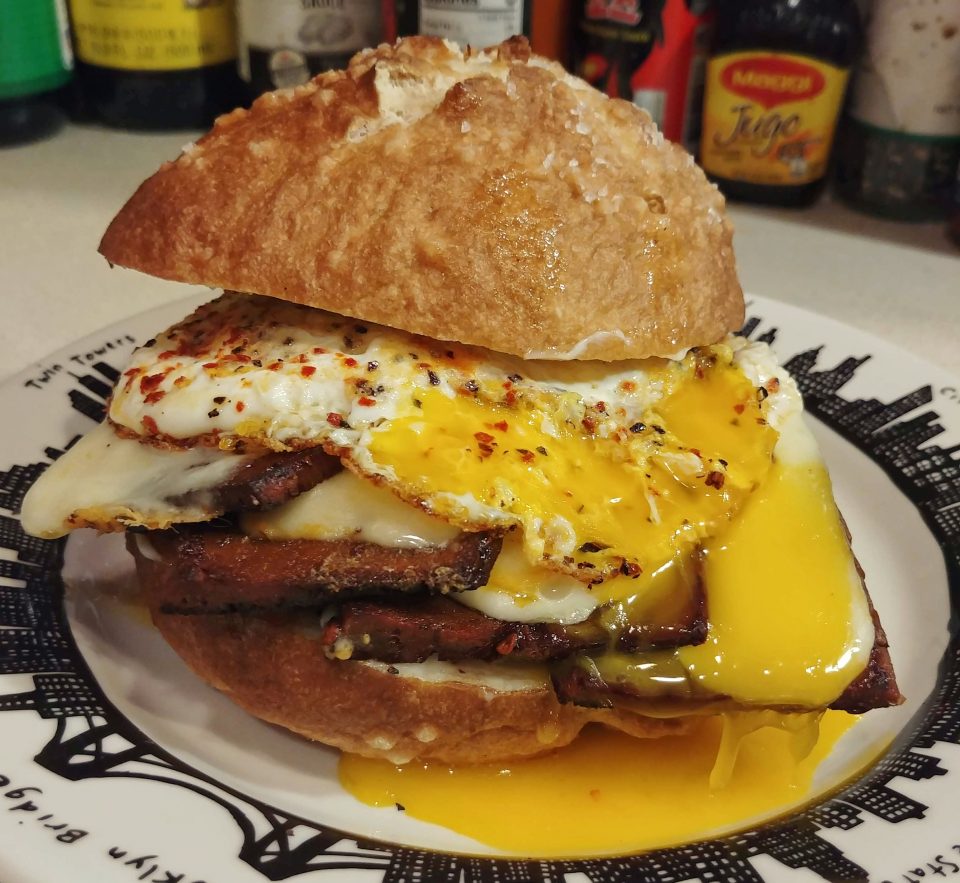 “Always take a big bite. It’s such a gorgeous sight”

I am a Cure fan one with one reservation: not the poppy Cure. I am firmly Team Moody Angst Goth Cure meaning the last studio album I liked was The Top and that really was not a strong album. I don’t deny there are plenty of great Cure songs after ’84, it’s just I prefer Mad Bob to Poppy Robert. I won’t skip any Cure song that comes up on a playlist, but if I’m picking out an album to play, it’s going to be Three Imaginary Boys or Pornography (which I consider to be their best). Of the Pop Era Cure, I have a soft spot for “In Between Days”, “Pictures of You”, and the song that inspired the name for this dish.

I can’t take credit for this music food pun. When I started the Music & Food project, a friend in Portland, OR sent me a link to a kindred spirit food cart & restaurant – Fried Egg I’m In Love. Not only do their sandwiches sound amazing, but the music puns they are using make me furious for not thinking of them before seeing their menu. Luckily, they did not have an actual “Fried Egg I’m In Love” sandwich and so this dish uses that name in tribute.

Like my previous breakfast sandwich, this is a riff on a traditional NY-style BEC (bacon, egg, and cheese). As I never have bacon in the house, I am always looking for something to sub in for the protein. Usually, it’s chicken or sausage, but as I now always have some form of seitan on hand, I decided that would make the perfect fried protein compliment.

I stand firmly against those who claim they can make vegetarian/vegan “bacon” by using liquid smoke. First of all, no. Secondly, JUST NO! Yes, I am well aware that liquid smoke is a somewhat natural product made from distilled wood smoke vapors, but that does not change the fact it is a shitty ingredient. It adds an overly chemical fake smoke taste regardless of concentration. I most often see it being used in vegetarian or vegan recipes as a way to add smoke flavor to fake bacon. That’s just pointless. If you’re going to be vegan or vegetarian, you’re going to have to live without the taste of bacon, plain and simple! Besides, there are a host of better ways to prepare non-meat proteins to sub for bacon and add umami to a breakfast sandwich.

Seitan sausage sliced into bacon-like planks is the perfect way to add that umami. For this sandwich, I went with my house favorite style: seitan chorizo. It’s got the bacon’s spicy smokiness and fries up beautifully. Other recommendations would be an Italian style or pepperoni style seitan. It also goes remarkably well with runny egg yolk, Muenster cheese, mayo, and a bit of hot sauce. No, it’s not seitan bacon. It’s actually something better. The time required to prep this sausage is rewarded with a breakfast sandwich you’ll love and make you turn your back on fake bacon forever.

Slice the pretzel roll in half. Spread mayo on the top and bottom inside and add a few dashes of hot sauce. Place the prepared roll on a plate and set it aside.

Heat 1 tablespoon of olive oil in a medium egg pan. Place the seitan chorizo strips in the pan and fry until crisp on one side. Flip and place the slices of cheese on the chorizo strips and cook for a minute. Transfer the fried seitan to the bottom roll.

Heat the remaining tablespoon of oil in the pan. Crack an egg in the pan and season with salt, pepper, and pepper flakes. Cook until the white gets crisp then flip and cook for 15 seconds to set the top white. Take care not to break the yolk. Place the over-easy egg on the seitan and top with the top bun.

Press down to break the yolk and create a glorious messy breakfast experience. Have plenty of napkins ready.