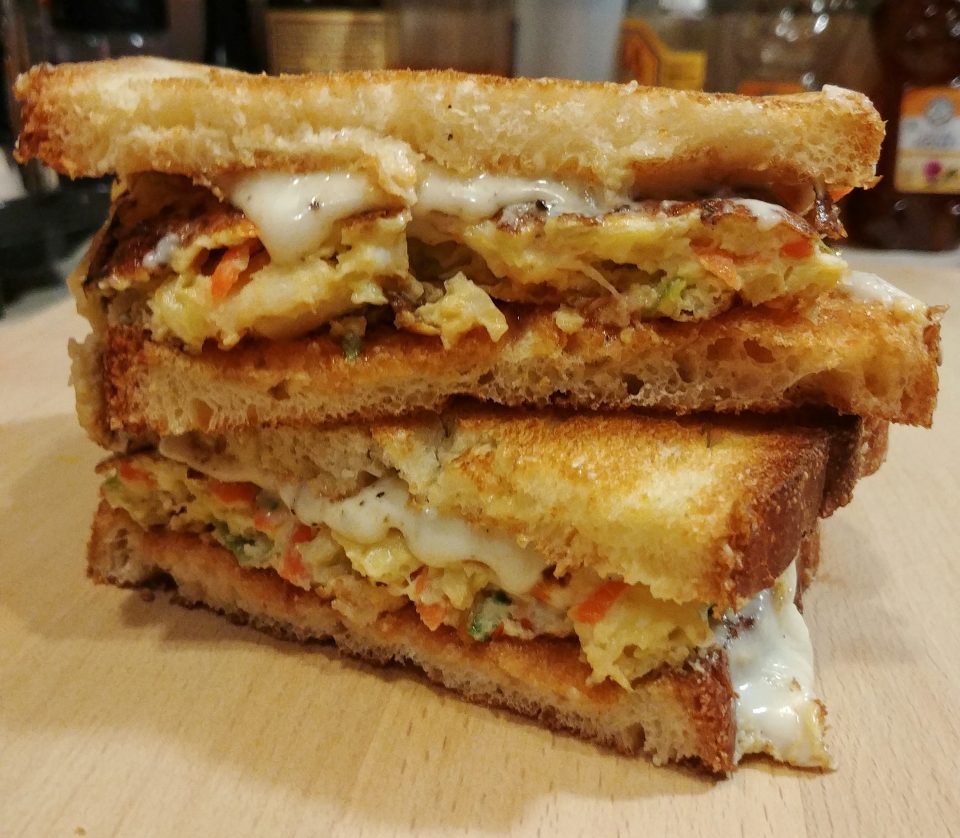 I’m not going to guarantee this will be the only K-Pop track for the Music & Food project, but I doubt there will be others. Not that there is anything wrong with K-Pop, but honestly BTS and Blackpink are pretty much my entire knowledge of the genre. This choice also serves as a bit of a karmic balance for my sandwich recipe appropriation.

I have a musical soft spot for boy groups that extends back to my earliest music fan days listening to the Jackson 5 and Osmond Brothers. During my record biz years, I found myself appreciating quite a few tracks from NKOTB, Backstreet Boys, Boys II Men, N*Sync, and a variety of other ’80s/”90s boy groups. I can even think of One Direction and Jonas Brothers tracks I think are catchy.

This is why I am fascinated by the BTS Worldwide Phenomenon. I remember a couple of years back, walking through Greenwich Village, and seeing a BTS poster in the window of the 3rd St. 7-11. My first thought was “Is 7-11 selling a line of Korean metrosexual hair care products?” When I discovered it was a poster for a Korean boy group (still have no idea what it was promoting), my next thought was, “Really?!? SEVEN members?!?! It takes SEVEN members for this group?” Hell, the only U.S. boy group with a member total close to BTS was The Osmond Brothers, and they actually played instruments. I get that it somehow works, and it appears every member had their fan base, but still, it seems a bit excessive and unnecessary. I guess this gives them an insurance policy against whichever member is Justin Timberlake and goes solo. With six other members, they can still BTS on.

I have an obsession with Asian street food videos on YouTube, especially Korean food cart vendors. I am fascinated by the skill, creativity, and general speed that incredible food gets created in a minimal set-up. Sure, we have places like Smorgasburg and street carts, but nothing truly equal to the food to be found on the streets in Asia. I also watch these videos and think, “There is no way in hell the NYC DOH would allow that!” Yet, there are lines, no one is getting sick, and delicious food is being made. Perhaps fewer food business regulations might actually be a good thing.

About a year ago, as I dropped into a YouTube street food K-hole, I came across one of the most brilliant breakfast sandwiches I had ever seen. The video was titled “Korean Grandmother’s Toast”. I’m guessing the name comes from the fact that in many of the videos I watched it was elderly women cooking the sandwich usually in a small stall or cart. I ultimately also found it more commonly referred to as “Korean Street Toast”, but honestly I find greater comfort in the idea of a grandma making it.

As I’ve been doing the mostly vegetarian thing of late, I skipped the meat in this version. I honestly think it would be overkill. The usual meat is a single slice of ham, heated on the skillet, and placed on top of the cheese. I chose American cheese for its melt factor and saltiness. It adds a nice gooey factor as well. Do not skip the sugar! It helps balance out the richness of the butter and eggs. Coupled with the mayo and sweet chili sauce, the sugar, like The Dude’s rug, really pulls this sandwich together. It’s the perfect sweet, spicy, savory, crunchy, gooey way to start a weekend day or cure a hangover.

Heat a large skillet over medium heat; add 2 tablespoons of butter and let it melt. Pour egg mixture, trying to make it a square shape. Cook until the bottom is cooked, about 2 to 3 minutes. Cut egg omelet into half, and flip over. Add a slice of American cheese to each omelet half. Cook another 2 to 3 minutes or until fully cooked.

While the omelet is cooking, toast buttered bread on both sides in a separate skillet or grill pan, about 2 minutes on each side, or until golden brown.

Spread mayo on one side of two slices of toast. Sprinkle about 1/4 teaspoon sugar evenly on the mayo. Place an egg omelet on top and sprinkle an additional 1/4 teaspoon of sugar. Drizzle with sweet chili sauce and season with salt and pepper. Cover each with another slice of toasted bread and cut it in half. Repeat for the other sandwich.