Ain’t Too Proud To Egg 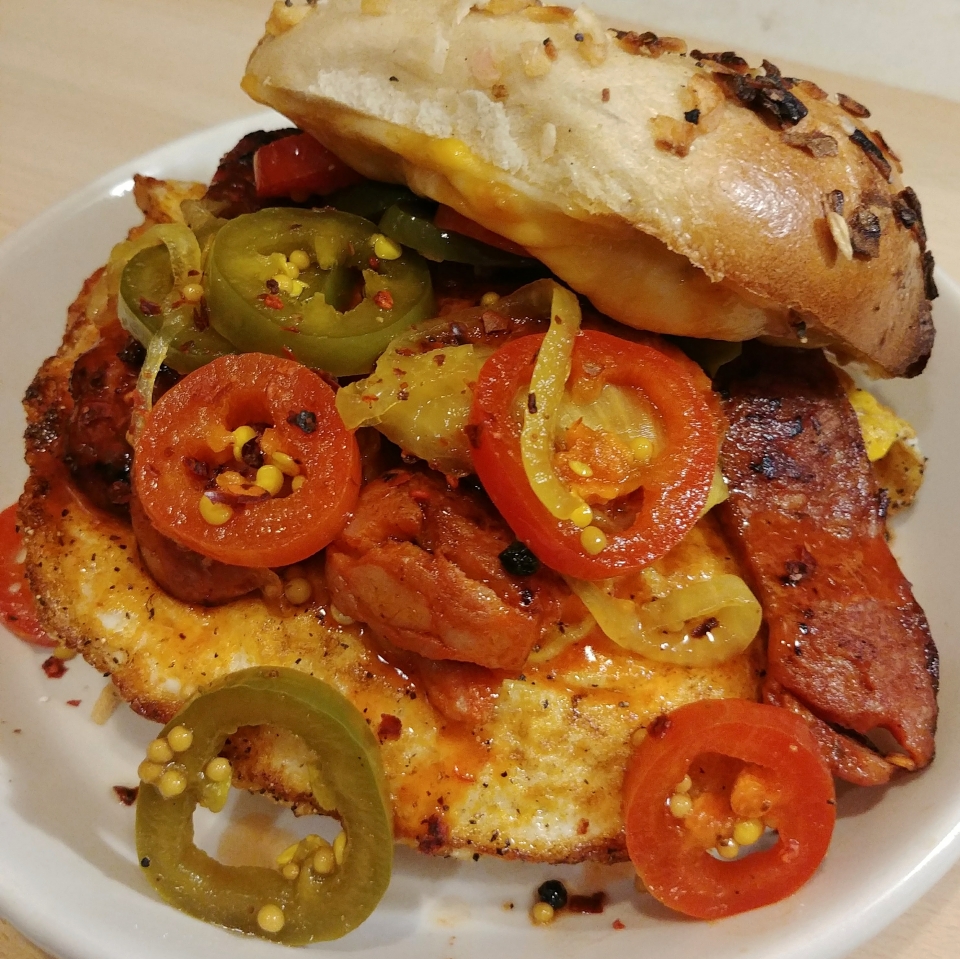 “Now I’ve got a love so deep in the pit of my heart, and each day it grows more and more”

The Bacon, Egg, & Cheese is the Rolling Stones of NYC breakfast sandwiches. Sure there have been many imitators or fancy poseurs vying for the title of “Greatest NYC Breakfast”, but none have the fanbase, longevity, or sheer infamy of the B.E.C. You do not want to go fancy with this sandwich. Decent but not artisan bacon cooked on the same grill as the over hard eggs and placed on a soft kaiser roll with plenty of melted American cheese, mayo, and hot sauce. It will cure basically anything that ails you and is available at every street corner deli in the city.

My version is the food equivalent of a garage band, heavily influenced by the Stones, who put out some great records, but, let’s be honest, no one will remember in 5 years. It’s a great sandwich, but it’s not going to be a game-changer or even make food history. It just does its thing curing hunger (and perhaps hangovers) with a spicy cover of the iconic B.E.C. It’s messy and a little all over the place.

The big key to this sandwich is using the chorizo fat to cook the eggs. This mimics the large bacon grease seasoned grill used for deli B.E.C.s and nicely tie egg and meat elements together. I opt for over-medium eggs as I prefer a slightly soft but not runny yolk. I made this on both the traditional soft roll and a bagel. I found the roll fell apart too quickly while the added density of the bagel held up nicely. Plus the choice of bagel adds a flavor element.

Heat your oven’s broiler. Cut the bagel in half. Divide the cheese between each half bagel. Place under broiler until cheese is melted and bubbly. When done, remove from the broiler and set aside.

Place an egg pan on high heat for 1 minute. Once the pan is hot, place chorizo in pan and cook, flipping strips over, until browned and fat has rendered. With tongs, remove cooked chorizo strips from the pan but leave the rendered fat.

Crack the eggs and carefully place them in the hot chorizo fat. Sprinkle with salt and pepper. Cook until the whites have set up completely, then flip the eggs and continue cooking. At this point, it’s a “you do you” scenario. Cook for a minute or so to have over easy. 2-3 minutes for over medium. Or, if you broke the yolks in the flip, just go for over hard. I usually go with over medium so the yolk is not hard but also not runny.

Place a couple of dashes of hot sauce on the bottom bagel. Transfer eggs from pan to bottom bagel. Top the eggs with the chorizo, hot sauce, pickled jalapenos, and pepper flakes. Finish with a sprinkle of salt and pepper and top with the other bagel half.