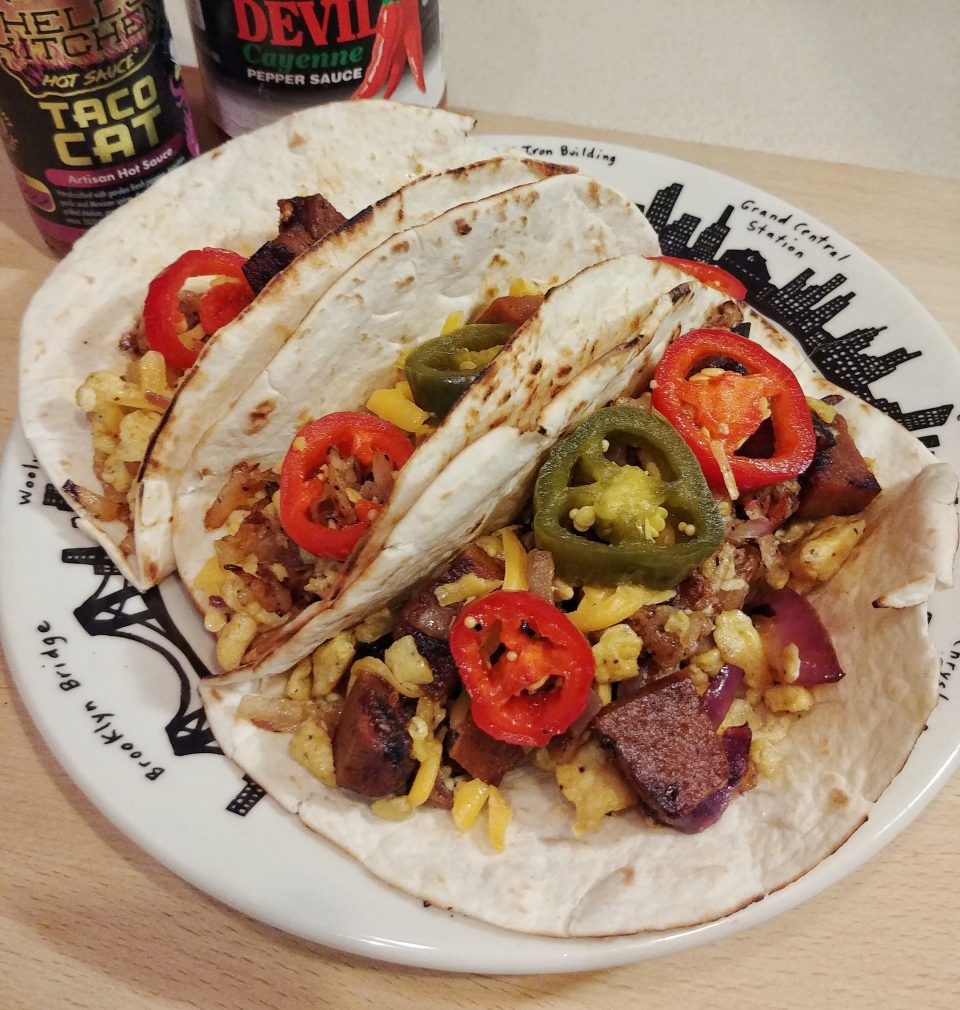 I’m fairly sure I became a Supertramp fan due to my brief flirtation with art and prog rock in high school. It may be hard to see how Top 40 tunes like “Give A Little Bit” or “Logical Song” or the inspiration for this recipe share any musical DNA with the likes of ELP, Yes, Alan Parsons Project, et. al. but that’s kind of the genius for a handful of Top 40 bands in this era. Those late ’70s / early ’80s bands took the musicianship of prog rock, dropped the sci-fi/fantasy for darker themes of love and relationships, and grafted on a solid dose of hummable earwigs. They created a sort of catchy literary pop-rock that found favor on both AM and FM radio equally. I’ve always felt Supertramp was the least appreciated of this crop of smart pop bands. Their catchy pop tunes are brilliant musical arrangements coupled with smart sometimes snarky lyrics. Essentially they were the British Steely Dan without ever getting SD-level accolades.

I am aware the lyric actually refers to “kippers for breakfast” but I believe it’s also a good fit for breakfast tacos. Breakfast tacos are “breakfast in America,” a melting pot of Mexican flour tortillas, Texas brisket, Midwest hashbrowns, Irish cheddar, and scrambled egg.

The rare times I find myself cooking breakfast, it’s usually one of three things: breakfast sandwich, breakfast burrito, or breakfast taco. The fact two of my three go-to items are of Tex Mex origin is not surprising. I’m a sucker of anything in a tortilla. While I have found quite a few solid breakfast burritos in Brooklyn, I can honestly say most breakfast tacos have been lacking. So when the craving hits, I’ll be making my version of a Texas breakfast taco.

My philosophy is to keep it simple and vegetarian. My recent forays into the realm of seitan making afford me the opportunity to make a breakfast taco with a quintessential Texas ingredient: brisket. Granted, this brisket is seitan, not beef, but it’s braised in the oven like a Jewish brisket then smoked on the grill as per Texas tradition. The result is a lovely meat substitute and perfect for a taco. I cube a few slices, coat with some oil, and rub, then fry to make a sort of faux burnt ends.

The eggs need to be a good hard scramble. None of this Gordon Ramsey fancy French technique here. Work toward a fluffy scrambled curd with no wetness. Complete the diner holy trinity – eggs, meat, and potato – I opt for some quick hashbrowns. Shred a potato, squeeze out the moisture, mix with a little red onion, salt, pepper, and paprika. Then fry in oil in a cast iron.

Combine the eggs, brisket, and hashbrowns into a unified mix and you’re all set to assemble. Always toast your tortillas! I do it over an open gas flame with tongs, but I like to live dangerously. A hot skillet is the safer bet. I keep the toppings to cheddar, a few Rock Candy Jalapenos, and a bit of hot sauce. A simple and classic Tex-Mex way to start another day in America or really anywhere in the world.

Wrap the shredded potatoes in a paper towel or clean kitchen towel and squeeze out as much moisture as you can. Place the potatoes in a medium bowl with the red onion, salt, pepper, and paprika. Toss to combine.

Add 1 tablespoon of the vegetable oil to a heavy skillet – preferably cast iron – over medium heat. Let the oil get hot then add the red potatoes pressing out into an even flat layer. Cook for a couple of minutes until golden brown, flip, and continue cooking until the other side is golden. Set aside and keep warm.

Rinse the potato bowl and place the cubed brisket in it. Add the remaining tablespoon of vegetable oil and your spice rub. Toss to completely coat.  Place a non-stick skillet over medium heat. When the pan is hot, add the brisket cubes and spread them into an even layer. Cook them, stirring occasionally, until they get browned and crispy. Remove from the skillet and set aside. I put them back in the bowl I used to season them

Put the skillet back over medium heat. Melt the butter and add the scrambled eggs. Season with salt, pepper, and a couple of dashes of hot sauce. Cook the eggs, stirring often to form large curds until they are completely cooked through. There should be no wet egg left in the pan. Combine the eggs with the hashbrowns and fried brisket.

Toast the tortillas in a pan or – if you live dangerously as I do – over an open flame. Set aside.

To assemble the taco, place a bit of cheddar on a tortilla. Top with 2 tablespoons of the egg mixture. Top with a bit more cheddar, 3 slices of jalapeno, and a drizzle of hot sauce.