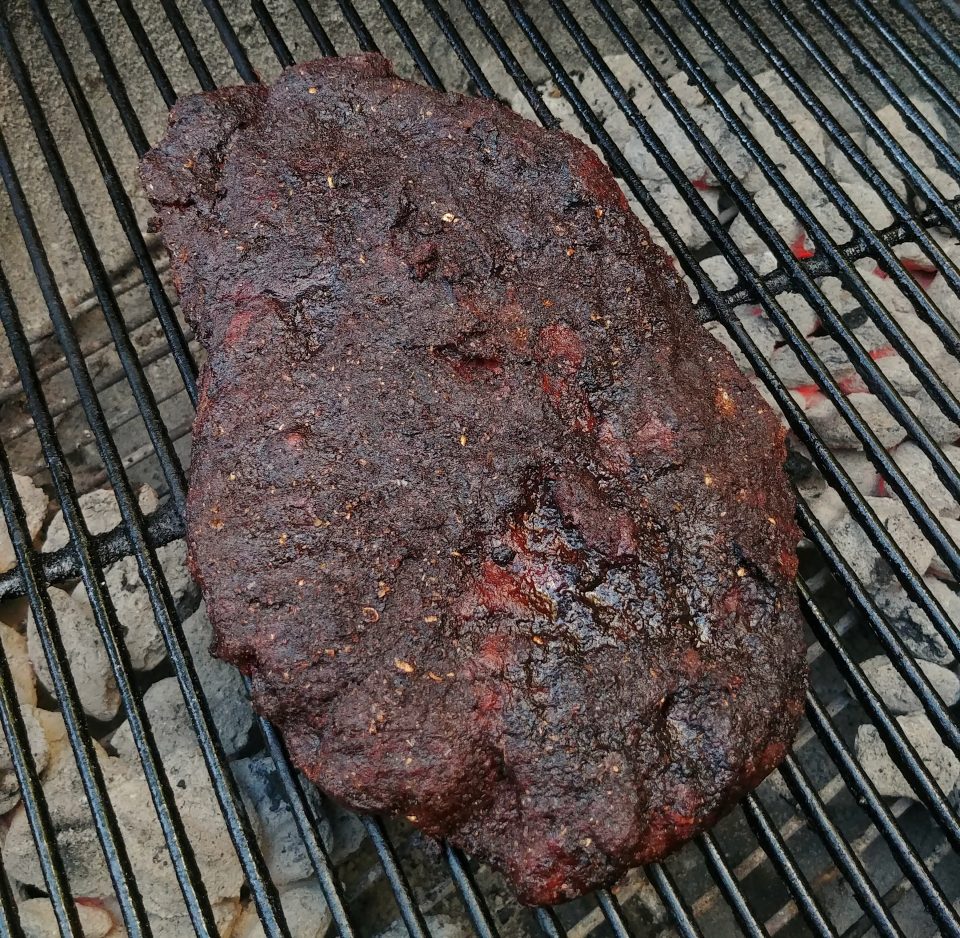 “People see you having fun just a-lying in the sun. Tell them that you like it this way.”

Bachman-Turner Overdrive, or BTO if you will, featured heavily in my ’70s high school “cruisin’ in my Camaro” soundtrack. Growing up in Michigan meant a heavy dose of Canadian rock and few dominated the airwaves as much as BTO. While writing this, I’m listening to their catalog and coming to the realization they are one of those bands best played in a car while driving. Like Steppenwolf, Deep Purple, or Foghat, this is highway music. Sure, you can sit in your living room, banging out a blog post about how a song from your school days became the inspiration for a recipe title, and listen to BTO. Or maybe you could sit in your backyard, drinking bourbon & beer while smoking vegan “brisket” and listening to BTO. Neither of those will come close to the sheer joy of “Taking Care Of Business” cranked to 11 on your car stereo while driving down a clear stretch of Michigan highway between Flint and Detroit in the late ’70s while singing (off-key of course) at the top of your lungs.  BTO is not a band I listen to often, but when I do I am filled with the sort of nostalgia for driving that ignores the sheer annoyance of owning a car in NYC.

Let’s get this out of the way upfront. I spent about 7 years of my life as a professional BBQ cook. I know this is not brisket. Brisket is a cut of beef requiring a long slow cook to turn into delightful mouth-watering carnivore heaven. This is a vegan analog using seitan shaped like brisket, braised like brisket, and smoked like brisket to create a brisket-esque experience. No, this is not going to replace the godlike work of Hometown BBQ or Franklin BBQ, but for those looking for a meat or budget alternative (not to mention a lower culinary skill level), this is a solid replacement. 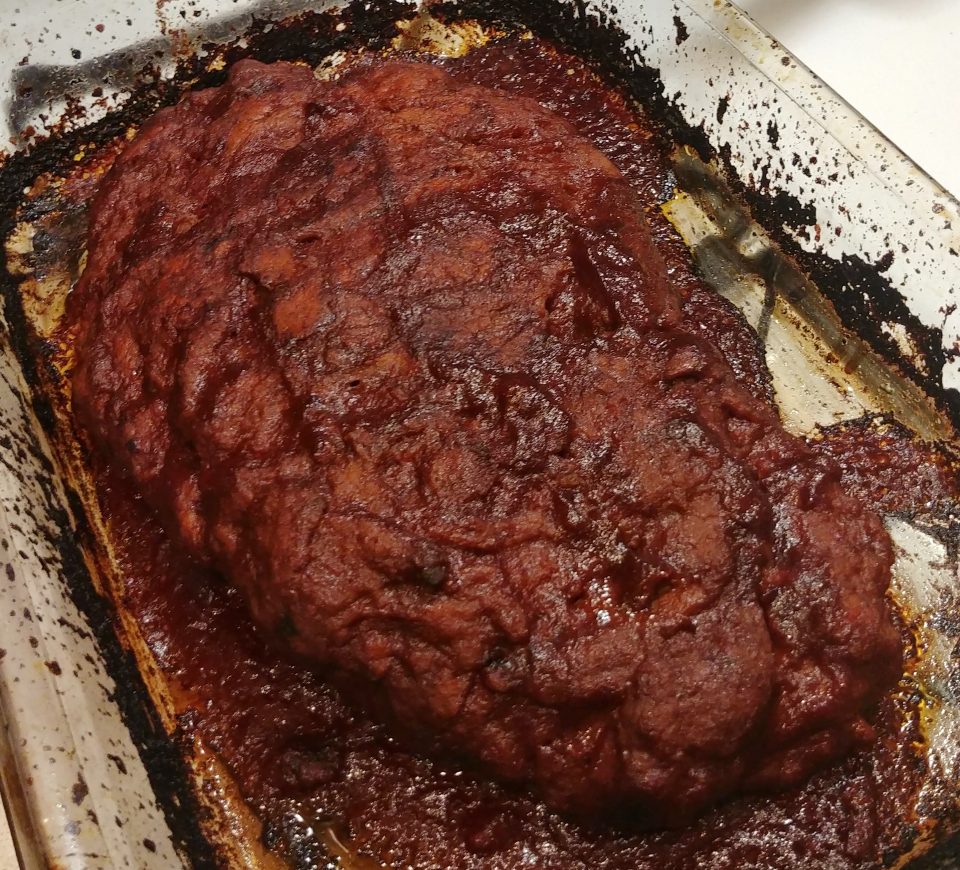 Traditional BBQ beef brisket can take up to a day to be meat perfection. This recipe requires considerably less time investment, but still requires some time. This as a mash-up of a braised Jewish brisket with the smoke & grilling of a BBQ brisket. One could easily stop at the braised part of this recipe and have a perfectly brilliant saucy vegan version of Mrs. Maisel’s signature dish.

To move into the “BBQ” realm and prep this braised beauty for smoking, I threw back to my Q days and my traditional brisket prep. Rub the brisket all over with yellow mustard and then dust in your preferred rub mixture. For this particular recipe, I went with a cowboy-style rub to amp up the savory notes with coffee, cocoa, & cinnamon.

I found about 45 minutes on the grill, brushing with a bit of the BBQ sauce and flipping halfway through, was the sweet spot. It may seem a bit under smoked, but that crust will firm up as it cools. Let it rest for at least 15 minutes before slicing.

Now I know this is not going to fool a carnivore. It does not have the meaty fall apart insane nirvana of a 20 hour smoked beef brisket. What it does have is a ton of flavor, a mouthfeel “meatiness”, and killer flavor. It makes for a great BBQ sandwich and the leftovers keep quite nicely in the fridge. I also found it to be a great substitute for bacon on a BEC.

Prepare a baking dish by coating lightly with oil. Set aside. Preheat oven to 375°F.

Mix the wet and dry batches in separate bowls. Combine dry mixture with half of the wet mixture.  Mix until combined completely. Knead for 3 minutes until all is mixed thoroughly and the dough has an elastic texture. Let the dough rest for 10 minutes.

Form into a rough oval shape and place in a baking dish. Lightly coat the raw seitan with oil. Add rest of braising liquid around the casserole dish, pouring over raw seitan. Place in oven and bake for about 25 minutes. At the 25 minute mark, flip loaf over. Place back in the oven for another 20 minutes.

Remove the seitan a few minutes before it’s done and baste the seitan with some of the remaining liquid in the dish. Place back in the oven for another 5-10 minutes. The liquid should be almost evaporated and thickened. Remove from the oven and leave to cool for a few minutes.

Set the grill up for indirect cooking with charcoal banked on each side and the middle empty. The temperature should be around 300°F. Toss on some wood chips (hickory or oak work best) for some extra smoke. Coat the seitan in mustard & dust with BBQ rub. Place on grill and smoke roast,  brushing with sauce to glaze every 10 minutes, until a dark crust forms.

Combine all ingredients in a bowl. Mix thoroughly to combine. Store in an airtight container.

Mix the ketchup, both of the vinegar, soy sauce, garlic powder, onion powder, and sugar together in a saucepan and bring to a simmer over medium heat, stirring occasionally. Remove from the heat, and stir in the Guinness. Let cool, then transfer to a jar, bottle, squeeze bottle, or however you want to store it. Store in the refrigerator for up to 2 weeks.