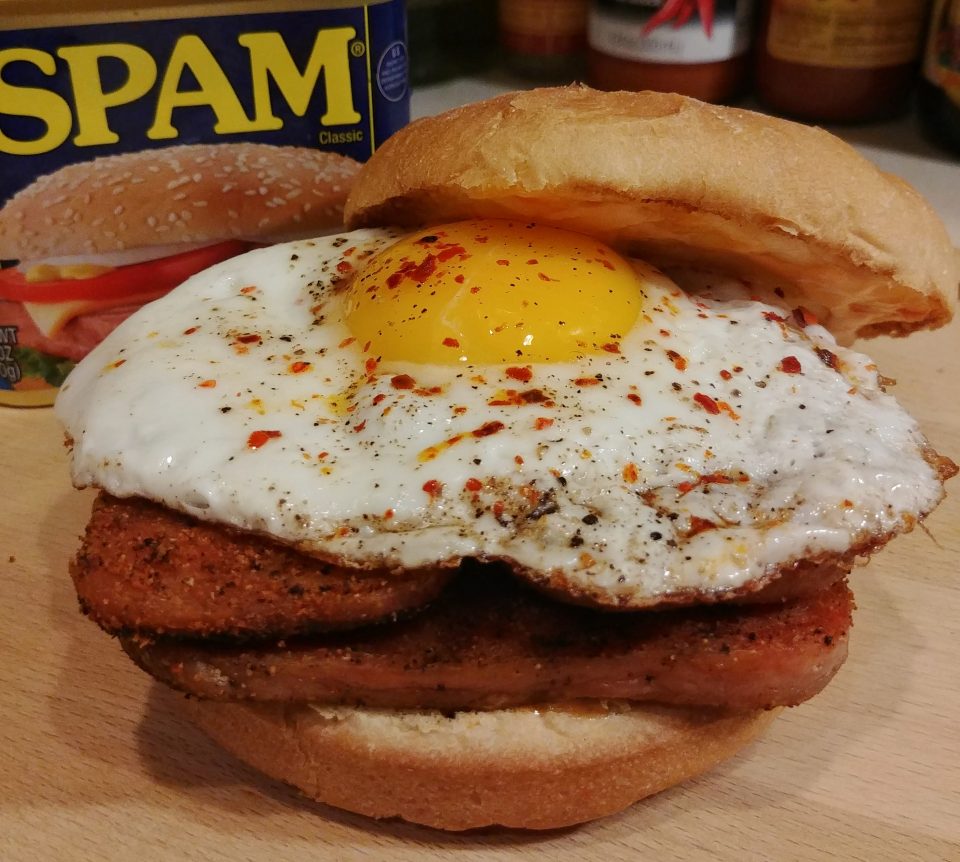 “I looked out the window seen his bald head, ran to the fridge and pulled out an egg.”

The inspiration for this recipe was a toss-up between The Beastie Boys and The Beatles. Both have songs featuring “Egg Man” though technically it is a lyric for The Beatles and a song title for the Beasties. So, I decided to go with the Beasties as we are approaching the 30th anniversary of Paul’s Boutique and I actually have a better egg dish for the Beatles.

I was working in the record biz when Paul’s Boutique hit stores. By any measure of 1989 post-License To Ill logic, it was either a bold or suicidal career move. A tepid critical reception (but “fuck critics” – amiright?) and weak sales should have ended the Beasties career, but here’s the rub – Paul’s Boutique is actually FUCKING GENIUS. If License To Ill bought punk rock to hip-hop, Paul’s Boutique is equal parts Sgt. Pepper’s Lonely Hearts Club Band, Magical Mystery Tour (where we hit the “Egg Man” versus “I Am The Walrus” choice) and Pet Sounds filtered through The Dust Brothers sampling mania and slapping old school hip-hop in the face. I hate the term “concept album” (due mostly to my teenage obsession with the Alan Parsons Project), but that’s exactly what this is. It’s a dense sometimes difficult listening album that pushed the genre forward though it would take several years to actually understand its influence on modern music. Much like a cult film dismissed when released but revered later, I believe ANY modern hip-hop fan needs to acknowledge the bravery and openness the Beasties had to create the insanity of Paul’s Boutique, and celebrate the opportunities they paved the way for.

In what might be a VERY labored metaphor, SPAM is the Paul’s Boutique of canned meat products. It’s widely criticized, has a devoted fan base, but has ultimately helped define the genre to the extent it’s a generic term for all canned meat products and even junk email. It can be argued Post-World War II Asian-Pacific cuisine was greatly influenced by the SPAM left by U.S. troops.  I haven’t had SPAM in literally decades. It’s definitely a leaner food product with less of that alien jelly substance I remember from my youth. It also seems to have less of the old school pungent SPAM aroma. It’s still pretty questionable as an ingredient, but for the sake of food punnage, this project, and culinary curiosity, I took one for the team. I have certainly lost any residual SPAM cravings.

This is yet another riff on the classic NYC BEC. I doubt many bodegas are stocking SPAM for a breakfast sandwich, but perhaps they should. For better or worse, SPAM has all the salty goodness of bacon with the added punch of the “SPAM factor” meatiness. I chose to grill this with a Buffalo Spice rub as I just happened to have that in the pantry (and made grilled SPAM for another recipe). Any good BBQ pork seasoning would work – even just simple salt, pepper, and paprika.

Go with a crispy sunny up egg. Olive oil – non-stick pan – a bit of patience. A fried egg should be FRIED! Get that crispy brown underside that packs a flavor punch. I know many folks hate a runny yolk, but that’s decadent saucy goodness here. Plus, if a breakfast sandwich isn’t messy, it isn’t worth eating. My upgrade for the usual mayo-hot sauce combo on a BEC is mixing a bit of sambal oelek into my mayo. Far better than sriracha with the added garlic kick. Otherwise, just go with the usual mayo and Frank’s Hot Sauce combo. Finish with a sprinkle of sea salt and Aleppo pepper if you want to get fancy.

Place the mayo and Sambal Oelek in a small bowl and stir to thoroughly combine. Set aside.

Set up your grill for 2-zone cooking and bring the temperature up to 350°F. While the grill is coming up to temperature, lightly coat the spam with the oil and season with the Buffalo Spice on both sides.

Cook an egg in the style of your choosing. I prefer sunnyside up for this sandwich as the runny yolk adds a sauciness and richness to the spam. If you’re not into the runny yolk thing, go with an over hard egg though you’ll be missing out on some serious decadence.

Combine all ingredients in a medium bowl and mix thoroughly. Store leftovers in an airtight container.