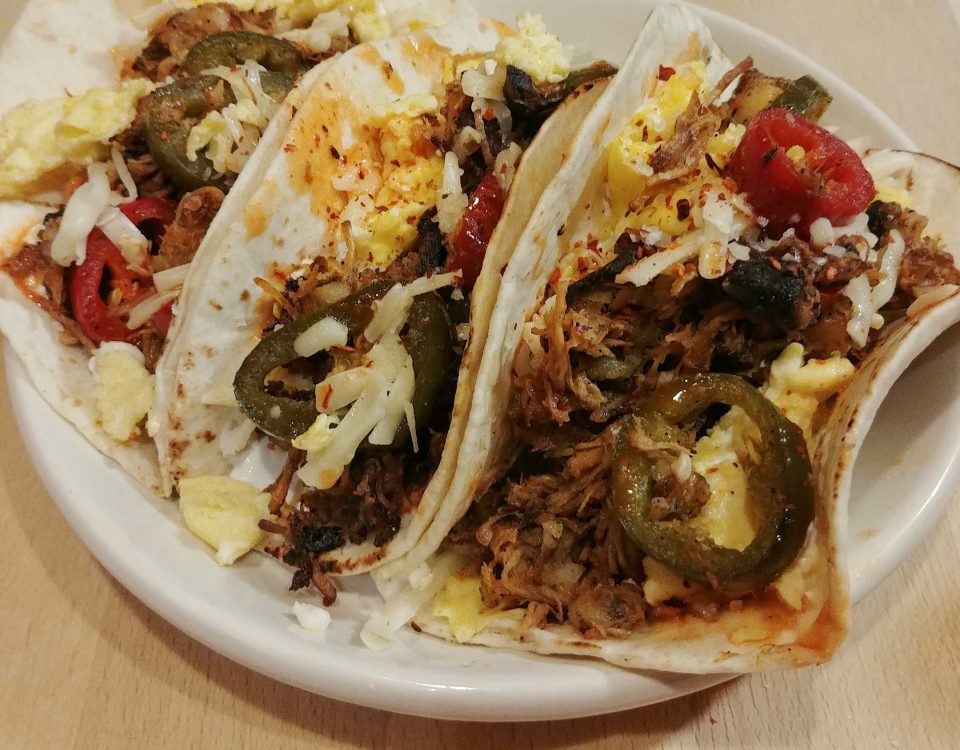 “Mojo Thunder – fever in my veins”

As previously stated, I KNOW the pork dish is pronounced “Mo-Ho” but it’s spelled the same and I’m just rolling with that.

When I started the Music & Food project, I never thought it would expose me to so many new bands. For the majority of the recipes, I have a song or band in mind before I start. Recently, I have found myself with great recipes but no actual song or band inspiration. This leads me to Google and Spotify looking for a song that might fit my obsession with puns, music, and food. This has led me to discover Los Chicharrons, Slothrust, and dig deeper into the Clap Your Hands Say Yeah catalog.

I now add The Peach Kings to that discovery list. Like a lot of current rock bands, they don’t fit neatly into a genre. A little retro, a little poppy, a little shoegaze, a little bluesy grunge. “Mojo Thunder” is a sinister slow-burn rocker that fits well as the inspiration here. A morning-after hangover vibe that requires a breakfast taco cure. It also caught my attention as I am a big fan of Celestial Seasonings Morning Thunder which kind of sounds like Mojo Thunder.

I’m generally not a breakfast person. I am DEFINITELY not a brunch person. Usually, a large French press of coffee is more than enough to get my day started. When the rare occasion arises that I do want breakfast, it generally tends to be some form of sandwich or taco. I don’t have the culinary drive in the morning to do a ton of prep or make fancy sauces or worry about techniques and timing. I want something with about 3-4 ingredients that can be done in a few minutes.

In this case, it’s a taco based on some leftover mojo pork I had in the fridge. I love skillet fried potatoes in a breakfast taco though I rarely take the extra time to make them. I figured out how to cut the time down by making the dice fairly small and cooking them only partially before adding the rest of the filling to the pan. Once the potatoes are about halfway done, add the pork, jalapenos, and jalapeno brine and continue cooking until the pork is crisped and potatoes are tender. While the pork is finishing in the skillet, melt a bit of butter in an egg pan and scramble the eggs. I prefer my eggs fluffy and fully cooked as opposed to soft scramble. I don’t believe a soft scramble works well in a taco, but of course, you do you. I go with a very simple finish of sea salt, hot sauce, and a little sour cream.

In a large cast-iron or non-stick skillet, heat the olive oil over medium heat. When the oil is hot, toss the potatoes in the pan. Sprinkle the paprika, garlic powder, salt, and pepper over the potatoes in the skillet. Stir to combine the spices and potatoes and coat with the hot oil. Let cook, stirring occasionally, until the potatoes start to lightly brown.

Add the pork, jalapeno, and jalapeno brine and stir to combine with the potatoes. Spread the mixture out into an even layer in the pan, and let cook undisturbed for 3 minutes.  Using a metal spatula, chop up the pork & potato mixture, scraping the crispy bits off of the pan, and spread into an even layer. Let cook while you scramble your eggs.

Use whatever method you prefer for scrambled eggs. I prefer to scramble two eggs without any additions (no water, no milk, no cream) in an egg pan with butter. I go for the fully cooked (but not brown) fluffy style of a scramble. Soft scrambled might be great for a sandwich, but I just don’t dig it on a taco.

When your eggs are done, spread a bit of sour cream on a tortilla. Add 1/3 of the pork & potato mixture, 1/3 of the eggs, sprinkle some sea salt and Aleppo pepper and finish with a few dashes of hot sauce. Repeat for the other two tacos.