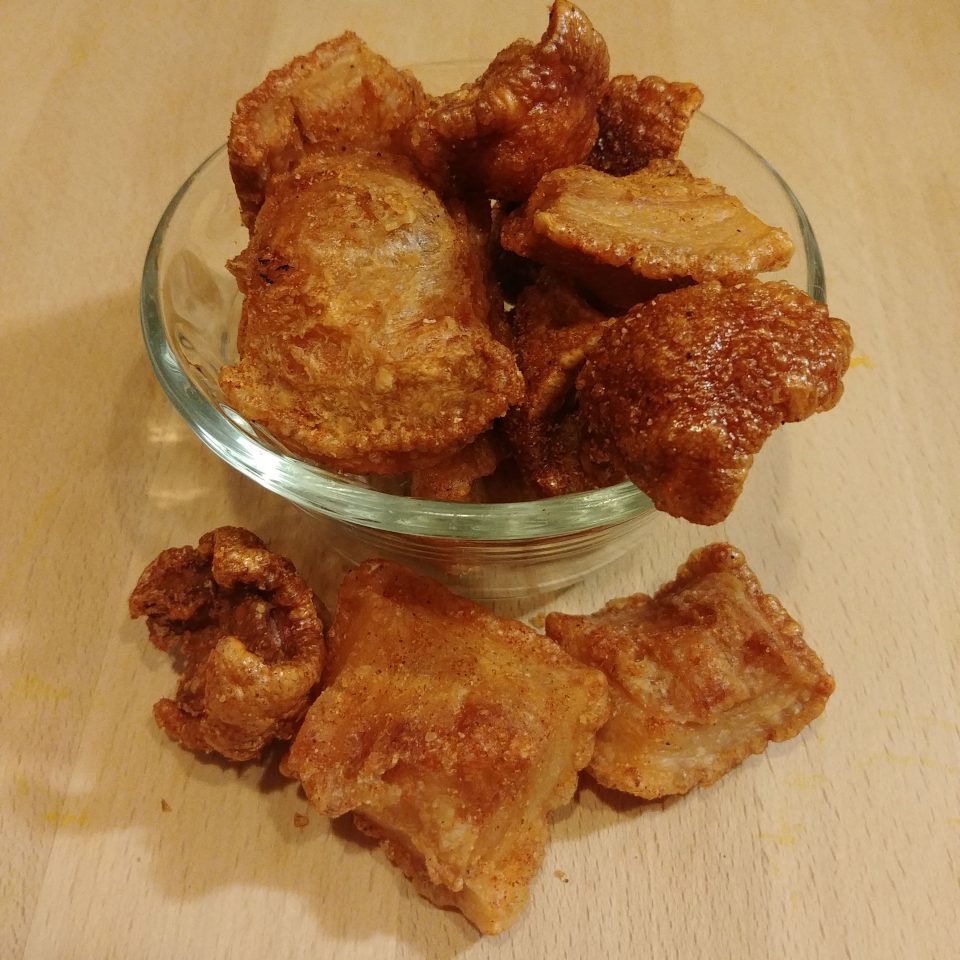 “Oh, yea Mami – this ain’t over yet – chicharrons boogaloo!”

One of the side benefits of the Music & Food project is discovering bands I’ve never heard or only marginally knew. For the most part, I have a clear song and band inspiration in mind. On those rare occasions where I do not, I start searching on Spotify for a possible fit. This has led me to discover Slothrust and Clap Your Hands Say Yeah and now Los Chicarrons.

Los Chicarrons is a production duo creating Latin-tinged downtempo head-nodders that lie somewhere between the dancefloor and chillout room. I had started with a different track but as I listened to their catalog, this showed up. I’m fairly sure it has appeared in my Spotify Discovery but never really made a connection. As an added bonus, the track and album titles are undeniably genius. I’m still doing the deep dive in their catalog, but if production-driven quirky downtempo is your thing, definitely give Los Chicharrons a try.

One of my guiding culinary tenants is the “make or buy” decision. Essentially, does making the item from scratch justify the work and final product compared to something you could buy at the store. Pickles are a “Make”. Ketchup is a “Buy”. I suspected I knew the answer for pork rinds (aka chicharron) before I even started this experiment.

As I had recently made a mojo pork shoulder that came skin-on, I decided to try my hand making pork rinds at home.  I had done something like this a couple of times in a commercial kitchen with lovely commercial deep fryers, but never at home. Mostly it’s because I REALLY hate deep-frying at home. Once you’ve had the joy of a commercial deep fryer, you really don’t want to fry in anything else. Plus there’s the whole smell and used oil thang and the general mess. So, this experiment already a major mark against it.

As with most of my recipes R&D, I took to the internet to see what others have done. There was a remarkably wide range of variations mostly resulting from almost every culture having some form of fried pork skin. I finally settled on a method that first dried the skin in the oven, then deep-fried in medium hot oil. This process helps render any excess fat on the skin (which will impair frying) and helps remove some of the moisture so the skin will puff up. It also required a low and slow oven for 2 hours which added yet another mark against this process.

Once I had my dried skins, I set to deep-frying them which to be honest was extremely straight-forward. It was deeply satisfying to see the skins puff up and float around in the oil. This step was relatively quick – about 5-7 minutes depending on the piece of skin and resulted in pretty solid pork rinds. I hit them, straight out of the fryer, with a little Buffalo Spice, let them cool, and snacked on them while cooking dinner.

The big question, of course, is whether they were better than store-bought. As I live in a Latin neighborhood, there is no shortage in variety of chicharron available. A wide range of flavors (chili lime, salt vinegar, BBQ, etc.) and styles (puffy, crunchy, puffy/crunchy, etc.) can be found at every bodega in the area. I’ve worked my way through most of the offerings in my area and have only been disappointed about 10% of the time.

In the final analysis, if you’re running a restaurant or bar with a kitchen and access to a lot of pork skin, it makes perfect sense to save on food costs and make pork rinds. For the average home cook with skin from a pork shoulder, use it to make some pork skin stock.

On the home spectrum of “Make or Buy”, pork rinds are definitely a “Buy”.

Preheat oven to 250F and set a wire rack over a baking sheet.

Using a very sharp knife, cut pork skin and fat into long strips, about 2 inches wide. Score the fat on each strip every two inches. Insert knife carefully between skin and fat on one end of the strip and remove a portion of the fat (you will end up with a thin layer of fat still on the skin and that is fine).

Once that first part of fat is removed, you can hold the skin in one hand as you slide the knife down the strip to remove the majority of the fat. Again, a little fat still clinging to the skin is okay. When the fat has been removed, cut each strip into 2-inch squares and place, fat-side down, on wire rack. Bake 2 hours, until the skin is completely dried out.

When baking time is up, heat oil in a heavy-bottom pan. The oil should be quite hot but not bubbling. Add pork rinds and cook until they bubble and puff up about 6 to 7 minutes turning a couple of times as they cook. Remove and drain on a paper towel-lined plate. Sprinkle immediately with Buffalo Spice.