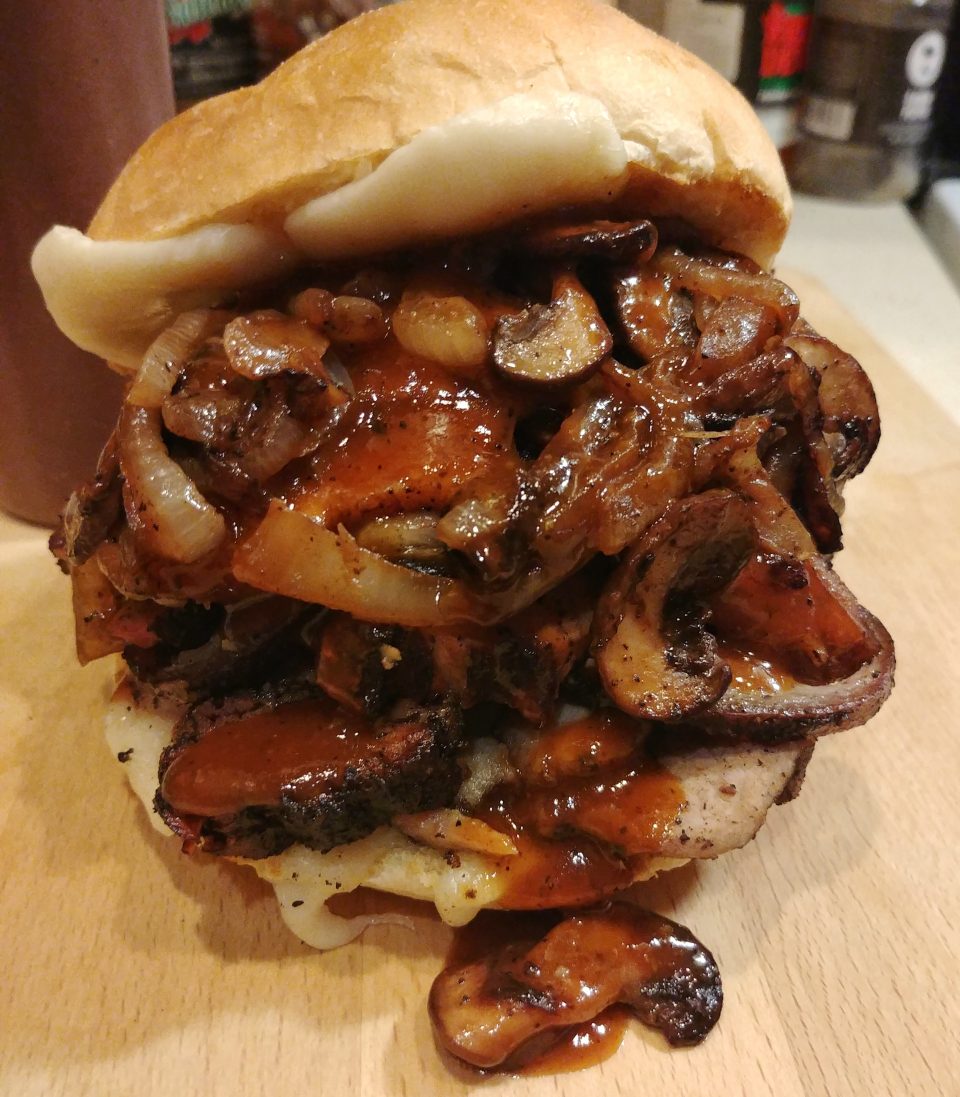 “Shoot me the pot and pour me a shot”

There was a time when cooking pork was pretty much my life. A decade back, I naively pivoted out of web design and into making BBQ for a living. Cherie (of We Can Tour That fame) and I had a small Q joint in upstate New York called Cha Cha Hut BBQ. In addition to the great from-scratch food we served, the curated Spotify playlists that served as the soundtrack for the shop were my other source of pride. Too often, BBQ joints default to blues or country or blues AND country. We had playlists that caused one customer to ask: “Did you just go from Carly Rae Jepson to Monster Magnet?” The answer was “Yes – yes we did.”

I am a fan of cover songs. Especially if those covers take the original song in a completely different direction. That’s the major reason The Puppini Sisters featured prominently in the Hut’s playlists. Loosely modeled after The Andrews Sisters, The Puppini Sisters not only cover appropriately jazzy standards of the WW2 era, but they also apply that jazzy swingatude to modern pop classics. Kate Bush’s “Wuthering Heights”, Blondie’s “Heart Of Glass”, and a crushingly stellar swing jazz version of The Bangles’ “Walk Like An Egyptian” put the Sisters in heavy Hut rotation. It never failed to amuse me when a customer, mid-pork sandwich, would suddenly realize that swinging harmonized ditty was in fact the Sisters covering Beyonce’s “Crazy In Love.” So when it came time to make a sandwich using a mocha version of the Hut’s Java Jive rub, I knew I had to go with The Puppini Sister’s version as the theme song.

You might think this was a re-creation of a sandwich from the Hut or my BBQ days, but it isn’t. It was inspired by the Mythical Kitchen Chocolate Coffee French Dip recipe. Really, the only elements this recipe shares with that one are pork, coffee, and cocoa powder. This is what I love about the cooking and recipe community. An endless source of inspiration to make you look back on previous recipes and recombine into something new. While I had intended to make something similar to the Mythical Kitchen recipe (and maybe get a shout out because, you know, food is a social media thing now), in the end, I made a sandwich I now regret never making in my BBQ days.

In the “What Meat Does Frank Cook At Home?” ranking, pork comes in dead last. That’s really a shame because every time I cook pork I think, “I need to cook more pork.” It’s not even a BBQ PTSD/Avoidance thing. It’s just I never really think about it when hitting the market. (In case you’re wondering, the ranking is: chicken, beef hot dogs, ground turkey, ground beef, steak, beef roast, then pork.) Considering I live in a Latin neighborhood, there is almost always someplace with a bone-in pork shoulder on sale. Trim off the skin (save for chicharrones), de-bone (save for a ramyun stock), and season the shoulder roast for an afternoon of grilling or toss in an Instant Pot if you’re in a rush.

Unlike a usual BBQ pork shoulder cooks where you’re going for that long slow pulled pork cook, this is designed for a sliceable roast pork result. I didn’t actually note the total cook time, but I believe it was around 1 1/2 hours plus the resting time. I made the caramelized onions and mushrooms before roasting the pork because you are going to want to be in the kitchen monitoring the skillet. I mean, sure, you could put the pork on the grill then go back inside to make the onions & mushrooms, but that sort of defeats the joy of hanging out by the grill with an adult beverage.

What I really love about this recipe are the two throwbacks to the Cha Cha Hut. The first is the Java Jive rub. I designed this specifically for roast pork loin, but it works nicely on any pork. It also happens to be amazing on grilled steaks. The combination of coffee, sugar, and cinnamon doesn’t sound like it should work for grilling, but it truly does. It forms a beautifully flavorful crust. Though I never actually used Java Jive for any Hut dish, we did sell a ton of it in jars. For this sandwich, I’ve added a bit of cocoa to the mix. The result is even better than the original.

Maple Espresso is the other Hut throwback and one of my favorite sauces. Vaguely inspired by red-eye gravy and specifically designed for the Hut’s smoked turkey breast, it was once described as “a kind of Adult Arby’s Sauce.” I was assured that it was a compliment. A very untraditional style of BBQ sauce, it’s a little sweet and a little bitter with a nice Q sauce acid backend. It started as one of our table sauces, but given its popularity and rather high food cost, we ended up having to portion it out to customers. As with the Java Jive, we ended up selling a ton when we starting bottling sauces.

This is not a pretty sandwich. This definitely not a healthy sandwich. It’s a big messy ugly delicious pile of savory pork, rich mushrooms & onions, and decadent maple espresso sauce barely contained between two pieces of bread. It’s comfort food in the purest form: satisfying, sloppy, and nap-inducing.

Rub the pork with the olive oil and coat with the rub. Let rest at room temperature while starting the fire.

Remove the roast from the grill and let rest 15 minutes checking the temperature again to ensure that the meat has reached 145 degrees.

Place all of the ingredients in a bowl and mix thoroughly. Store in an airtight container.

Place all of the ingredients in a medium saucepan. Whisk to combine thoroughly. Turn the heat on to medium-high and bring the mixture to a boil. Whisk and then reduce heat to a simmer. Simmer 15 minutes stirring occasionally. Let cool to room temperature before using. Pour into an airtight bottle or jar and store in the fridge.

Heat butter on high in a large saute pan until melted then add onions and mushrooms. Sautee for 5 minutes until slightly translucent, then add 1 tsp spice mixture and continue to saute for 20 minutes, until dark and caramelized. Remove from saute pan and set aside.

Reduce heat to medium. Add 3 tablespoons of water to the pan and scrape up any extra bits. Place the sliced pork in the pan and cover it with a lid. Let pork reheat for 2 minutes then flip. Reheat one more minute.

Combine the minced garlic and salt on a cutting board. Using your knife edge or a pastry cutter, mash the salt and garlic into a paste. Mix the paste into the softened butter.