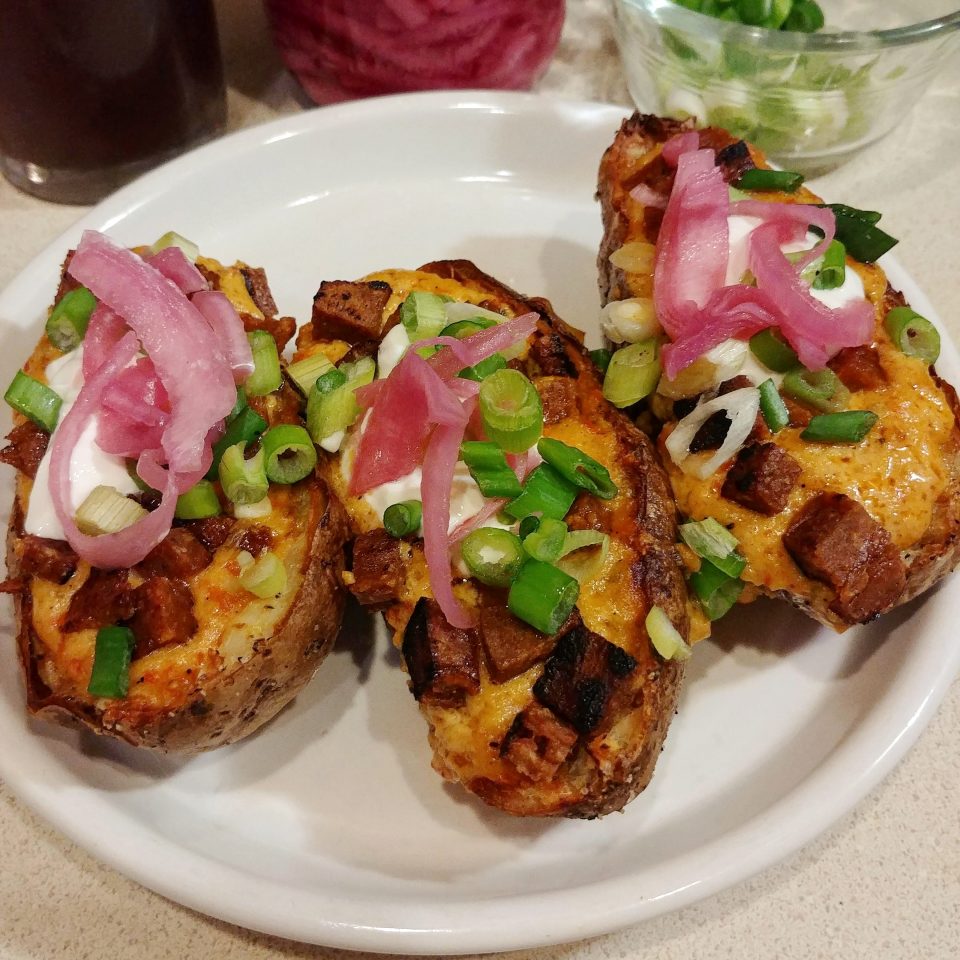 “I can’t get to sleep. I think about the implications.”

Men At Work are one of those ’80s bands I don’t often think of until a random track shows up in a playlist. Essentially a three-hit wonder, they are probably more famous for being from Australia than their actual musical output. I have no idea really why this is except perhaps that whole “land down under” hit. They introduced “vegemite” and “chunder” to U.S. Top 40 AM Radio listeners. Colin Hay would go on to make a stellar cameo – performing a surreal acoustic version of this recipe theme – in one of my favorite Scrubs episodes. I feel if you are of a certain age today, you may never have been a big Men At Work fan but you still have a soft spot in your musical heart for their catchy pop hits.

When I started thinking about a pimento cheese recipe, my mind immediately went to “Boyz II Pimento” then Cherie suggested, “Pimento At Work”. Pimento cheese is an iconic Southern U.S. dish (even though it originated in NYC). Relative to Brooklyn, the Southen U.S. is the “land down under.” The choice for a title was obvious. While it may have been obvious to have gone with “Down Under” as the theme song, I chose “Overkill” not only because I believe it’s their best song, but it also connects with the overkill of bar food like loaded skins.

In all the years I cooked professionally, I never actually made loaded skins as a menu item. I can also say with certainty I’ve rarely ordered them. I mean, I love the concept of an edible carb-filled delivery method for cheese and bacon, but honestly, the prep time involved it really not worth the final, albeit delicious comfort food, result. It’s especially true in a commercial kitchen environment where you’re facing high volume prep and then finding a use for the scraped out potato meat. (That, by the way, tends to be some form of mashed potato side or possible potato dumpling.) As I never throw Superb Owl or Sportsball parties, I never really have a reason to go through the prep at home either. So why did this recipe happen? Well, I don’t really know. It had to do with seeing something on pandemic television binge-watching, starting an underground pimento cheese side hustle, and my lockdown quest to find new kitchen challenges.

The result? This was very satisfying in a “Now I need a nap & really won’t need these again soon” sort of way. The biggest pain about the prep is the time it takes to oven bake potatoes. Before you even say it, YES you can microwave “bake” a potato, but microwaves suck and that’s all I’ll say about that. Once you have the potatoes baked, this falls together fairly quickly. As I rarely have bacon in the house, I went with some fried seitan pieces which not only make this vegetarian friendly but also cuts down on the fattiness a bit. If you’re not into seitan, then use bacon or ham.

I kept things fairly traditional for the finish. You can’t go wrong with sour cream on a baked potato. Scallions add a nice hit of freshness. As I am pickle obsessed, I added a bit of red onion. They bring a sweet and sour element that ties the whole dish together. I might have hit these with a few shots of hot sauce after taking the photos, but that’s a “you do you” sort of thing.

This is one of those rare times where an Ugly Delicious dish and its song inspiration intersect a little too perfectly. These are about as pretty as any loaded potato ever gets and is truly the definition of appetizer/bar food overkill. Now that I’ve made a batch at home, I’m fairly certain I’ll be set for a few more years.

Bake the potatoes
Preheat the oven to 400°F.

Scrub the potatoes clean then bake the potatoes, pierce a few times with a sharp knife or the tines of a fork, rub with olive oil and bake on a baking sheet in the oven for about an hour until the potatoes are cooked through and give a little when pressed.

Making the skins
Remove the potatoes from the oven and let cool enough to handle. Cut in half horizontally. Use a spoon to carefully scoop out the insides, reserving the scooped potatoes for another use, leaving about 1/4 of an inch of potato on the skin.

Brush or rub olive oil all over the potato skins, outside and in. Sprinkle with salt. Place back on the baking sheet, cut side down, and cook for 10 minutes, then flip the skins over and cook for another 5 minutes. Remove from oven and let cool enough to handle.

Loading the skins
Arrange the potato skins skin-side down on the baking sheet. Sprinkle the insides with freshly ground black pepper, 1 tablespoon pimento cheese, and seitan, bacon, or ham. Return to the oven. Bake for an additional 2 minutes, or until the cheese is bubbly. Remove from the oven.

Use tongs to place skins on a serving plate. Add a dollop of sour cream to each skin, sprinkle with pickled red onion, and green onions. Serve immediately.