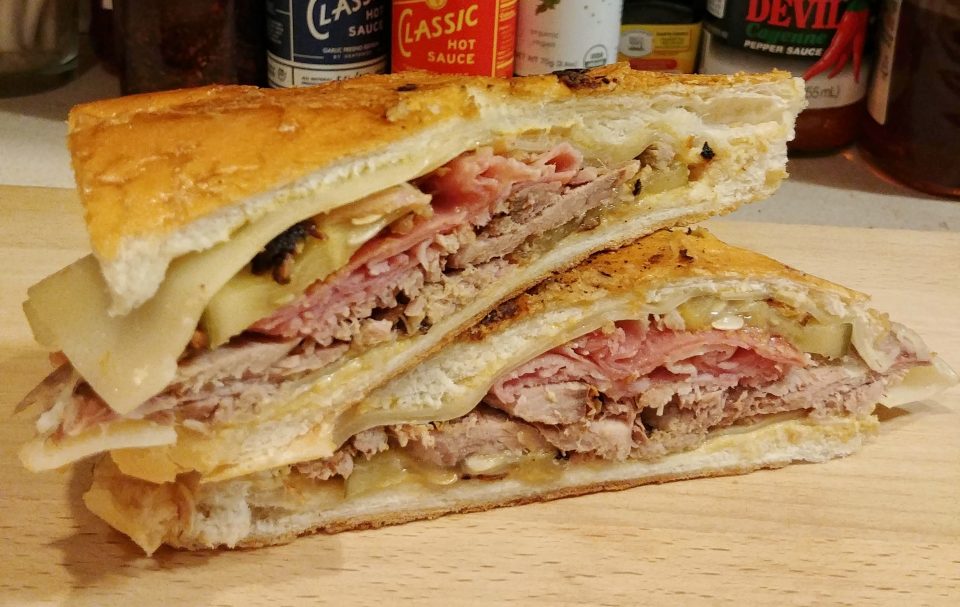 The lyric quote above is less about the sandwich and more about the author of this recipe.

There is nothing subtle about a White Zombie album. There are no power ballads. No love songs. No pop tunes. Rob Zombie doesn’t give a damn about hits or singles or radio play. Other industrial bands pretend to be metal *cough*Ministry*cough*, White Zombie bleeds metal. And not that worthless WTF are they singing Cookie Monster industrial metal. White Zombie is grindhouse horror sci-fi industrial metal without all the stupid stage props *cough*GWAR*cough*. White Zombie is sleazy B-movie Russ Meyer directed metal perfect for disturbing the neighbors while grilling to “Thunder Kiss ’65”. They are the soundtrack to a gloriously fucked up summer that ends with a four-state car chase and a bloody weed whacker in the trunk. The world needs more White Zombie.

I think I first encountered this music food pun as a special I saw somewhere. That combined a bratwurst style sausage with a Cuban sandwich treatment. Granted, it really had nothing to do with a traditional Cuban sandwich, but as both a White Zombie and sandwich fan, I tucked the pun away for a future recipe.

I’ve had an obsession with Cuban sandwiches since my first trip to Miami for Winter Music Fest. I was working as a webgeek for a dance label and was helping to produce a showcase concert for web streaming. My best friend at the time had been to Miami on numerous occasions and gave me the full culinary tour. One of my favorite joints was the amazing Puerto Sagua, a no-frills diner-style Cuban joint where I had my first Cuban sandwich. Its simplicity floored me, and when paired with a cafe Cubano, functioned as the perfect late-night recovery aid.

Returning to NYC from those trips, I went on a Cuban sandwich binge ordering them wherever I could. Most were just ok. Yes, I encountered a few brilliant true and traditional versions in NYC, but too often they just didn’t hit the mark. Mostly, they were overstuffed or overwrought creations more chef-driven or spectacle than the simple diner sandwich it’s meant to be. I was briefly blessed to have a great little Cuban joint just up the block from the BGC HQ, and they made an amazing Cuban (not to mention an espresso soda using a shot of Cuban coffee), but sadly they closed.

Over the years, I’ve also attempted to make Cuban sandwiches at home, often with those less than spectacular results I just mentioned. My first lesson was to not over stuff. This is a “less is more” sandwich. Think you need more meat? We’ll you don’t! Not enough cheese or pickles? Try it first. You’ll see it works perfectly. This is not designed to be one of those mega three meal sandwiches. For all the ingredients in it, you should actually end up with a fairly light meal.

My second lesson was there are actually two Cuban traditions. In Miami, it’s ham, roast pork, pickles, swiss, and mustard. However, Tampa decided to take it up a notch and throw some salami into the mix. While my first love will always be Miami traditional, I go with Team Tampa when making them at home.

My third and the biggest lesson was: you’re gonna need more butter. As I do not have a plancha or panini press, I need to toast my sandwich in a skillet. Many recipes will tell you to use two cast-iron or non-stick skillets. Heat both, place the sandwich in one, and use the other to press it down while grilling. What they often fail to tell you is you need a lot of butter on that sandwich to get it to a proper exterior. I mean A LOT! Some recommended putting the butter in the pan, but I found even on low heat the butter started browning and I never really got the kind of crunchy exterior I wanted. By spreading about 2 tablespoons of butter on each side of the sandwich, pre-heating both skillets, and essentially grilling the sandwich like a pressed grilled cheese, I finally hit the sweet spot I wanted. Some might want the cheese a bit meltier but I think it’s fine for this sandwich.

As I really don’t eat that much meat anymore, this is likely something I’ll pull out for BGC parties or if friends are over. All things considered, given the layers of meat and filling, this is actually a fairly light sandwich. Definitely filling, but not “I need to nap” filling. Contrary to most of the sandwiches I make, this needs neither a fork nor copious napkins. It’s the very definition of a “pick it up and eat with one hand while there’s a beer in the other hand” sandwich.

Lay bread, open side up, on a work surface and spread the bottom and top halves with mustard. Working only on the bottom half, layer on one slice of cheese, roast pork, ham, salami, pickles, then the other slice of cheese. Close the sandwich and press gently.

As an alternative, you could use a panini press. Just press the sandwich down a bit more before the butter, and then press it a bit more when cooking.