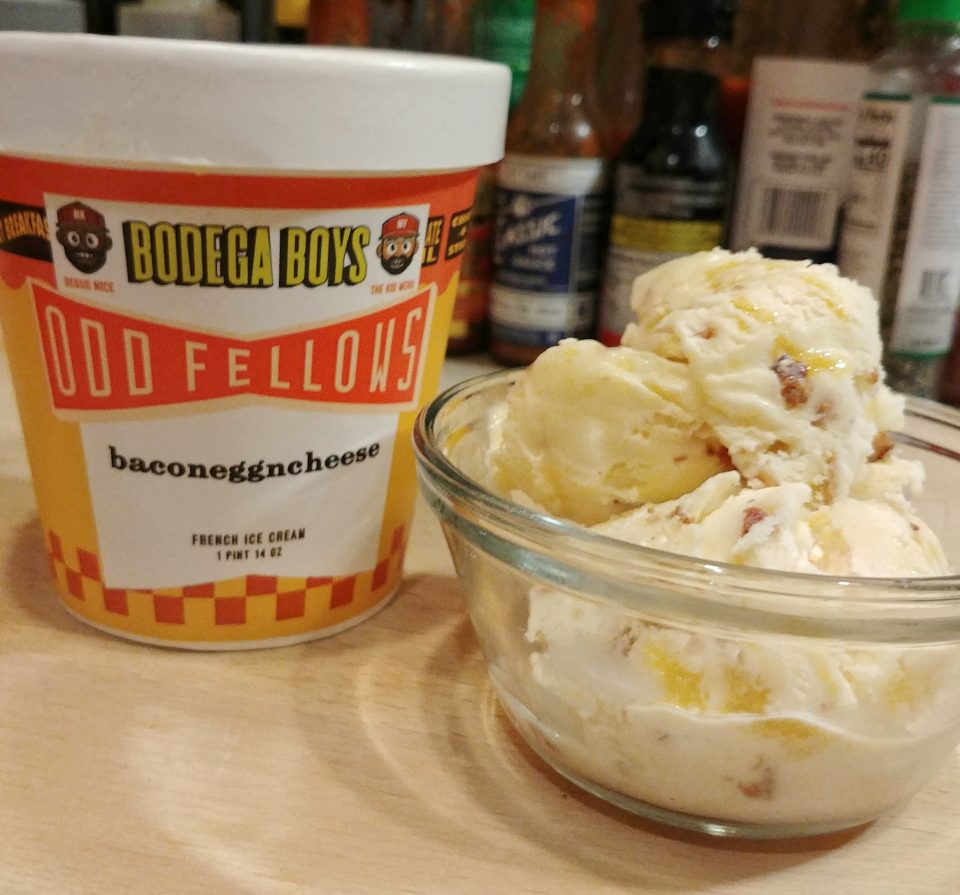 Pandemic 2020 meant budget tightening and a lot of home cooking. It also meant the occasional indulgence when the concept was too brilliant to ignore. So when I heard the always brilliant Desus and Mero had teamed up with Oddfellows Ice Cream to create a series of Bodega Boys-inspired ice creams, I knew they’d be taking some of my splurge cash.

Most of the collection, in my opinion, is pretty standard ice cream with some bodega candy counter mix-ins. Nothing too exciting. Until you hit the description for baconeggncheese: “A smoked cream ice cream with candied bacon, whipped cheese cream, and candied egg yolks.”

I am a major fan of the bacon, egg, and cheese or BEC. Oddly, I’ve never actually ordered one at a bodega opting instead to make mine at home. The magic of the BEC is the combination of salty smoky bacon with melty American cheese and (if you do it right) a runny fried egg. It’s a study in morning decadence on a bun and the perfect cure for any hangover. It’s so iconic that it even featured as a plot element in a certain DC Universe movie.

Given Oddfellows’ track record for making brilliantly bizarre flavor combos, I had high hopes for this ice cream. After all, this is the company that made a Cuban sandwich ice cream for the premiere of Chef. Their chorizo caramel is still one of my Top Ten Ice Creams With Meat. While I wasn’t completely disappointed, I also wasn’t completely floored.
This is a smoky bacon heavy flavor ice cream, and that’s a fricking brilliant thing. Unfortunately, the “fried egg” flavor is very light bordering on vague. Sadly, there are little to no cheese notes. I will concede this is a “creeper.” The more you eat, the closer to the culinary thesis it gets. Perhaps if I had eaten a full pint in one sitting I would have gotten the full effect. However, for a couple of scoops in a bowl, the taste was more like when you’re sitting next to someone on a bus or subway who is eating a BEC. So, essentially, a secondhand BEC.
Posted in bacon, breakfast, brinner, brunch, bushwick, cheese, dessert, food, ice cream, limited edition, mashup, put an egg on it, snack, snackinghere
Tagged bacon, bec, brooklyn, bushwick, cheese, desus, egg, ice cream, mero, oddfellows, snack, snackinghere