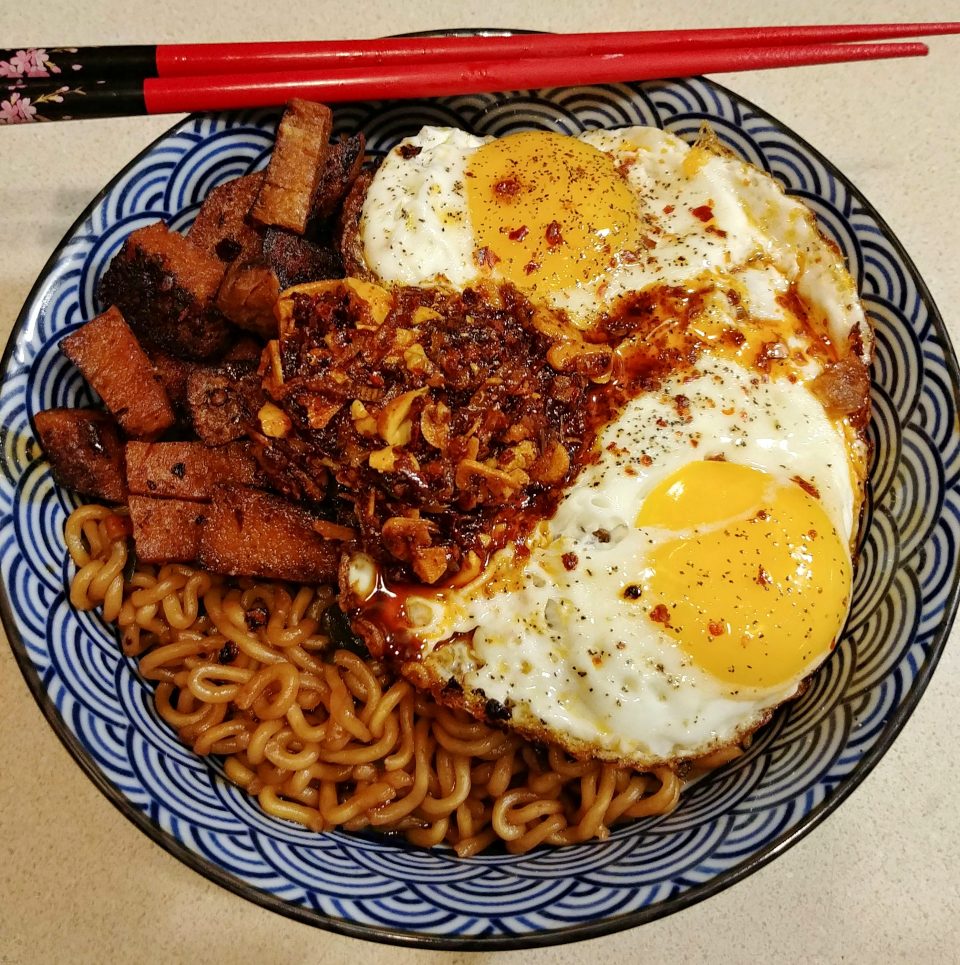 So having broken down and bought into the recent viral food trend of making jjapaguri (a.k.a. Ram-Don from the movie Parasite) and discovering it’s delicious, I decided I needed to make my own variation for the upcoming recipe hacks zine Ramyeon With The Devil. To be honest, everyday jjapaguri, combining instant Chapaghetti and instant Neoguri without any toppings, is basically heaven in a bowl. The underlying class struggle in Parasite led to the steak topping of the viral recipe. Perhaps my underlying culinary struggle with brunch items (and absolute disdain for the entire brunch concept) could be a launching point for my own jjapaguri variation.

Next, I wanted to add a meat component but never have the usual breakfast meat suspects (bacon, sausage, or ham) in the fridge. Lately, what I do usually have is some form of homemade seitan. As I’ve mentioned previously, if you are vegan or vegetarian or even just looking to reduce your meat consumption, you should be making your own seitan. No special equipment needed (though a food processor and steam basket help) and simple ingredients available at most any solid grocery. You can find my recipe for chorizo spiced seitan in my chili con seitan recipe. That seitan would work great here, but I had made a taco spiced seitan that I thought would work even better with jjapaguri. I’m including that recipe below. Yes, that means you’ll need to make some seitan before making brunch or you can be lazy, spend too much money, and buy some seitan at the store.

Finally, and this has less to do with brunch and more to do with my spicy addiction, top with a generous amount of spicy chili crisp. If you are not familiar, this is a Chinese condiment made with crispy shallots, garlic, ginger and soy nuts in chili oil. It’s not an oil, sauce, or paste, but more like a crunchy spicy umami bomb that takes everything up a notch. It also goes incredibly well with sunnyside up eggs. If you’re not down with making your own chili crisp, it’s retail version is made by Lao Gan Ma and easily found at Asian markets, specialty grocery, and online. If you’re not a major spice fan, and jjapaguri is already a bit spicy, you can skip the chili crisp and still have a fine meal.

Technically the jjapaguri recipe makes what could be considered two servings of noodles. As I’m looking at this as a hungover brunch item, one to battle the sins of the night before or lay a base for day drinking, I’m calling this a single serving recipe. Sure, you could split this with a friend or share it with a table, but I’m betting after the first taste you’ll want it all to yourself.

Cut the seitan into bite-size pieces and start boiling 4 cups of water in a medium-size pot or skillet.

Heat a separate pan with a tablespoon of olive oil. Add the seitan and cook until lightly charred. Remove from heat and set aside.

When water boils, add the noodles and the vegetable mixes from both packages and continue boiling for about 3 minutes. The noodles should be al dente at this point because they will be cooked again. Drain the noodles reserving the cooking water in a bowl.

Place the noodles back in the pot, and add a cup of the reserved noodle water. Add the entire packets Chapagetti base and sauce and Neoguri base. Stir the noodles well over medium heat until the sauce is evenly distributed and slightly thickens, about a minute. Turn the heat off.

Fry two eggs in your favorite style. I prefer oil fried sunnyside up eggs to get a crispy white texture and the saucy creaminess of the yolks.

Place the sauced noodles in a large bowl and top with the oil from the Chapaghetti package. Top with the seitan and fried eggs. Finish with a generous spoonful of chili crisp.

Combine everything except the seltzer and vital wheat gluten in the bowl of a food processor. Blend on low until smooth paste forms. Add the seltzer and vital wheat gluten to the bowl and process until it comes together as a dough ball and all ingredients are uniformly mixed into the dough. Turn the ball out on a work surface and knead for three minutes. Form the dough into a loaf and wrap tightly in aluminum foil.