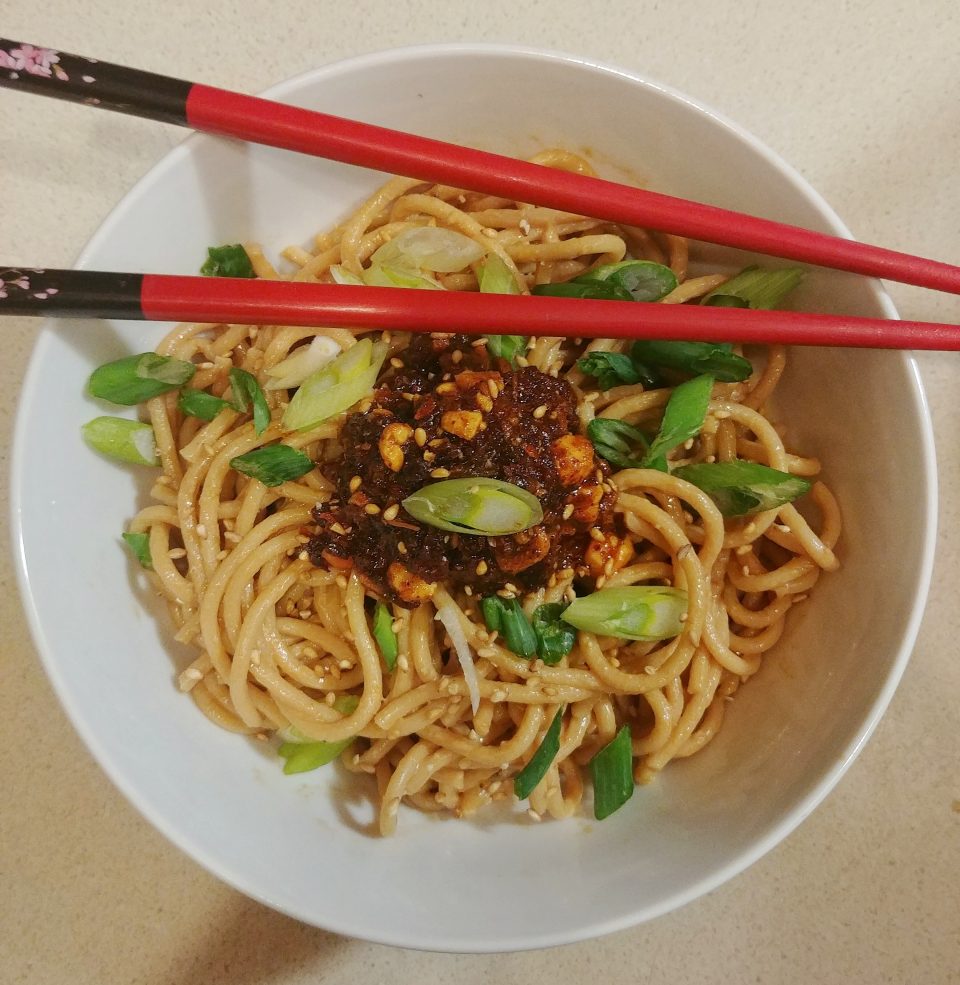 When it comes to Kool & The Gang, I’m more of a “Jungle Boogie” or “Hollywood Swinging” sort of fan. The theme song for this recipe is a bit too novelty for my tastes. I mean, come on, “I am the Genie Of Funk, everybody gets down!” REALLY!?! The lyrics are laughable to the point of parody but damn if it doesn’t have that solid Kool & The Gang funk bed. Despite being the title track for their eighth album, “Open Sesame” really didn’t see much success until its appearance on the Saturday Night Fever soundtrack.

The 40th anniversary of Saturday Night Fever found me back in disco heaven listening to one of the best soundtracks in the history of collecting a bunch of pop songs for a soundtrack. Suddenly, Track 11 started playing and a light bulb went on in my menu planning head:

Sure, the song is about the Ali Baba “Open Sesame” myth applied to disco dance floor love, but damn if it doesn’t make a catchy menu item name. Thus this dish, which I previously called “Cold Sesame Noodles,” was reborn with a disco spin.

This recipe is the pinnacle of “anyone can do it.” If you can boil water and run a blender, you can make a delicious meal in a few minutes (though it’s better resting overnight) that tastes better and is WAY cheaper than your local take-out joint. While there are a dozen types of pasta you could use for this, I’ve found regular everyday spaghetti works best. Stick with smooth peanut butter. It’s up to you how expensive you want to make this dish. From experience, I did not find any major taste improvement using fancy peanut butter or freshly made. I tend to use Skippy or JIF Natural which is a bit oilier. You actually want slightly oily butter to help with coating the noodles.

I prefer this cold, but my wife chooses to heat it up. Top with a little chili sauce or chili crisp, some scallions, and a sprinkle of toasted sesame seeds and you’re good to go. Craving a bit of protein? Add some seitan, tofu, or chicken to the bowl. Need a quick breakfast? Put a fried egg on it! However you top it, this recipe is The Fridge Genie granting your wish for a hefty amount of cheap fridge-ready meals!

Prepare noodles according to the package. Drain when done.

Place all of the sauce ingredients in a blender and process until smooth.

Place the pasta in a large bowl. Pour the peanut sauce over the noodles and toss to coat thoroughly. It will be very runny and will look like you made way too much sauce. Not to worry. Once it has rested in the refrigerator, the sauce will set up nicely.

Cover and refrigerate for at least one hour, even better overnight. Toss noodles again prior to serving. Top with your choice of toppings.