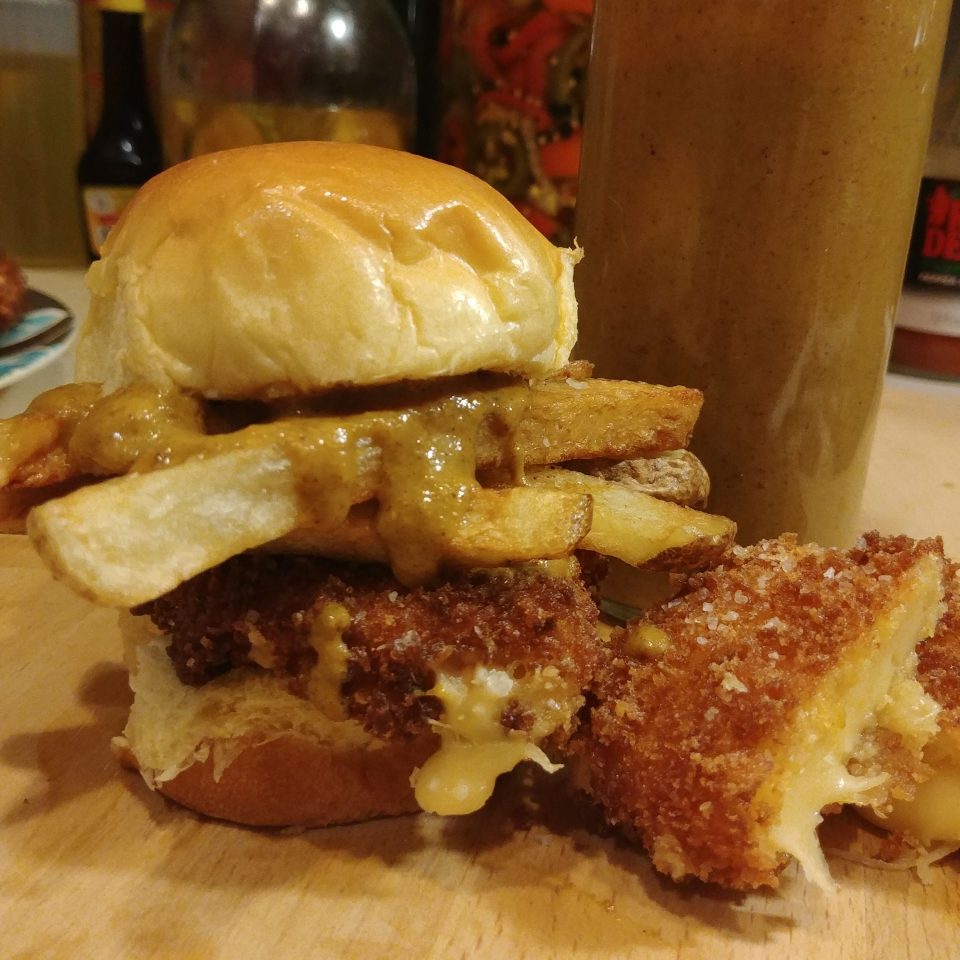 “Masquerading as a man with a reason. My charade is the event of the season.”

…and if I claim to be a wise man, it surely means that I don’t know.

I’m honestly not sure how many current music fans are aware of Kansas. Two albums and three singles are pretty much the extent of their career. Yet, those three singles are epic examples of ’70s art rock as predecessors to emo and should not be ignored for their historic significance.  For the sake of this recipe, however, I am only concerned with Kansas’ most epic and in my opinion best single “Carry On Wayward Son.”

I’m sure, like much of my ’70s music education, this came via Top 40 radio. I know I went to at least two Kansas concerts in high school (yeah – I know I’m old). Even when it was current, I recognized the absurdity of this track. Massive choral intro, “rock guitar for the masses”, soaring organ tracks, and that sort of FantasyCon style lyric that is standard in most art-rock. Even young music fan me knew this was cheesy as hell, but also recognized the genius of the hook. It’s an earwig and a brilliantly great one at that. Get over yourself if you’re too cool to embrace this song. It’s a lot pompous, definitely a bit dated, and hella fun!

This started as a radically different dish.

I originally thought of doing a sort of poutine or disco fries where British curry sauce subbed for gravy and I tossed in some mozzarella for the cheese. It was a solid plan that honestly did not come out as solid as I wanted. I had considered working and tweaking that concept to make something I dug, but my culinary heart wasn’t in it. I wanted a sandwich Something like a jacked-up Chip Butty with cheese.

I have a home kitchen philosophy: Make It A FryDay & Fry All The Things. I am not lucky enough to have a countertop fryer or air fryer. If I’m deep-frying, I’m going old school with a pot and a bunch of hot oil. As I spent years professionally cooking in kitchens with big fricking deep fryers, I hate home frying. So when I decide to deep fry at home, I go all in. As I was going to have to crank up a pot of oil to deep fry potatoes, I turned to the idea of fried cheese.

Strangely, this is a demented extension of the MF DOOM Fillet-O-Rapper sandwich. It’s a category I like to call “Full Meal Between Bread.” It’s pretty simple: take everything that would be on the plate and place it in a sandwich. It works remarkably well in 8 out of 10 cases and the remaining two can be easily tweaked. In this case, I wanted to take Disco Fries and turn them into a slider.

For those without a reference point for Disco Fries, it’s a genius New Jersey culinary invention consisting of french fries, gravy, and cheese. Most often eaten late-night post-clubbing (hence the “disco”), they are also a remarkable hangover cure or just a killer way to jack up a plate of fries. It’s the less fussy Jersey version of Canadian poutine and I am a devoted fan of the Fries of Disco. 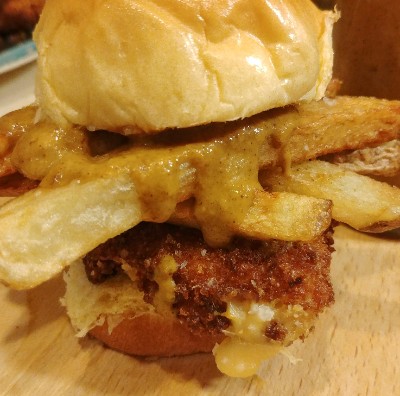 I just wanted them in sandwich form.

I also felt the need to push beyond the usual fries, gravy, cheese sauce formula. No, I am NOT an advocate of “elevated bar food” but sometimes it is possible to upgrade an idea without making it some cheffy douchebag version. I think this recipe succeeds brilliantly in keeping the essential “give me a fuck ton of grease” while also moving the idea of Disco Fries forward in both form and function.

(Yes, I need to be slapped for that last line.)

At the core of this recipe is the pun. “Curry On Wayward Spuds” could be nothing other than a typical British curry on chips. That’s fine. I’m just looking across the pond from Newark for the Disco Fries gravy. I went through a few iterations of the curry sauce. Most were a bit too thick or spicy or fussy. This is perhaps the easiest to make and stores well in the fridge. It also works well as a chicken finger dipping sauce.

As the plan here was a sandwich, I couldn’t go cheese sauce. My goal was to ONLY use the Disco Fries elements. Those that mirror the pun above and I did not want to introduce something like chicken or a burger. That led me to fried cheese. To be honest, this is actually part of another groan-worthy dish, Edam I Wish I Was Your Slider. I never considered fried cheese as a sandwich filling. Then Cherie (of We Can Tour That fame) suggested a fried cheese hot dog as a possible vegetarian recipe. And so this combination of fries, curry sauce, and fried Edam was born.

If I have one recommended variation, try using mozzarella for the fried cheese. I personally liked the nuttiness the Edam brought to this sandwich, but I think mozzarella would result in a more authentic Jersey diner experience. You want to eat this while the cheese is fairly warm and gooey, It’s not that it’s bad when the cheese cools, it’s just it’s INCREDIBLE when the cheese is melty.

CURRY ON WAYWARD SPUDS (THERE’LL BE CHEESE WHEN YOU ARE DONE)
Twice fried chips, curry sauce, & fried Edam cheese on a slider roll

Prepare the spice blend by mixing the curry powder, turmeric, cumin, ground coriander seeds, and cinnamon in a small bowl.

Heat the oil in a large skillet. Add the onion and saute for 4 minutes over medium heat. Add the diced apple and cook for another 2 minutes. Add the minced ginger and garlic and stir.

Add the spice blend to the onion mixture and stir constantly as it cooks for 2 more minutes. Add the flour and stir constantly as it cooks for 2 minutes. Scrape the bottom of the pan to prevent burning. Gradually add the chicken stock, stirring constantly to prevent lumps from forming. Add soy sauce, sugar, tomato puree, and combine thoroughly. Season with salt and pepper. Simmer 5-10 minutes until the sauce thickens.

Scrub the spuds well, then cut into 1/4″ thick batons. Dry thoroughly with paper towels and leave them sitting on paper towels to allow the surface of the potatoes to dry out for about 30 minutes. You can skip this step if you’re pressed for time, but your spuds won’t turn out as crisp.

Add 1 1/2″ of vegetable oil to a heavy-bottomed pot and heat to 330°F. Line 2 wire racks with 2 layers of paper towels each. Fry the spuds in batches until a light tan color and the edges are just starting to brown. Transfer the fried spuds to one prepared rack to drain.

When all of the spuds have been cooked, increase the heat of the oil to 375°F. Fry the spuds a second time until they are golden brown and crisp. Drain on a rack and sprinkle with salt.

Mix paprika and garlic powder into the flour.

Cut cheese into 1/2″ slices. Set up a breading station with separate bowls for flour, egg, and panko. This is a double breaded process. Coat the cheese in flour, then in egg, then in panko, then a second egg coating, and finally a second panko coat.

Fry in oil at 375°F and drain on a plate lined with paper towels. These are best eaten fairly hot for maximum cheese gooeyness.