Edam I Wish I Was Your Slider 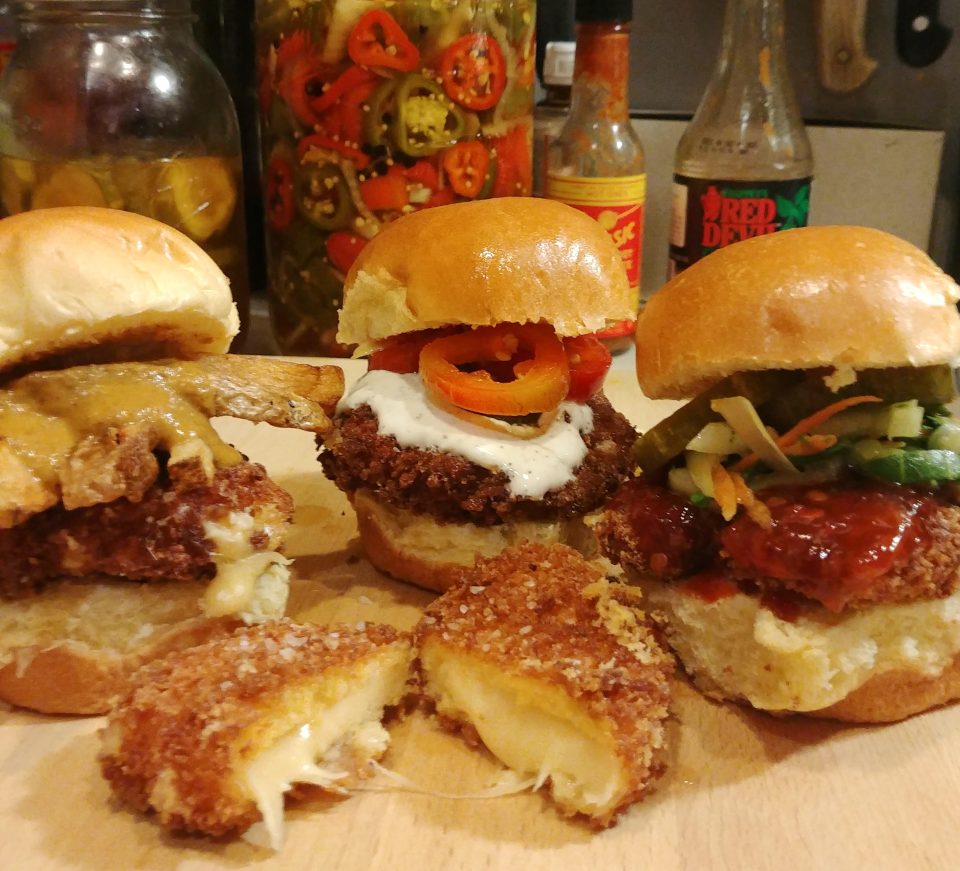 “I’ll rock you till the daylight comes, make sure you are smiling and warm.”

Theme song by Sophie B. Hawkins “Damn I Wish I Was Your Lover” from Tongues And Tails
Listen on Spotify
Listen on YouTube

I love one-hit wonders. Pretty much a staple of the music industry in the ’60s – ’90s, I fear music streaming may be the death knell for this remarkable musical genre. Yes, I believe “one-hit wonder” is in fact a top-level genre that then has the usual rock, country, r&b, etc. sub-genres.  Outside of a few specifically one-off novelty hits, most one-hit wonders actually believed they would have a string of hits and recorded full albums. It’s always kind of fascinated me that these acts would ultimately have to accept they had one hit and somehow move on. I know most of them had careers, possibly successful careers, but they will always be known for “that one song” and will be required to continuously perform it even once it’s decades old. I’m not saying that’s a bad thing, just that it’s fascinating to me one can make a career out of basically a single song.

Sophie B. Hawkins is one of those artists. While I’ll admit she apparently had a couple of other hits, does anyone really remember her for anything other than the theme song for this recipe? Yes, she played Lilith Fair but so did basically every major label female artist in the ’90s. Even so, I’d wager even those going to Lilith Fair for Hawkins were simply waiting for her to play “Damn I Wish I Was Your Lover” though, as pointed out in a not so great Season 4 Community episode, they may have on Team “As I Lay Me Down.” I remain firmly Team Damn and believe this is one of the ’90s best anthemic love songs.

It’s also been a title in my Music & Food To-Do list for ages. Originally, I had considered a burger but it seemed a bit too Bob’s Burger even though a quick Google search says they have not used it. Then I thought grilled cheese, but honestly, that was just too easy. Plus I have already used the perfect grilled cheese recipe music pun. It wasn’t until I started planning out Curry On Wayward Spuds, a Kansas-inspired curry disco fries recipe, that I stumbled on the idea of fried cheese sliders.

This is inspired by a Czech dish called Smažený sýr which is a breaded slice of Edam cheese served traditionally with tartar sauce or mayo and possibly a side of potatoes. It pretty much described the dish I was shooting for but swapping curry sauce for the tartar sauce or mayo. I had considered plating this traditionally, then suddenly thought of my days cooking bar food and realized this recipe needed to be sliders.

Honestly, I’m surprised I never did make fried cheese sliders when I was cooking professionally. In fact, I don’t think I’ve ever seen a fried cheese slider on any bar menu. Sure, I’ve seen fried cheese with dipping sauces. And fried cheese added to burgers or sandwiches. But fried cheese as the ACTUAL sandwich filling was somewhat a revelation to me. Perhaps I’ve lived a sheltered bar life (truth be told, I definitely haven’t) or maybe just haven’t hit the right bars. As someone who was constantly on the search of interesting vegetarian bar food that wasn’t a portobello mushroom, these would have been a great option.

They are also quite versatile. There are three recipes below, but I tested far more topping and combos. These were the ones I preferred (plus one is the reason for the recipe). Edam makes for a nice neutral cheese base for toppings, though I would bet a low-moisture mozzarella or string cheese would work. It’s important to not let these sit too long. Fried cheese, as you might guess, is best eaten while still hot and melty. As it cools, it strangely takes on a sort of fried chicken texture. Not dreadful, but not as great as when warm. 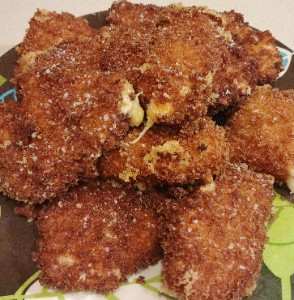 EDAM I WISH I WAS YOUR SLIDER
A guide to making deep-fried Edam cheese and then using it to make sliders.

Mix paprika and garlic powder into the flour.

Cut cheese into ½-inch slices. Set up a breading station with separate bowls for flour, egg, and panko. This is a double breaded process. To bread the cheese, coat in flour, coat in egg, coat in panko, a second egg coating, and finally a second panko coat.

Fry in oil at 375°F until golden and crisp, turning to cook evenly. Remove from oil and let drain on a paper towel-lined plate. Sprinkle with a bit of kosher salt.

Honestly, you could stop here. Just make some dipping sauces and eat a plate of fried cheese. If you want to feel like you’re actually making a meal, here are a few slider ideas that move this into the appetizer, bar snack, or meal territory. The key to any slider is a “Keep It Simple” approach. Those buns are tiny so you don’t get as much topping as a regular sandwich. The toppings you use need to hit some major flavor punches to make a great couple bite dish.

First up is the idea that started my descent into fried cheese slider madness. This is pretty much a carb bomb. It hits the right notes for disco fries on a bun, and it’s delicious, but was definitely the oddest of the three sliders tested. It was also messy as hell.

Scrub the spuds well, then cut into 1/4″ thick batons. Dry thoroughly with paper towels and leave them sitting on paper towels to allow the surface of the potatoes to dry out for about 30 minutes. You can skip this step if you’re pressed for time, but your spuds won’t turn out as crisp.

Add 1 1/2″ of vegetable oil to a heavy-bottomed pot and heat to 330°F. Line a 2 wire racks with 2 layers of paper towels each. Fry the spuds in batches until a light tan color and the edges are just starting to brown. Transfer the fried spuds to one prepared rack to drain.

When all of the spuds have been cooked, increase the heat of the oil to 375 degrees F. Fry the spuds a second time until they are golden brown and crisp. Drain on a rack and sprinkle with salt.

Curry Sauce
Makes about a pint

Prepare the spice blend by mixing the curry powder, turmeric, cumin, ground coriander seeds, and cinnamon in a small bowl.

Heat the oil in a large skillet. Add the onion and saute for 4 minutes over medium heat. Add the diced apple and cook for another 2 minutes. Add the minced ginger and garlic and stir.

Add the spice blend to the onion mixture and stir constantly as it cooks for 2 more minutes. Add the flour and stir constantly as it cooks for 2 minutes. Scrape the bottom of the pan to prevent burning. Gradually add the chicken stock, stirring constantly to prevent lumps from forming. Add soy sauce, sugar, tomato puree, and combine thoroughly. Season with salt and pepper. Bring the sauce to a boil, stirring constantly. Then reduce the heat to low and simmer the sauce for 12 minutes.

Turn the heat off, and allow the sauce to cool slightly before blending. When cool enough add the sauce to a blender or food processor and blitz until smooth. Add a bit of water when blending if you want a thinner consistency. Store in an airtight container in the fridge.

I then thought, “If I have melted cheese could I make a Nacho Slider?” The answer is sort of yes. This was OK but lacked any real punch. Maybe adding some refried beans to the mix might help. Not saying it’s not good, just not great.

Combine all ingredients in a bowl. Mix thoroughly and let rest 15 minutes before using it. Store leftovers in an airtight container in the fridge.

Finally, I fell back on my Hillbilly BBQ roots crossed with vaguely Asian flavors for a mash-up that worked nicely. In three toppings you get spicy, sweet, salty, crunchy, and umami all in a compact 3 bite sandwich. This was my winner for the test kitchen and one I’d gladly make again.

Spread a little sambal honey sauce on top and bottom of the slider bun. Place the fried cheese on the bottom bun, drizzle more sauce on the cheese, then top with a few pickles and some bok choy slaw.

Place all ingredients in a saucepan. Whisk to thoroughly combine. Place the pan over medium heat and bring to a boil. Reduce heat and simmer 10 minutes, stirring occasionally to keep from scorching. Let cool to room temperature before using. Store in an airtight container in the fridge.

Place the bok choy, carrot, and scallion in a medium bowl.

In a small bowl, place the rice wine vinegar, sesame oil, lime juice, Dijon, sugar, and salt. Whisk to combine thoroughly. Pour over the vegetables and toss to coat. Let rest at least 1/2 hour before serving.