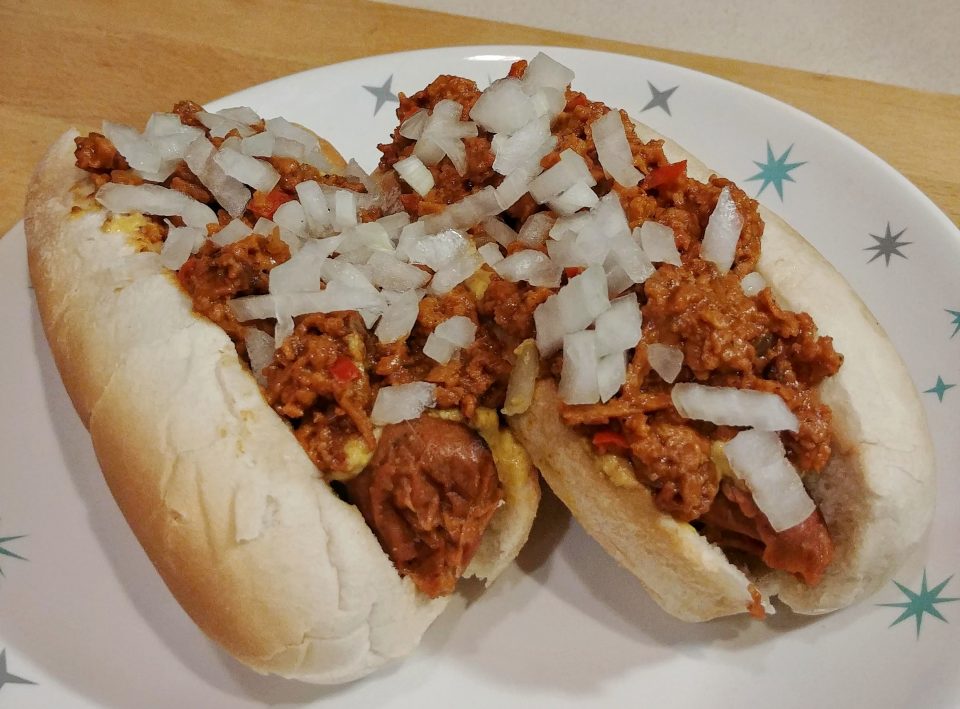 “Panic in Detroit, I asked for an autograph. He wanted to stay home, I wish someone would phone.”

I just realized, after two years of Music & Food recipes, this is my first David Bowie-themed recipe. That came as shock considering Bowie ranks in my Top 5 All-Time Favorite Artists. I can’t think of a reason why it has taken so long. After all, “We Can Be Gyros” is obvious. “Green Beanie” comes to mind. “Ziggy Starfruit & the Ciders From Mars” is certainly valid. (Yes, I realize I need to do an all Bowie issue now.)

I am more likely to listen to Thin White Duke or Berlin-era Bowie, but you cannot deny the groundbreaking genius of Ziggy Stardust Bowie. Sure, glam was already well established, but Ziggy took it to another level. More than just a series of concept albums, it was performance art on a Top 10 Radio Global Scale. Many have tried to replicate that kind of transformation and commitment to persona, but none have succeeded like Bowie did with Ziggy. (I’m looking at you, Marilyn Manson.)

While Ziggy Stardust and the Spiders From Mars is certainly the best and most consistent album from this era, there is a great deal of brilliance on both Aladdin Sane and Diamond Dogs. (On a side note, I’m not much of a Pin Ups fan.) So when I decided to write a recipe zine about cooking with seitan and included a recipe for a vegan Detroit Coney dog, I turned for the first time to Mr. Bowie for the obvious theme song.

See, much like Chicago Dogs, Detroit Coney Dogs are a sacred thing for anyone hailing from Detroit. They may seem like a simple chili dog, but that meat sauce is a very special Detroit (or Flint) specific recipe much like the neon green Chicago relish. Get it wrong, and you’ll be excoriated by the Coney Faithful.

Make it vegan and you’ll, well, cause panic in Detroit.

I’ve made my fair share of meat-based Detroit Coney sauce, but as part of a planned I Wanna Be Your Hot Dog pop-up, I wanted to see if I could make a seitan version. I had already been making seitan hot dogs, but the question was could I make a ground seitan Coney sauce that tasted like the meat version?

The answer is yes, after what was an initial misstep where I learned a valuable lesson about seitan vs. meat when using chili seasonings. Apparently, capsaicin reacts differently with the proteins in seitan than those in meat. Specifically, my first batch of seitan coney sauce reached a nuclear using my beef spice mix. I dialed back some of the quantities and hit the nail on the proverbial head. The same texture, heat,  and, remarkably, flavor as the meat version. I honestly didn’t think it would track that close to the original. While I’m doubtful any true hardcore Detroit Coney fan will think this works, for someone looking for a vegan dog that even omnivores will dig, I’d say this is a complete success.

Grill the seitan dogs using your favorite method. They are best on a charcoal grill, but also work nicely in a skillet with a bit of water. You want to get the sausages browned on all sides and heated through. (Yes, I know traditional Coneys are steamed but grilling works best for seitan sausage.)

While I know there are great debates about steaming or toasting hot dog buns, I tend to do neither. Just leave the buns near the stove to heat up a bit, but I’ve never really gone through the hassle of cooking the bun. Drizzle some yellow mustard into the bun, nestle a sausage into the mustard and bun, top with some of the coney sauce, and a sprinkle of white onion.

Turn the dough out onto a cutting board and knead with your hands for 2-3 minutes. Let the dough rest for 30 minutes covered with a clean towel.

Divide the seitan into 2 1/2-ounce chunks. Roll and press the seitan into a sausage shape. Roll each sausage in aluminum foil. Twist the ends so that the seitan is completely closed off. Add the seitan sausages into the steamer basket and let them steam for 50-55 minutes.

In a saucepan over medium heat, heat olive oil. Whisk in the flour to make a quick roux. Cook it, stirring frequently, until it smells nutty, about 3-4 minutes. Then whisk in the vegetable stock, tomato paste, vinegar, and hot sauce. Simmer it on low while assembling the seitan and vegetables.

Heat 2 tablespoons of olive oil in a skillet over medium heat. Add the onion, garlic, and red bell pepper and cook for 5 minutes. Push everything aside and add the spices and cook in contact with the bottom of the pan for 1 minute, stirring so the spices don’t stick to the bottom. Then mix in with the shredded seitan and cook until the seitan is lightly browned. Add the roux sauce and 1 cup of water and stir thoroughly. Cover and simmer for at least 15 minutes, but an hour is better.