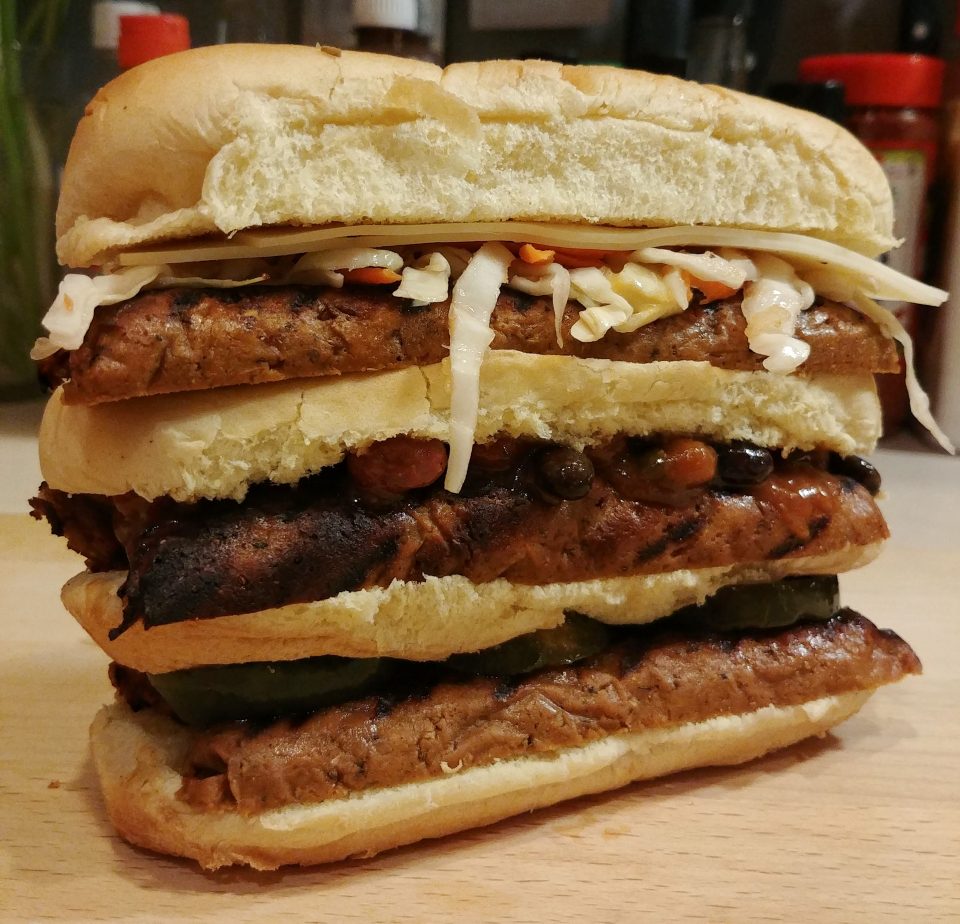 This ugly delicious monstrosity is what happens when one gets distracted during research for a new sandwich zine and ends up making a vintage recipe. 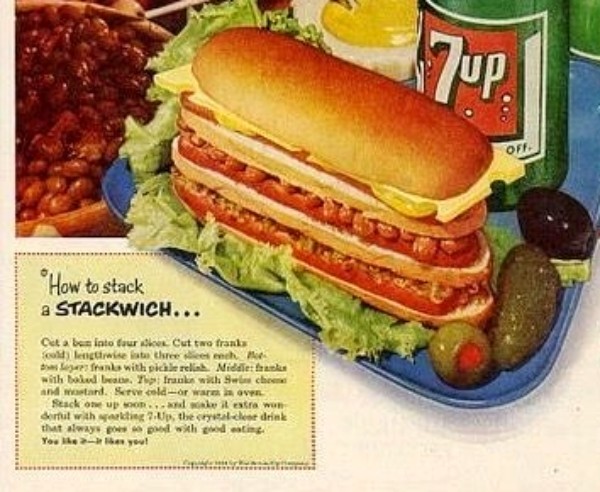 I was researching vintage sandwich ads and design to find a vibe for the Cheesed To Meat You zine when I came across this 7-UP ad. While it may seem odd to have a sandwich “recipe” in a soda ad, it seemed to be a thing in the ’50s and ’60s. I’m guessing the idea was pairing or serving suggestions, but honestly most (like this) are simply too bizarre to be taken seriously. Maybe it was the marketing department having a laugh.

For instance, this is ostensibly a layered hot dog “sandwich.” Yes, I know a hot dog IS a sandwich but this is a Hot Dog Sandwich Inception where the usual philosophical debate over “between sliced bread” is removed from the equation even as that bread is a bun. It’s almost as if some time traveling Mad Man from the ’50s/’60s anticipated the Great Hot Dog Schism and wanted to add a culinary Stonehenge to contemplate.

The “recipe” in the ad was less a set of instructions and more rambling ad copy. It first requires one to cut a hot dog bun into four slices. Go ahead and take a swing at that. I’ll wait. Yeah – it’s pretty fricking impossible. I chose to go with two buns and trim one for a middle slice.

Next, it suggests cutting two hot dogs into three lengthwise slices. Again, unless you have sushi master level knives and knife skills, you are better off cutting three dogs in half. From there, according to the original recipe, it’s pickle relish, baked beans, mustard, and cheese all layered and, for some reason, served cold or you can warm it in the oven. Serve with a sparkling 7-UP that always goes so good with “good eating.”

So, of course, I needed to know if there was truth in advertising and whether this was, in fact” “good eating”. The answer likely will not surprise you.

I’ll start by stating something that could be somewhat surprising: this is essentially vegan. I did not use vegan cheese (as no such thing exists) but the rest of the ingredients are vegan. I did not necessarily set out to create a vegan culinary bad decision. It just happened to be what I had in the fridge. Pandemic 2020 has me cooking with far less meat (mostly budget, but also health) and diving deeper into making seitan. As a result, the hot dogs ended up being leftovers from vegan hot dog research.

As for the toppings, I used the BBQ bean recipe from my Cha Cha Hut Cookbook. A mix of three beans, peppers, onions, & BBQ sauce, it’s worth picking up the cookbook for that dish alone. (Hint hint) Any great vegan or vegetarian baked bean recipe (even canned baked beans) will work. I also used the Hut’s Bread & Butter pickle recipe, but even some sliced dill pickles would work great. 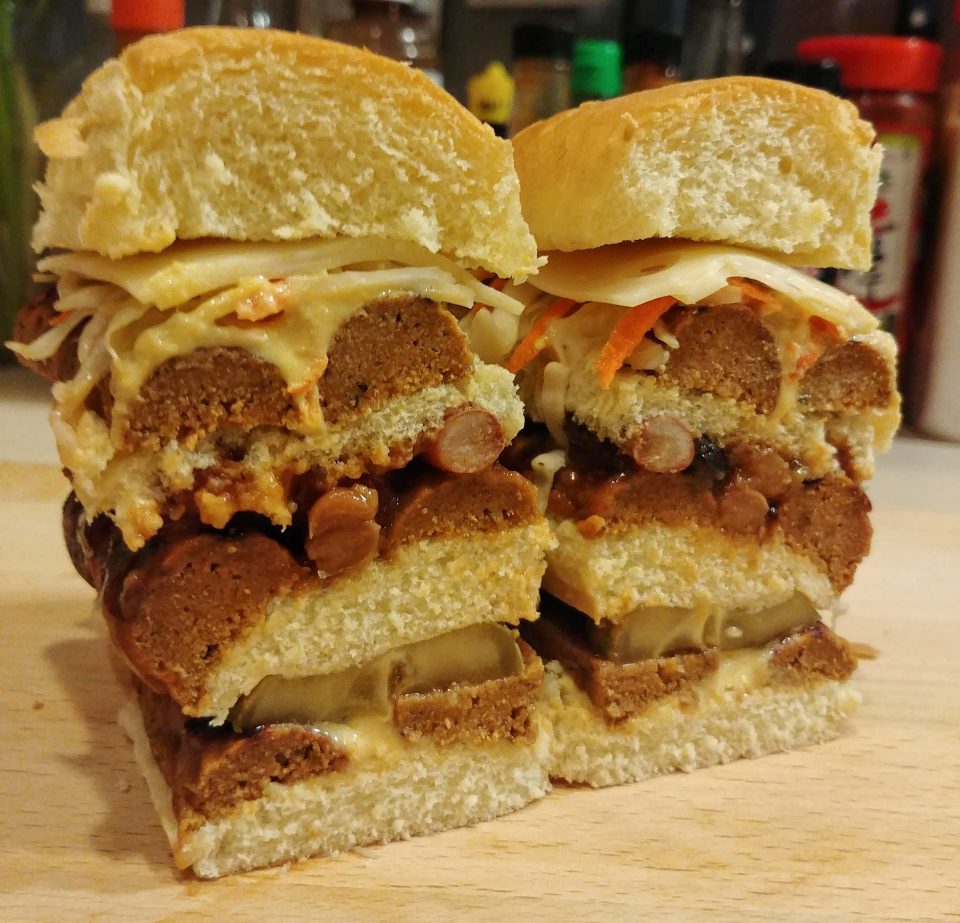 I use the pickle slaw recipe I almost always have in my fridge, and I include that recipe below. I know it may sound odd to put pickles or pickled jalapeno into a vinegar slaw, but trust me. It truly works. Plus this is one of the few slaws, even vinegar slaws, I find actually get better sitting a few days. the crunch remains and the pickle brine adds a lovely acid punch to the mix.

So, with all the toppings in place, it was time to assemble. I’ve never been a fan of “tall food.” “Epic food,” sure. I’ll admit I often overstuff a sandwich ultimately defeating the “eat with your hands” requirement. That’s quite a different issue than “tall” especially when the medium is a series of fairly narrow hot dog buns. I feel I did a solid job of controlling my usual urge to add too much topping, but by the top layer, it was getting sketchy from a structural standpoint.

As is obvious from both the intro photo and the cross-section photo, this is NOT a pretty Instagram worthy creation. It was also basically impossible to pick up and eat. I’m fairly sure I used a fork for about 70% of the process. I wanted this to be better as I truly do love the “meal in a sandwich” idea. This is, at its core, a cookout on a couple of buns. I’m sure there are those who’ll blame the vegan sausage subbing in for hot dogs. Perhaps, but VERY doubtful.

The original recipe says to “cut one bun into 4 slices” which I’m found that impossible. A better choice is using two buns and trimming two of the pieces for the center buns.

Slice the hot dogs lengthwise in half.

Good luck eating this monster. It’s messy and honestly, you will ultimately regret this foray into the ontology of sandwiches and it’s relation to the Hot Dog Schism.

Pickle Slaw
Makes about a quart

In a medium bowl, toss cabbage, carrot, and pickles together. In a small bowl, combine vinegar, pickle juice, sugar, garlic powder, salt, and pepper and whisk until thoroughly combined. Pour dressing slaw mix and toss to coat. Place in an airtight container and let rest in the refrigerator for at least an hour before using it.