I’m A Crepe With A Weiner 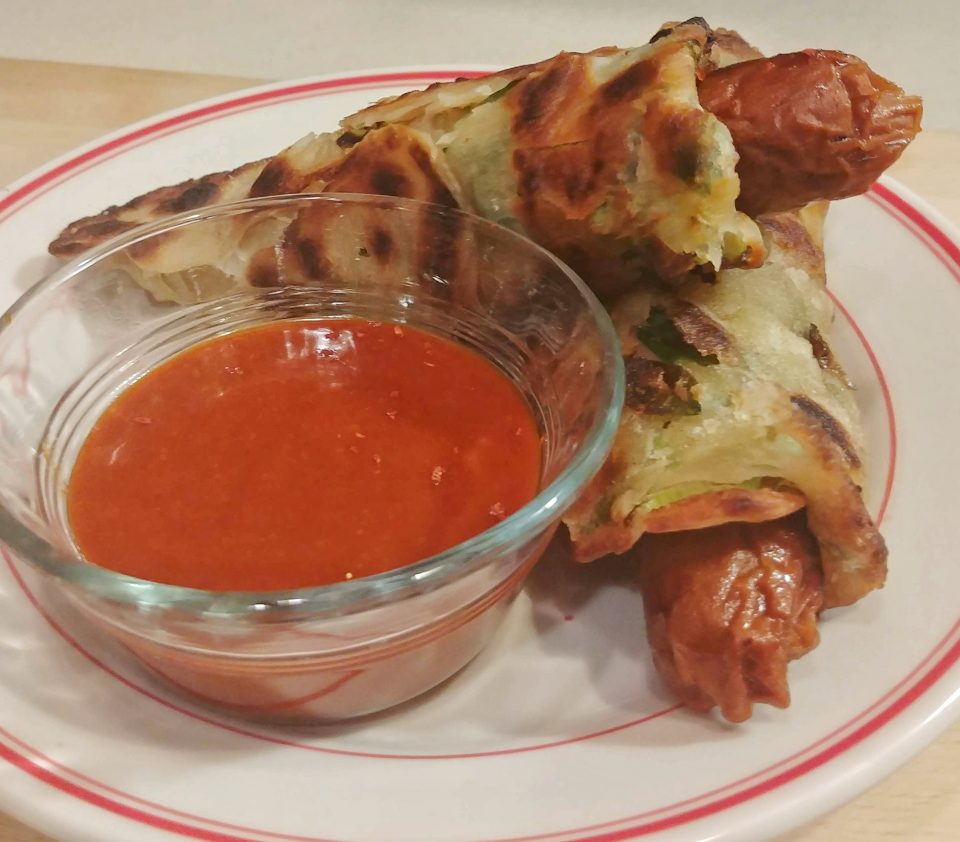 “You’re so fuckin’ special. I wish I was special.”

This is the second appearance of Radiohead in the Music & Food project. Call me a philistine, but I prefer the Pablo Honey Radiohead to the later art-computer-math-rock Radiohead. I don’t deny the genre-shattering work Radiohead has made since this debut, but let’s face it after this album & The Bends, Radiohead became a very different band. Just listen to this theme song. That hook – that rock god guitar – that angsty pathos any high school nerd can relate to. This song is the reason nerds form math rock & shoegaze bands. Thom York is speaking for a whole group of introverts and misanthropes who just want a place in this world. Or at the very least, a hot dog wrapped in a scallion pancake.

Technically the full name of this recipe is “I’m A Crepe With A Weiner (What’s That Sauce Doing There? It Just Belongs There.),” but that seemed like overkill.  I also acknowledge that a scallion pancake is technically not a crepe, but I don’t really care.

My Pandemic 2020 obsession was most certainly seitan in all its myriad variations. My biggest focus was on seitan dogs as I researched a sequel to my first hot dog zine. That’s led me through an array of flavors and styles with two coming out as clear winners. One is a standard hot dog style seitan dog used for Panic In Detroit. The other is the spicy gochujang dog used here. It’s still got a “hot dog-ness” to it, but with the added kick of gochujang spice. Kind of like if chorizo and a hot dog had a baby, but not really. Perfect for wrapping in a scallion pancake, dipping in a gochujang mustard sauce, and contemplating if Thom Yorke would consider you a creep.

Heat a cast-iron skillet or non-stick pan over medium heat. Add the vegetable oil and heat until it shimmers. Place the seitan dogs in the pan and cook, rotating occasionally, until lightly browned on all sides. Pour the water into the pan, reduce the heat to medium-low, and cover. Let the dogs steam for 1-2 minutes. When the dogs are done, wrap one dog in a pancake. Serve with the dipping sauce.

In a food processor, add everything except the vital wheat gluten. Blend on high until it’s smooth and saucy. Then add the vital wheat gluten. Blend again until it comes together in a ball and let the processor knead the dough ball for 1 minute. Turn the dough out onto a cutting board and knead with your hands for 2-3 minutes. Let rest on the counter, covered with a clean towel, for 20 minutes.

Divide the seitan into 2 1/2 to 3-ounce chunks. Roll and press the seitan into a sausage shape. Roll each sausage in aluminum foil. Twist the ends so that the seitan is completely closed off. Add the seitan sausages into the steamer basket and let them steam for 50-55 minutes.

Whisk flour and salt in a large bowl. Mix in sesame oil and boiling water with a wooden spoon until a shaggy dough forms. Turn out dough onto a lightly floured surface and knead, adding flour as needed to prevent sticking, until dough is smooth about 5 minutes. Cover with plastic wrap; let rest at room temperature for 1 hour.

Divide dough into 8 pieces. Working with one at a time, roll out on a lightly floured work surface as thin as possible (each should be approximately 10″ in diameter). Brush about 2 tsp. chicken fat on dough and top with about ¼ cup scallions; season with salt. Roll dough away from you (like a jelly roll) into a thin cylinder, then, starting at 1 end, wind roll onto itself to create a coil (like a cinnamon roll). Cover with plastic wrap and repeat with the remaining dough. Let rest at room temperature for 15 minutes.

Working with 1 coil at a time, roll out on a lightly floured surface to a 5″ round (keep other coils covered). Repeat with the remaining dough and stack as you go, separating with parchment or lightly greased foil brushed with vegetable oil.

Heat 1 tablespoon of vegetable oil in a medium skillet over medium-low. Working with one at a time, cook a pancake, turning frequently to prevent scallions from burning, until golden brown and crisp on both sides and cooked through, 8–10 minutes. Transfer pancakes to a wire rack and cool for about 5 minutes before cutting into wedges.

Whisk the ingredients in a small bowl until thoroughly combined.