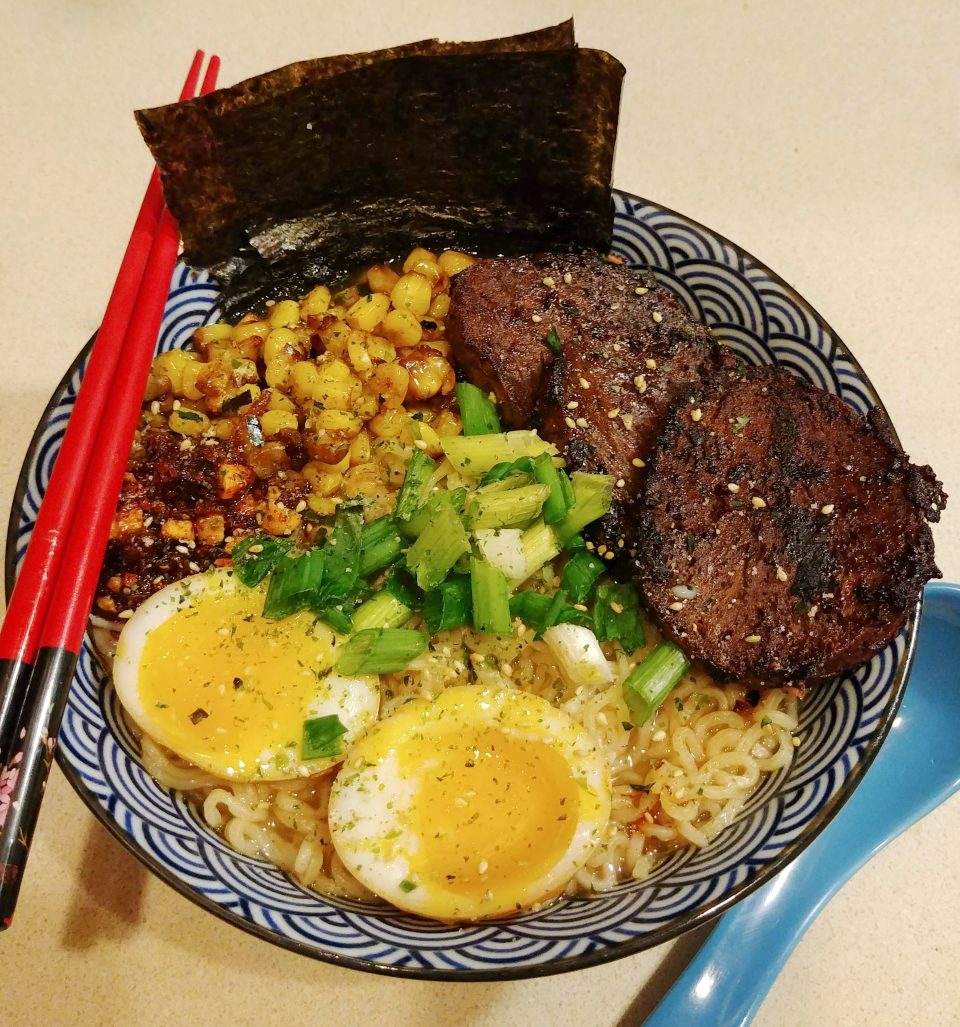 I stumbled into making ramen from scratch quite by accident. Back when I was still cooking professionally, I took a REALLY shitty gig at a HORRIBLE LES NYC joint that thankfully has gone out of business. The “chef” would bring in a different whole animal each week and feature it in a variety of dishes. One of those dishes was often some sort of ramen. Or at least, his VERY loose interpretation of ramen. I learned zero about actual broth creation or flavor layering or even bowl assembly, but it sparked an interest to continue exploring in my off-hours. Over the years, in other kitchens, I featured ramen as specials while researching recipes. Probably the oddest of my ramen experiments was a St. Patrick’s Day corned beef & cabbage ramen for an Irish sports bar. If I knew then what I know now, I definitely would have added some potatoes to the mix.

Over the years, from scratch ramen had been mostly a rarity at BGC HQ. It’s been one of those “Let’s have a treat and make something REALLY involved” sort of dishes. Most of my usual ramyeon experiments involve hacking packages of Korean instant noodles and upgrading them into recipes. I’m a big fan of hacking Korean ramyeon, but sometimes you just want to go all-in on prep. I find myself doing that more and more the deeper I get into ramen and ramyeon making. What was once an “every couple months” meal has become an “every couple of weeks” weekend project.

There are three essential components to ramen: the tare, the broth, and the noodles. I make my tare and broth from scratch but still rely on purchased noodles. I know one day I’ll get around to noodle making (it’s been on my list for years) but with the availability of great fresh ramen noodles in NYC, I don’t have a massive reason other than the skill itself. If I can’t make it out to an Asian market for fresh noodles, I find a couple of store-bought packs of instant noodles work quite nicely. Just keep those seasoning packs for making popcorn.

For me, making ramen broth was a fairly easy learning curve. I’d been making broths for as long as I had been cooking, especially in commercial kitchens. Saving vegetable scraps, meat trimming, and bones then simmering for soup and chili bases is Food Cost Reduction 101. Over the years, I’ve come to understand the difference between standard soup stock and a really great ramen broth. Both require time and flavor balance, but as there is little other than the tare flavoring ramen broth it’s vital to have it pack a punch and be clean as hell. I’ve taken ‘meh” stocks and turned them into pretty great soups. I’ve never had a great bowl of ramen made with “meh” broth.

For tonkotsu broth, which uses pork bones, research revealed an interesting step I had never done previously. Usually, I just take all of my broth ingredients, toss them in a pot, add water, bring to boil, then simmer for hours. If, however, you want a clean clear broth, I learned you need to pre-boil the bones, for lack of better words, to de-scum them. Place the bones in your stockpot, cover with water, bring to a boil, let boil for 10 minutes (the water will get very scummy), then rinse the bones under cold water. This recipe was the first time I used this method, and the results were spectacular.

Then there’s the tare. This seasoning is usually soy or miso placed in the bottom of the ramen bowl before the broth is ladled in. It’s what adds saltiness and umami to the dish and is usually a closely guarded secret among ramen cooks. When I was first making ramen at that shitty LES joint, the “chef” thought he was making “Shoyu Ramen” or soy sauce ramen. For him, that meant putting some soy sauce in the bowl before cooking noodles in a half-assed broth and dumping into the bowl. Thankfully, my ensuing years of research have taught me better.

First, do NOT cook your noodles in the broth. This will kill your broth with the released noodle starch. Second, make your tare something more than just dumping soy sauce in the bowl. This is your secret sauce. Your chance to make this bowl of ramen your bowl of ramen. Do you want to go with Shoyu-style ramen? Then get a little spendy on an excellent bottle of soy sauce and punch it up with dried fish, mushrooms, and kombu. I’m a miso ramen fan preferring the creamy saltiness of a seasoned miso paste. For this recipe, I went with some Korean inspired flavoring to add a bit of spice to the finished bowl.

Finally, there are the toppings. I tend to believe ramen is a bit of a blank canvas and there are no “wrong” toppings. I do believe in less is more. Keep it simple: a protein, a vegetable, scallions, nori, and a soft-boiled egg. Then perhaps a sprinkling of furikake, some chili crisp or chili oil, and maybe a bit of garlic. I’ve made the mistake of overloading on the topping and the results always disappoint.

I know some might find the addition of corn to be odd, but trust me it works beautifully. And yes, this is pork ramen with bbq seitan. That’s due to a couple of factors. One, this was made during Quarantine 2020, and pork was wicked expensive. (I had the pork bone was a frozen leftover.) And two, I prefer making seitan for my ramen and ramyeon. It allows me to set a flavor profile and it’s wicked cheap. This seitan was made with a coffee chocolate cinnamon seasoning that gave it a sort of pork sausage flavor. After the marinade and pan-frying, it took on a beautiful flavor and texture. If you haven’t explored seitan, I highly recommend picking up my recipe zine Would You Make Me Seitan.

Cook the noodles in boiling water until al dente, about 3-5 minutes depending on your noodle.

To assemble each bowl, place 1 tablespoon of the miso tare at the bottom of the bowl. Ladle in half of the broth and use chopsticks to stir the tare into the broth. Place half of the noodles in the broth. Top with half of the corn, three pieces of seitan, and an egg cut in half. Finish with a sprinkling of scallions.

Repeat for the other bowl.

Place the pork in a large stockpot. Cover with water and bring to a boil. Boil for 10 minutes until the water gets, well, scummy. Remove the bone and rinse under cold water. Pour the boiling water out and rinse the pot.

Place the rinsed pork bone, vegetable trimming, star anise, and white peppercorns in the pot. Cover completely with water. Place on the stove and bring to a boil. Reduce heat and maintain a moderate simmer for 8-12 hours, stirring occasionally.

Combine all marinade ingredients an a bowl and mix well. Place seitan in a ziplock bag and pour the marinade over the seitan in the bag and toss to coat. Let rest in the fridge for at least 6 hours and up to 24 hours.

Place the mirin, soy, rice wine vinegar, brown sugar, garlic, and ginger in a saucepan. Gently heat until sugar dissolves. Remove from heat and stir in miso, gochujang, and sesame oil. Let cool and rest at least 1 hour (overnight preferred) before using it.

Submerge the eggs in really cold or ice water to chill. This stops the egg yolks from continuing to set up. Peel and set aside.

While eggs are cooking, combine all marinade ingredients. Place peeled eggs in a container & pour marinade over them. Let soak at least one day.

Heat oil in a deep non-stick skillet over medium heat. Add corn and cook until defrosted. Add soy sauce and sesame oil until the corn is cooked through and lightly browned. Remove the corn and set aside.