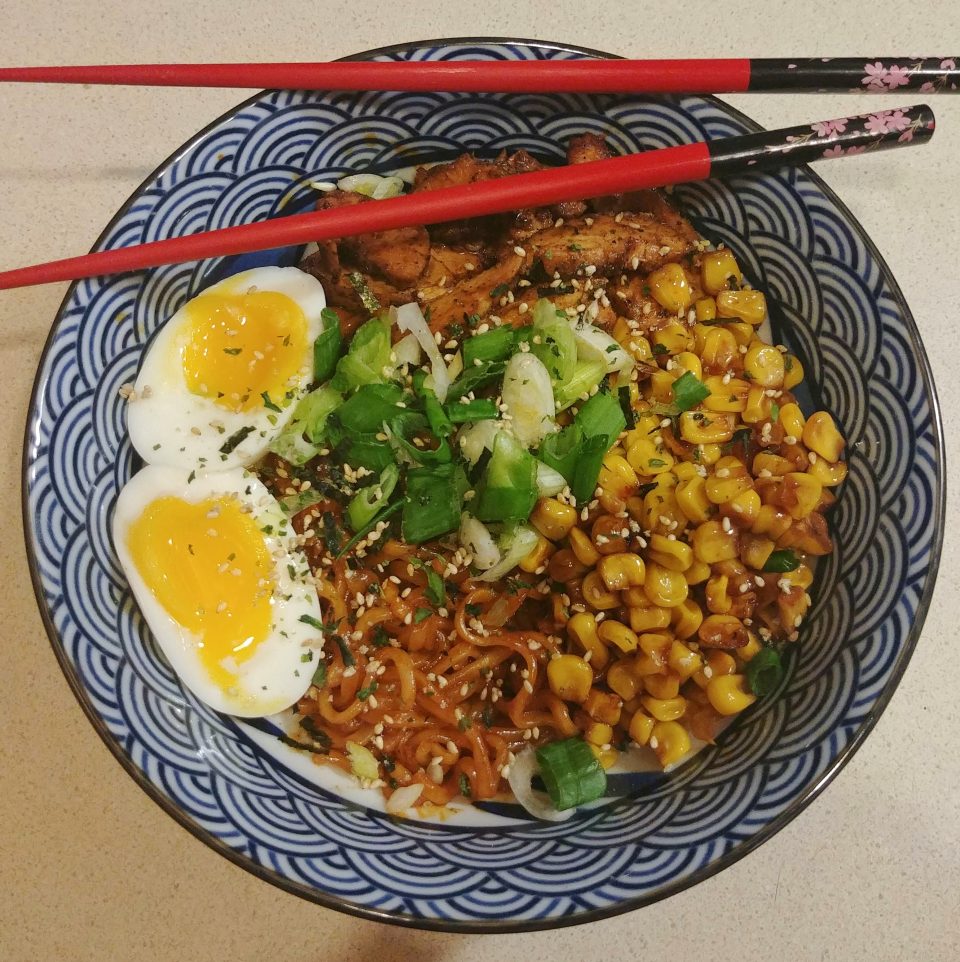 Long before the 2020 COVID panic drove people to the supermarket to panic buy ramen packs, I started a project on Japanese instant ramen’s Korean cousin: ramyeon. What sets Korean instant noodles apart from Japanese, in my opinion, is spiciness and depth of flavor. The noodles are generally better quality and the overall dishes, even without any hacks or additions, are far superior (at least for brands available in the U.S.) Adding to my preference for Korean instant noodles is their adaptability. One can easily make a simple cheap filling dish by following the instructions but hit the internet or noodle-head Reddits and you’ll find a treasure trove of ramyeon variations. Most tend to ditch the broth for a sauced noodle experience even combining two different ramyeon to create an internet-famous (and cinematic famous) dish. I’ve even chimed in with my own jjapaguri brunch variation on the theme.

Not being able to access the incredible array of Asian markets in NYC, I pivoted to whatever I could find at my local grocers in Bushwick. I had, form time to time, found a few Nongshim packages in the stores. Mostly Nongshim Black which is one of my faves. What surprised me, though, was finding Chapaghetti and Neoguri which I had never seen before. Granted, these are the instant noodles needed for the Parasite movie ram-don dish, but I was still very interesting to see solid stocks of a Korean noodle in a Latin neighborhood that had not been there a month ago. Additionally, other stores were stocking “deep cut” ramyeon (usually at $3 a pack) next to the usual crap Top Ramen and Maruchan bricks. (To be clear, I think ALL Japanese instant noodles suck but I am open to someone convincing me otherwise.)

During a recent errand run, Cherie (of We Can Tour That fame) found a local bodega just getting a fresh delivery of ramyeon. In addition to the usual Chapaghetti, Neoguri, and Shin Black suspects, she also found some Rare For Bushwick Samyang offerings. One was the surprising Samyang Jjajang Hot Chicken Ramyeon. I’ve never seen this in Bushwick prior to the lockdown. It’s an instant riff on spicy black bean sauce noodles (similar to Chapaghetti) but with a “chicken flavor.” That’s in quotes because very few of these instant dishes have an actual meat flavor. To be fair, Neoguri, described as a spicy seafood noodle, definitely has some seafood notes. However, I have yet to find a “chicken flavor” that had anything close to actual poultry notes.

Then there’s Samyang’s Mala Hot Chicken ramyeon. I find this on a sporadic basis at my local grocery. Theoretically, mala is an oily, spicy, numbing pepper often used in a style of hot pot cooking. This is supposed to be one of the hottest ramyeon available, but I didn’t find it much hotter than most Korean instant noodles.

Which leads me to the final pack, and the base for this recipe, the Samyang Curry Hot Chicken flavor. I have previously had this without any additions, and as with any ramyeon claiming a “meat” flavor, there’s is no chicken or really even chicken flavor. One interesting side note, there are a series of kimchi ramyeon that include packs of kimchi. Not enough in my opinion, but at least these are kind of living up to their flavor name.

Hitting the fridge to see what I could toss in for this hack, I settled on some leftover roasted chicken breast and recently bought frozen corn. The chicken was an obvious choice. What better way to add ACTUAL chicken flavor than using some leftover ACTUAL chicken. To mirror the curry spice on the noodles, I decided to reheat the chicken with a Sriracha mirin glaze. 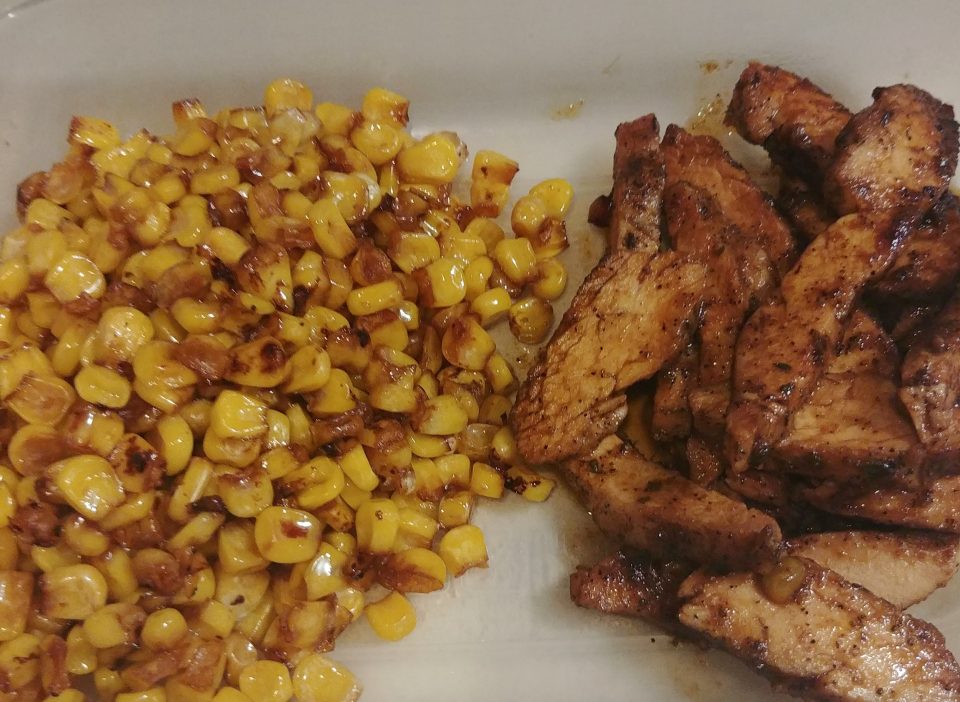 Then there’s the corn. I’ll admit, the first time I saw corn being added to ramen I thought “Ummm, no.” But I am now a solid convert. For this hack, I fried the corn in a bit of sesame oil and soy sauce to get a nice caramelization and punch up the flavor profile. I made both the chicken and corn while my 7-minute egg was boiling and cooling.

About that egg. I usually prefer a 6 1/2 minute egg for a more jammy experience, but I also usually marinate them for a few hours. This was a somewhat spur of the moment “Hey I want ramyeon” cook so I went with a slightly longer cook on the egg. Just a choice made for this particular bowl, but certainly, a jammier egg would be great here.

The final piece to this hack is the noodle preparation. This is designed to be noodles in a curry broth. As I am currently obsessed with sauced ramyeon (again, thanks jjapaguri), I went with my usual broth-into-sauce method. This entails boiling the noodles with the dried vegetable pack in the recommended amount of water but without the seasoning packet. Once the noodles are cooked, they are strained with a fine-mesh strainer, reserving the cooking water. Return the noodles and re-hydrated vegetables to the pan, add a cup of the noodle water, the seasoning packet, and toss to combine. Simmer on low for a minute or two until the sauce thickens and coats the noodles. This results in spicier, richer (some say saltier) umami bomb noodles and is my preferred method for making these instant packages.

Bring a pot of water to a boil. Gently lower the 2 eggs into the water with a slotted spoon. Reduce the heat to a simmer and cook the eggs for 7 minutes. Remove the eggs from the pot and immediately place them in a bowl of ice water. Set them aside in the ice water while you cook the rest of the dish.

Heat oil in a deep non-stick skillet over medium heat. Add corn and cook until defrosted. Add soy sauce and sesame oil until the corn is cooked through and lightly browned. Remove the corn and set aside but do not clean out the pan.

Place the skillet back on the heat and deglaze with the rice wine vinegar. Add the chicken, mirin, and Siriacha and cook until the chicken is heated through and glazed. Remove the chicken from the skillet and set aside but do not clean the pan.

Add the chicken stock to the skillet and raise the heat to high. Bring the stock to a boil then add the two noodle bricks and both dried vegetable packages. Cook 5 minutes stirring occasionally to loosen the noodles.

When the noodles are cooked, drain them with a fine-mesh strainer over a bowl, reserving the cooking broth. Return the noodles to the skillet. Add 1 cup of the reserved broth and both sauce packets. Stir to combine and cook 1-2 minutes until the sauce thickens and glazes the noodles.

Divide the noodles between two bowls. Top each bowl of noodles with half of the chicken and half of the corn. Peel the eggs and cut in half placing one egg in each bowl. Finish with a sprinkling of scallion.