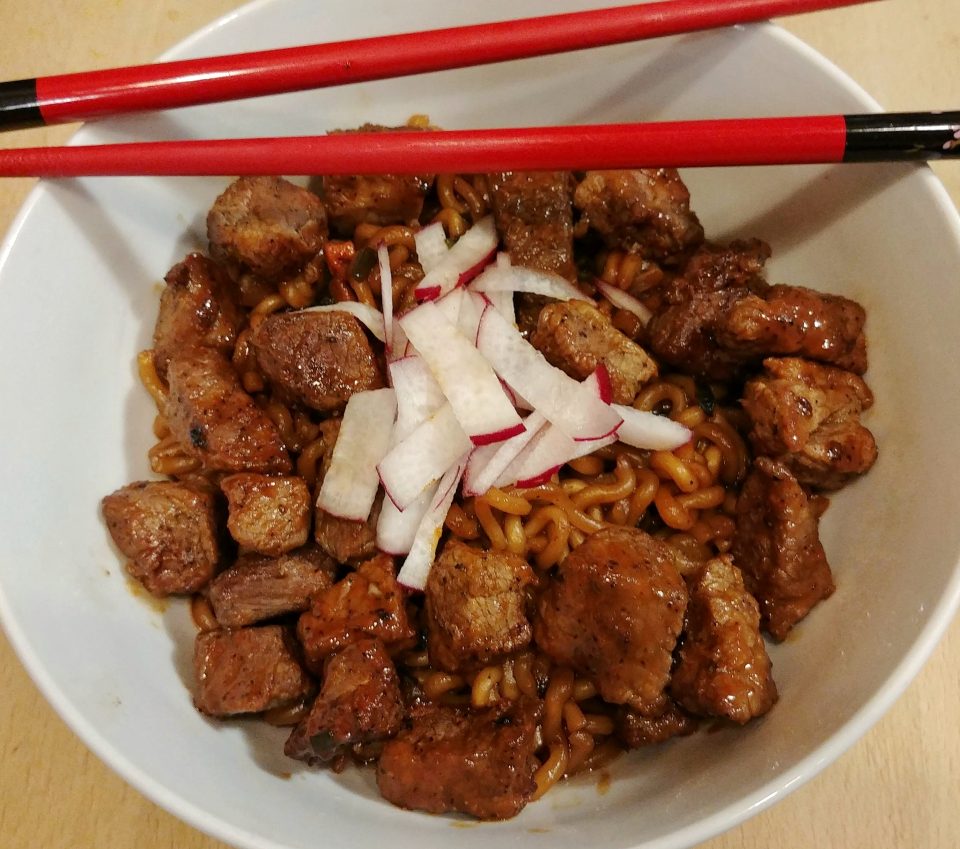 I’m not a big fan of viral food. Even as I use Instagram and Reddit to spread the BGC Gospel, I have an issue with the idea of a dish being “Instagrammable” or some of the honestly disgusting FrankenFood creations. These creations often feel like they are only made for clicks or the algorithm or monetization or any of those other buzzwords web creators use to justify their existence. To me, cooking “viral trending food” is simply pointless and honestly fairly unimaginative.

Unless, of course, that trending food is using my current culinary obsession and the topic of an upcoming BGC zine: Korean instant ramyeon noodles. Then I really have no choice but to jump on the trend.

Full disclosure, I have not seen Parasite though it is in my “to watch” list. Honestly, my film nerd days of reading subtitles for 2 hours are a bit behind me, but what I know of the story and a few of the clips I’ve seen really have me intrigued. I’ll likely get around to it, but the point here is I did not before making this dish. (On a side note, I actually did see the scene with this dish AFTER making it, but it wouldn’t have made a difference in the process.)

While this dish has shown up on the web under the name “ram-don,” it is an actual Korean dish known as jjapaguri or chapaguri. It combines the spicy black bean sauced Chapaghetti instant noodles with the spicy seafood Neoguri instant noodles. Chapaghetti is instant ramyeon. Neoguri is instant udon. As the dish’s actual name “jjapaguri” or “chapaguri” had no English translation, the subtitle combined the RAM from ramyeon with the DON from udon to make “Ram-don.” (Trivia note: apparently Neoguri is Bong Joon Ho’s favorite instant noodle. Just in case that comes up at the next bar trivia.)

As I understand it, in the film the meat is Hanwoo beef. I’m not that bougie or well-funded so I went with a cheaper London broil cut that was on sale. It took a bit longer to cook, but still worked in the grand scheme of upgrading cheap instant noodles with steak. In the movie, the entire dish is apparently cooked in 7 minutes, but I can attest to the fact that it’s impossible even if you pre-boil the water before starting the timer. Regardless, this cheap two-serving meal still comes together in less than 15 minutes and is incredibly filling. 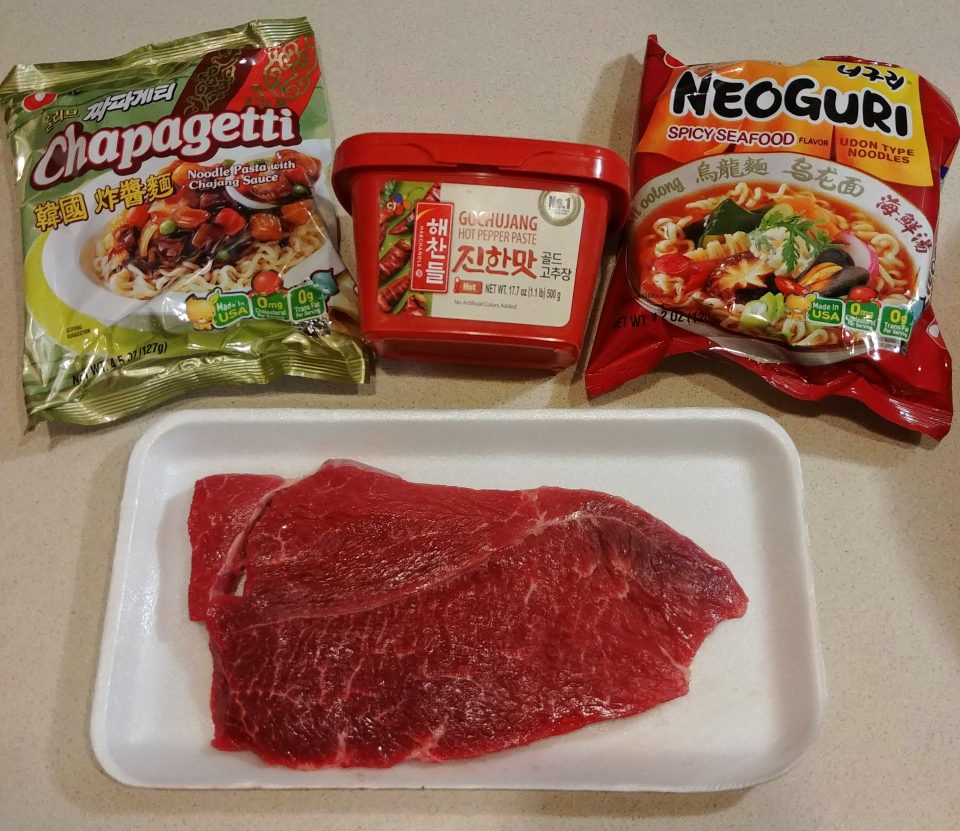 The photo above is precisely every ingredient for this dish. True jjapaguri skips the beef and gochujang opting for only the noodles and their seasoning packets. I used the gochujang to glaze the steak and add a bit more kick to the dish.

Technically, this could be a one-pan meal. You could cook the steak, wipe out the skillet, add the water, cook the noodles, and toss the steak back in to heat through. I chose to dirty two pans for this. While I was sauteing the steak, I was bringing the water to a boil in a deep wok style non-stick skillet. You can certainly use a regular pot, but a skillet will make it easier when it comes down to the final frying of the noodles.

I’ve seen a few versions that recommend using only a portion of the Neoguri soup base in the final noodle cook. I chose to go full-on as that appears to be the traditional Korean method. It makes for a damn spicy bowl of noodles and that’s perfectly fine with me. Most amazing is one would think combining two packages of instant noodles and their full seasoning packs would result in a salt bomb. Nothing is farther from the truth and the real brilliance of Korean instant noodles. Unlike their Japanese counterparts, these are true instant culinary gems with well-balanced flavors, a solid kick of heat, and incredibly filling. They are my new obsession and the topic of my upcoming Ramyeon With The Devil recipe hack zine.

Now that I’ve joined the masses in making the viral recipe, I realize I need to come up with my own variation for my zine. My choice was to make Seitan Jjapaguri Brunch. 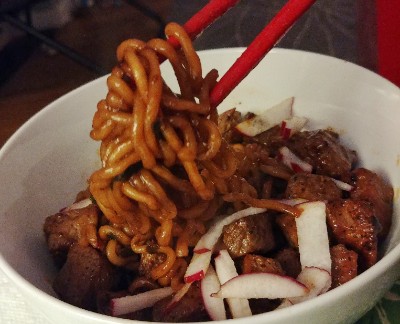 Cut the beef into bite-size pieces and generously sprinkle with salt and pepper and start boiling 4 cups of water in a medium-size pot or skillet.

Heat a pan with a tablespoon of olive oil. Add the meat and cook all sides to the desired doneness. Add the teaspoon of gochujang and toss to glaze the beef. Remove from heat and set aside.

When water boils, add the noodles and the vegetable mixes from both packages and continue boiling for about 3 minutes. The noodles should be al dente at this point because they will be cooked again. Drain the noodles reserving the cooking water in a bowl.

Place the noodles back in the pot, and add a cup of the reserved noodle water. Add the entire packets Chapagetti base and sauce and Neoguri base. Stir the noodles well over medium heat until the sauce is evenly distributed and slightly thickens, about a minute. Turn the heat off.

Divide the sauced noodles between two bowls and top each with some of the oil from the Chapaghetti package. Place half of the steak in each bowl and finish with sliced radish.