I Need A Gyro Frittata 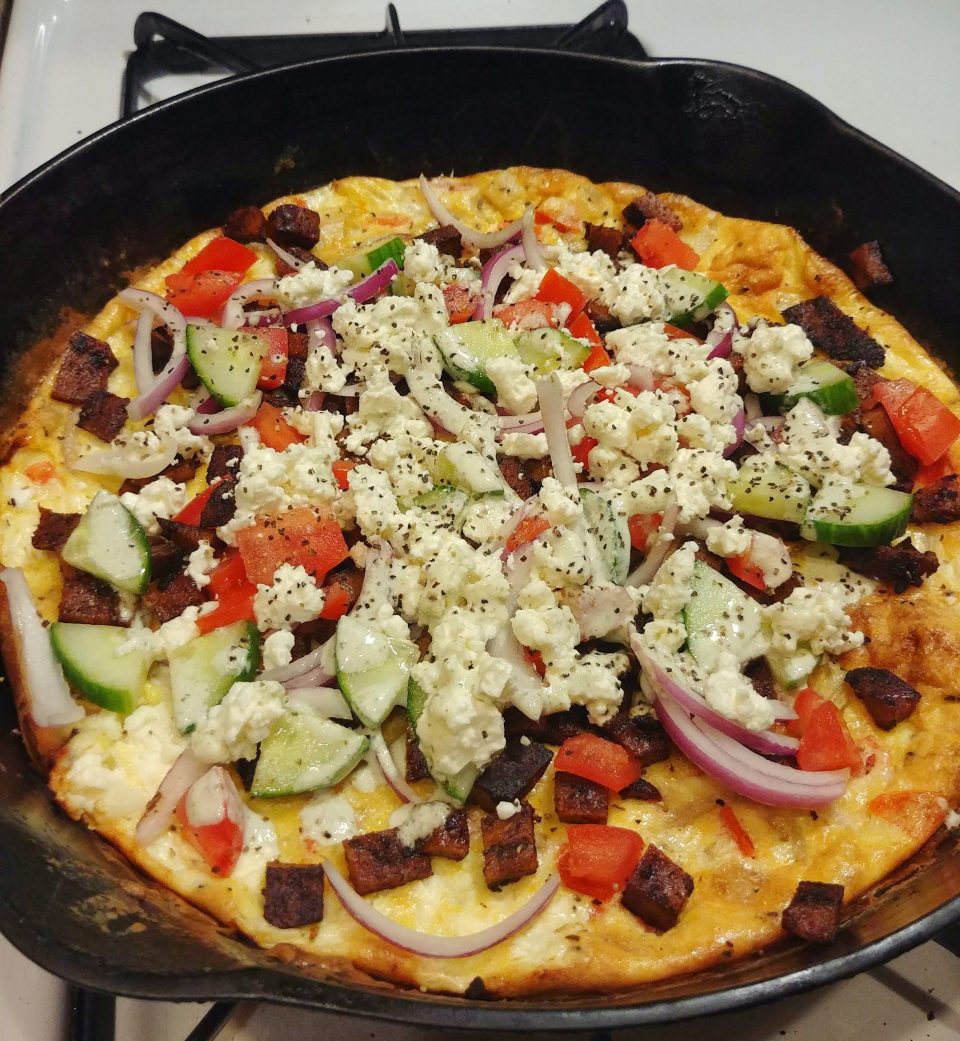 “Through the wind and the chill and the rain and the storm and the flood, I can feel his approach like a fire in my blood.”

Once upon a time, Cherie & I left the big city and moved to a small town upstate NY for a few years. The first year we were there, we were invited to see the annual high school musical. As the town was quite small, this musical was a somewhat major cultural event. Essentially every child in the school participates and pretty much everyone in town shows up. Wanting to be good neighbors, we said “What the Heck! Sure, we’ll go.” Little did we know what was in store for us.

Now, I’m not going to claim either of us are major Footloose fans though we are definitely Kevin Bacon fans. I’ll admit the soundtrack is generally cheesy but it’s got some catchy tunes, and despite the over-the-top lyrics and musical histrionics, the theme song for this recipe is one of them. It’s an iconic ’80s film and soundtrack.

It’s also mostly songs that high schoolers with little or no musical training should not be allowed to perform on a gymnasium stage. I believe it was somewhere around “Almost Paradise” when Cherie leaned over to me and whispered, “Well, there’s a whole bunch of songs dead to me now…” You know that thing where you want to burst out laughing but try to suppress it which only makes you want to laugh harder and you get into a feedback loop with the other person trying not to laugh? Yeah, we security should have just escorted us out.

I have a deep passionate dislike for brunch. On the other hand, I love brinner. This is due to my core beliefs about each meal. Breakfast is just what it says: breaking fast from the night’s sleep or in some cases recovering in the early morning from the night before. (Yes, I know this also describes “brunch” but stick with me.) Lunch is a midday break to refuel for whatever fresh hell might await in the afternoon. Dinner is one’s reward for surviving the day and ease into the night. So, for me, breakfast and lunch are two VERY distinct types of meals with distinct menus. Brunch’s attempt to mash them together, and then add the shitty watered-down pitchers of cocktails and gigantic groups “doing” brunch, makes for a lousy meal regardless of which meal you actually want. Plus, and this may be NYC specific, when I want lunch on a weekend, I don’t want eggs. Yet, almost EVERY joint open for brunch relies on the same crap egg-driven menu with perhaps one even crappier “lunch” item. Fuck that shit!

When it comes to the final meal of the day, though, I really have no set expectations. Could be a bowl of ramyun. Maybe I’m having savory bread pudding. Or maybe a giant black bean burger. What I’m saying is, I am far less didactical about my dinner philosophy than those other two meals. So, when offered the opportunity to have breakfast for dinner, I will almost always gladly say yes.

This particular brinner came during the Great Pandemic of 2020 after having revised an early Music & Food recipe for gyros. As BGC HQ was working on a tight budget with both myself and Cherie (of We Can Tour That fame) unemployed, I relied heavily on my “recombinant cooking philosophy” to keep our food budget down. Recombinant Cooking is pretty simple: take leftovers in the fridge, recombine them, and create a new recipe. Most of these recipes tend to be pretty freestyle in nature, but for this one came directly from the song inspiration.

This is a bit of a non-traditional frittata or at least as I learned to make them. I was taught the ingredients are generally incorporated into the egg mixture usually after first being sauteed. I did a bit of that here, but the plan was more “create an open-face gyro omelet” and I didn’t want the gyro lost in a flurry egg mix. I honestly didn’t think it was going to work very well, but it was surprisingly delicious. Sure, the toppings tend to slightly deflate the frittata, but that wasn’t that big of a deal. It carried through all the flavors of a gyro, the comfort of brinner, and was just the hero meal I had been holding out for.

Preheat oven to 400°F and set the oven rack to the middle of the oven.

Whisk the eggs, milk, salt, and pepper together in a bowl. Do not over whisk – just make sure everything is uniformly combined. Set bowl aside.

Melt the butter in a small skillet over medium heat. Add half of the tomato and red onion and saute until heated through. Pour the eggs into the pan. Tilt the pan to make sure the egg settles evenly over all the vegetables. Let cook for a minute or two until the edges are beginning to set. Sprinkle 1-ounce of feta the cheese over the top and place the pan in the oven and bake until the eggs are set, 8 to 10 minutes. To check, cut a small slit in the center of the frittata. If raw eggs run into the cut, bake for another few minutes; if the eggs are set, pull the frittata from the oven. For a browned, crispy top, run the frittata under the broiler for a minute or two at the end of cooking.