We Don’t Need Another Gyro 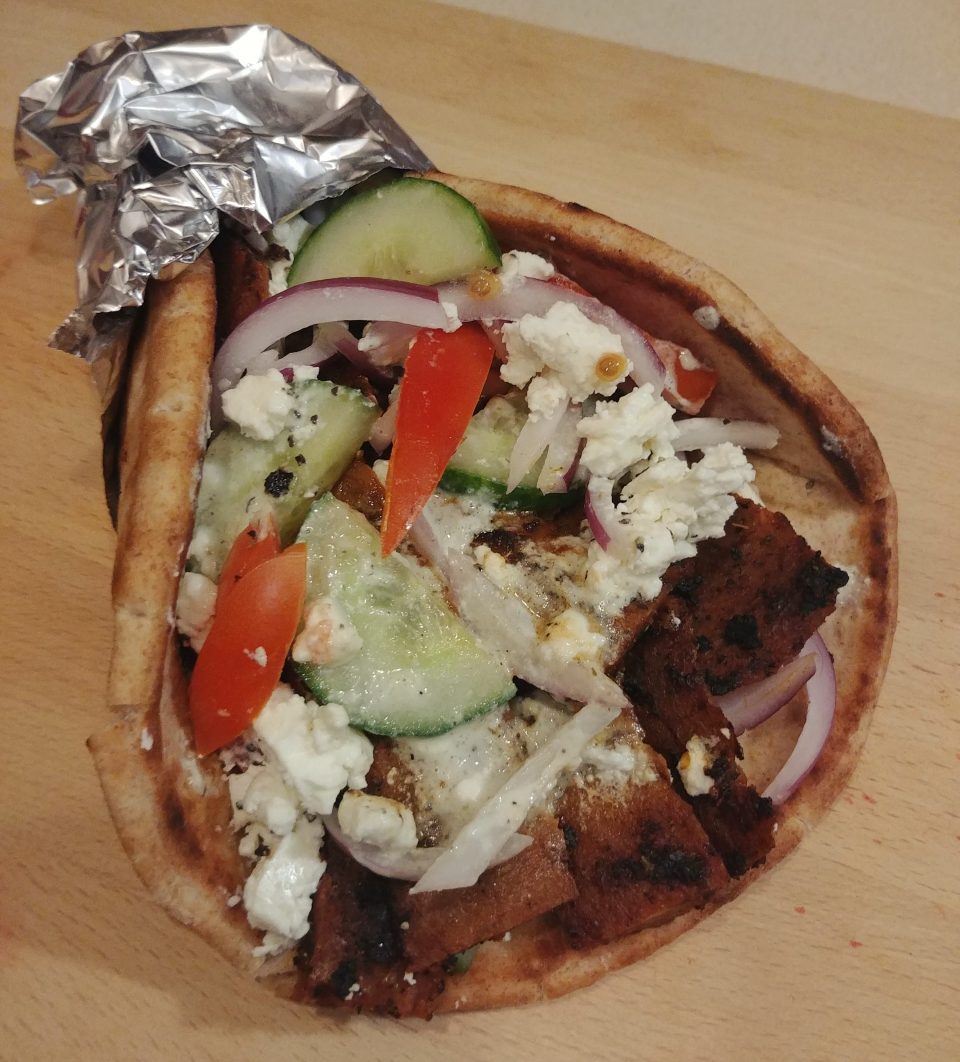 Theme song by Tina Turner “We Don’t Need Another Hero” from Mad Max: Beyond Thunderdome
Listen on Spotify
Listen on YouTube

I prefer Ike & Tina era Tina Turner to solo Tina Turner. I understand that may not be a politically correct opinion, but the music she made then is far superior to the shlocky Top 40 pseudo-soul/pop of her ’80s and ’90s work. I acknowledge that, regardless of era, Turner is one of the finest performers to ever come out of Nutbush, TN. Her appearance as the Acid Queen in Ken Russell’s Tommy is one of a handful of standout performances in an otherwise mess of a film. I have mixed feelings about her scene-chewing Aunty Entity in the film that provides this recipe inspiration. To be honest, chewing scenery is pretty much the sole acting option for a Mad Max film, so to that end, she performed brilliantly. Bonus points, she also got to make the theme song music video with a hunky shirtless saxophone beefcake.

The one thing missing from most post-apocalyptic films is the cuisine. Sure, there’s the whole “zombies eating brains” thing or occasional feral gang cannibalism. The random lizard or roadkill roasting on a spit. Often, it appears to be some sort of watery porridge. Granted, I’m guessing menu planning is a low priority when trying to survive zombies, feral gangs, and mutated insects. But if our plucky survivors have grain for porridge, then it’s possible then have grain for seitan – and seitan beats watery porridge any day.

Seitan is a vegan protein product made with vital wheat gluten. It has a “meatier” texture than tofu and – like tofu – takes on the flavor of seasonings and marinades quite nicely. I had been curious about seitan for years, but honestly never pulled the trigger on cooking it. When I started Music & Food in 2018, I decided to also dive into more plant-based cooking. So, when it came time to make this recipe, I decided to make it with seitan. I went with store-bought as I was still a couple of years from my 2020 dive into Seitan Worship, and I have to say the results were great if not a bit expensive. Commercial seitan ain’t cheap. Two years later, I’ve perfected making seitan at home and decided it was time to revisit this recipe.

The choice to make a seitan gyro mostly originated with having this pun in my notebook but also my long love of gyros in general. They are the sole reason I ever visit a Greek diner. In college, I regularly ate at fast-food gyro joint Olga’s Kitchen despite its questionable quality. Over the years of professional cooking, I’ve made gyro specials when doing lamb roasts. As I have not roasted a lamb at home, I have never made gyros at home. With a craving for a gyro and my seitan making obsession, I wondered if I could make an affordable plant-based gyro from scratch. The answer is a definite yes.

This recipe does involve a bit of a time commitment to get optimal results. I believe seitan is best when chilled overnight. It creates a more meaty texture and develops a better flavor. You could certainly skip the overnight rest and just let the seitan cool down after steaming, then marinate, but you won’t get the maximum flavor. Though I suggest an overnight marinade, I often only marinate the seitan for 4-6 hours. If you’re looking to save on time, shorten the marinade time but keep the overnight rest for the seitan.

This tastes uncannily like a traditional lamb gyro. The marinated Greek seasoned seitan cooked until crisp in a hot cast iron pan even looks a bit like lamb. The texture was spot on and the end result was a perfect meat-free version of a gyro. It was a one-off two years ago for the sake of a food pun but is now going into the regular BGC dinner rotation.

Slice the seitan into 1/2” strips. Place seitan in a ziplock bag and pour in the marinade. Toss to thoroughly coat all of the seitan. Place in the fridge for at least 4 hours, but preferably overnight.

Heat a cast-iron skillet (or heavy bottom skillet) on medium-high for a minute or so. Add olive oil and heat until oil is shimmering. Put the seitan in the hot skillet making sure it is a single layer. Work in batches if your pan is not large enough. Leave the seitan to cook until crispy, about 4 minutes. Flip the pieces and cook for another 4 minutes. Remove from the pan and repeat with the remaining seitan. Set aside.

Toast a flatbread or pita. I usually do this with tongs over a gas flame but I like to live on the edge. Using a hot pan is far safer. You could also place on a sheet pan in a 400° F oven while you were cooking the seitan.

Turn the dough out onto a lightly floured workspace and knead for 8-10 minutes. The dough should show some fibers when stretched out. Roughly shape the dough into a log shape.

Wrap with aluminum foil (or parchment paper and then tightly wrap again with a muslin/cheesecloth) and steam for 1 hour. Let cool in the fridge overnight before using.

Place ingredients in a medium bowl and mix thoroughly with your fingers. Store in an airtight container. You’ll have more seasoning than you need for this recipe. That’s fine as it is great on chicken as well.

Combine all ingredients in a medium bowl. Whisk to thoroughly combine.

Put the cucumber in a colander and sprinkle with the tablespoon of salt (draws water out). Cover with a plate and set something heavy on top. Let sit for 30 minutes. Drain well and wipe dry with a paper towel.

Place all ingredients in a food processor or blender and blend until smooth. Store in an airtight container in the refrigerator.