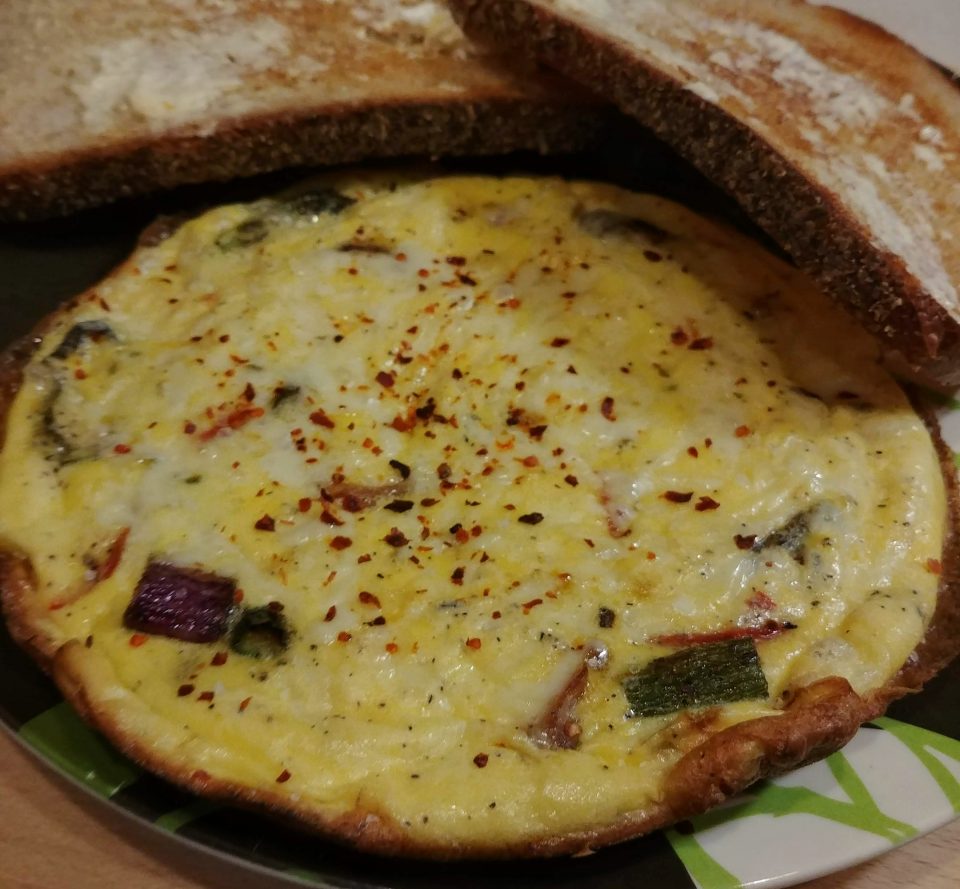 “When the world is running down, you make the best of what’s still around”

My feelings about breakfast vs. brunch are much the same as my feelings about The Police vs. Sting. One is a brilliant sometimes messy way to start the day. The other a pompous, overblown, and usually dreadfully dull experience trying to be some kind of innovative fusion.

I was a big Police fan up until this dish’s inspiration. Their first two albums were groundbreaking white boy pop-reggae-punk releases. Their early live shows were sloppy affairs more akin to a local pub band than a major label signing. I once saw them in a roller rink that doubled as a concert venue in Detroit. High energy, low pretension, everything you wanted in a band during the late 70’s punk scene. By Zenyatta Mondatta, the pop was overtaking the reggae punk. While there were still classics like “Driven To Tears”, “Canary In A Coalmine”, and the theme song for this dish, the inclusion of “De Do Do Do, De Da Da Da” was a dire foreshadow of The Police to come. Two more lackluster Police albums would lead to the even more lackluster and annoying solo rise of Sting.

I rarely go out for breakfast and I certainly never go out for brunch. My hatred is tied to my professional cooking career where all but a truly crazed few hate cooking that Saturday and Sunday watered-down booze abomination. When it comes to breakfast at home, I usually keep things pretty simple: scrambled or fried eggs usually in a sandwich, taco, or burrito (which are all just variations of each other). I love pancakes and waffles but never make them.  I’ve never been an omelet guy, but do I occasionally make frittatas because they require far less work or precision than an omelet.

I was recently inspired to make a frittata due to leftover grilled vegetables I made for some tacos. My frittata strategy is much like my fried rice strategy: see what’s in the fridge and use “the best of what’s still around.” For this recipe, it was grilled asparagus, peppers, and red onion. Next time it could be chicken, tomato, and broccoli. The key is to keep the vegetable and meat component to around one cup for a single serving frittata. I will say I prefer muenster cheese for it’s meltiness and because, in the words of James Van Der Beek, it’s edible lactose gold. The choice of cheese is really “whatever is in the fridge” that will be melty and go well with your vegetables and meat.

Finish this with some sea salt, Aleppo pepper, and sourdough toast, maybe a few dashes of hot sauce, and you’ll be driven to tears by how easy and delicious breakfast can be.

Preheat oven to 400°F and set the oven rack to the middle of the oven.

Whisk the eggs, milk, and salt together in a bowl. Do not over whisk – just make sure everything is uniformly combined. Set bowl aside.

Melt the butter in a small skillet over medium heat. Add the asparagus, peppers, and onion and saute until heated through. Spread the vegetable mixture evenly over the skillet and pour the egg mixture into the pan. Tilt the pan to make sure the egg settles evenly over all the vegetables. Let cook for a minute or two until the edges are beginning to set. Sprinkle the cheese over the top and place in the oven.

Put the pan in the oven and bake until the eggs are set, 8 to 10 minutes. To check, cut a small slit in the center of the frittata. If raw eggs run into the cut, bake for another few minutes; if the eggs are set, pull the frittata from the oven. For a browned, crispy top, run the frittata under the broiler for a minute or two at the end of cooking.

Allow the frittata to cool in the pan for five minutes. Cut into wedges if you’re feeling fancy or want to share. Serve topped with a sprinkle of sea salt and Aleppo pepper.