Cheesed To Meat Me 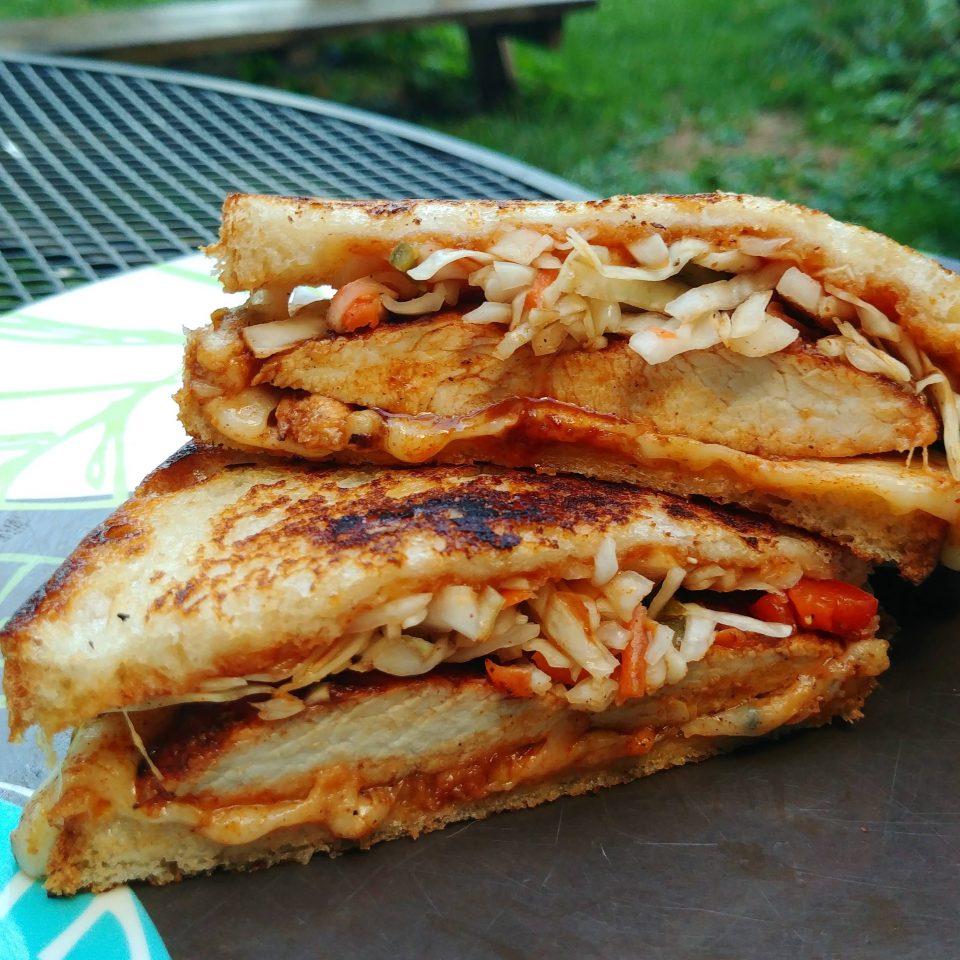 “If he was from Venus, would he feed us with a spoon?”

If I were releasing singles on the Music & Food label, this would most certainly be the B-side to Cheesed To Meat You. They are both technically “melts” as in grilled cheese stuffed with meats. They both have a Southern flair. And they both owe a theme song nod to the Rolling Stones’ “Sympathy For The Devil.” I’d even go so far as to argue The Replacements were, due to their excesses but not their longevity, The Rolling Stones of ’80s alternative rock.

My history with The Reps is too long and storied to tell in this recipe post. I had the fortune to work at Schoolkids in Ann Arbor which for a time was the de facto Michigan base for the Reps on tour. I barely remember several post-show house parties. There were the legendary Joe’s Starr Lounge shows with one featuring a naked Bob Stinson. Plus, the general college years delight at being part of the inner circle for one of my favorite bands. I am far more partial to the Reps’ Twin Tone Years. There are few better drunken party rock albums than Sorry Ma, Forgot To Take Out The Trash. Of the major label years, I think their debut, Tim, is the strongest album, but it also sounds like a major-label album.  By the time they got to making Pleased To Meet Me, it feels like they kept the major label production polish but went back to early Rep songwriting. Paul Westerberg is certainly not as angry or frenzied as Sorry Ma or Hootenanny, but the echoes of those days shine through. Other than the very college radio-friendly single that’s the theme song here, I can only imagine the reaction at the label when this was turned in. While there are a few great moments on later Reps releases, to me Pleased To Meet Me was their last great album.

I chose to make “Alex Chilton” the theme song here for three reasons. First, Chilton was born in Memphis, TN., one of the major BBQ cities in the U.S. I consider this to be a BBQ take on a Georgia Reuben (or Rachel sandwich) which subs turkey and slaw for the usual corned beef and sauerkraut. Second, Big Star is one of my favorite bands. Third, “Alex Chilton” is one of my favorite Reps songs. As this is the rare occasion where a Music & Food dish is named after an album title, I went with my fave track from the album.

This is one of those recipes that just sort of happened. It was a nice afternoon during the long long lockdown of 2020 and I had a couple of chicken breasts in the fridge. I decided I wanted to grill them, but I also wanted something different than the usual make cutlets, season cutlets, and grill cutlets. Sorting through the fridge, I discovered a bottle of dill pickle brine I had forgotten about. I remembered making pickle brined fried chicken, so I decided to experiment with grilled cutlets.

Happily, the results were brilliant. Super moist chicken with just a hint of the dill brine. I think I marinated them for about five hours (forgot to take notes), but I would guess they’d be fine after an hour or two. I definitely would NOT marinate overnight. Six hours would probably be the maximum time for these cutlets. I’m a firm believer in patting off excess marinade, seasoning the meat, then allowing it to rest at room temperature while starting the grill. This lets the meat come up to room temp, and gives the seasoning a bit of time to take hold.

After grilling and resting the chicken, I decided I wanted to make a melt sandwich. If you’re not keen on trying to flip the sandwich with the meat inside, feel free to make a grilled cheese with BBQ sauce then pull it open to add the chicken and slaw. If you are solid on melt flipping, then I still recommend waiting until done to add the slaw. There is nothing worse than hot slaw.

To assemble a sandwich
Preheat a non-stick skillet over medium heat. Butter one side of two slices of sourdough. Place one slice, butter side down, in the skillet. Drizzle some Sweet Lightnin’ on the bread. Top the sauce with one slice of muenster, one chicken cutlet, another slice of cheese, a drizzle of sauce, and the other slice of bread butter side up. Grill until bottom bread is golden, about two minutes. Carefully flip the sandwich and cover it with a lid. Grill another 2-3 minutes until the second side is golden. Remove from the skillet, lift one slice of bread and add some pickle slaw to the sandwich. Cut in half and enjoy!

In a medium bowl, combine the pickle brine, olive oil, and 2 tablespoons of Buffalo Spice. Whisk to thoroughly combine. Place the chicken cutlets in the bowl and toss to coat. Cover the bowl and place in the fridge to marinate for at least an hour and up to 4 hours.

When the chicken is done marinating, remove from the bowl, pat dry, and season both sides of each cutlet with the 1/4 cup of Buffalo Spice. Let rest at room temperature while lighting the charcoal.

For this recipe, I fill a charcoal chimney half full of charcoal. This is a quick cook so you won’t need a ton of charcoal unless you’re grilling other items. When the charcoal is ready, set up the grill for direct grilling and preheat the grill.

When the grill is at temp, place the cutlets over the heat and cook for 4-5 minutes, moving occasionally to keep cutlets from burning. Flip the cutlets and cook another 2 minutes until a thermometer reads 140°F when inserted in the thickest part. Tent the cutlets and let rest 10 minutes before serving.

In a medium bowl, toss cabbage, carrot, and pickles together. In a small bowl, combine vinegar, pickle juice, sugar, garlic powder, salt, and pepper and whisk until thoroughly combined. Pour dressing slaw mix and toss to coat. Place in an airtight container and let rest in refrigerator at least an hour before using it.