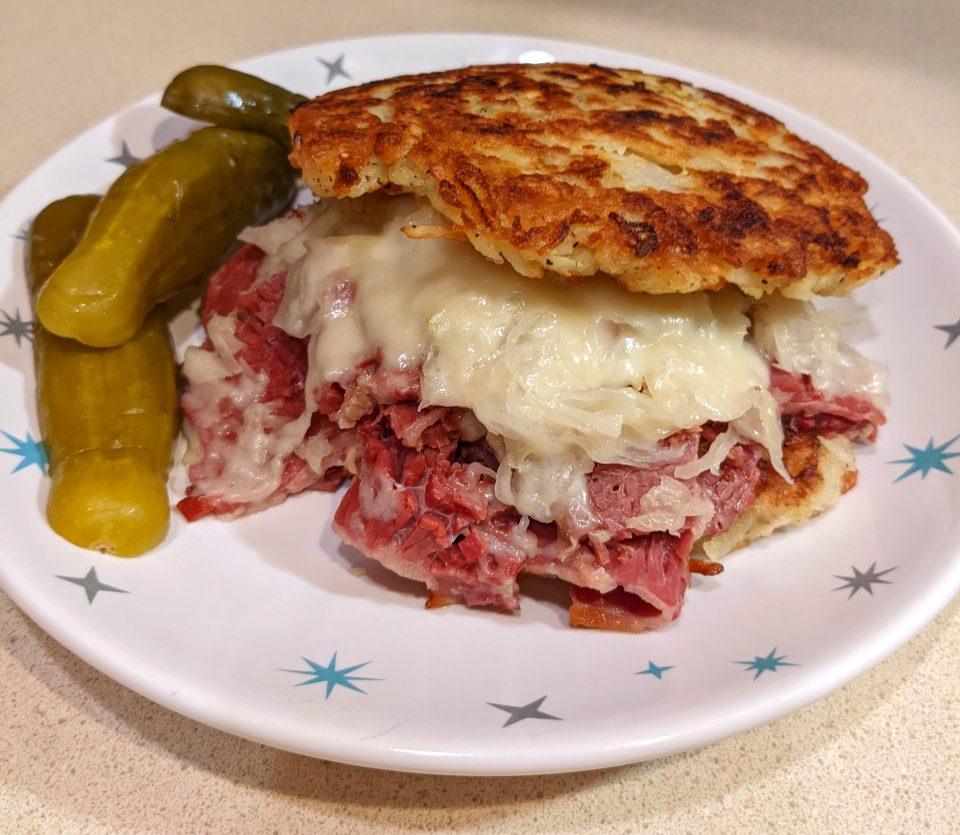 “You need cooling. Baby, I’m not fooling. I’m gonna send ya back to schooling.”

The second Led Zeppelin-inspired dish features one of my Top 10 Zeppelin tracks as a theme song. I first heard this, as many did at the time, via AM Radio which meant the dreaded “radio edit.” When I finally bought Led Zepplin II, I was pleasantly surprised by the extended original though the freak-out breakdown might be a tad self-indulgent, Mr. Page. Nevertheless, this is pure Robert Page swagger – sexy as hell and full of Rock God innuendo though definitely not veiled innuendo. I mean, “I wanna be your backdoor man?” Ummm, okay, Bobby.

For these sandwiches, I decided to make my own 1000 Island Dressing and latke but chose to shop at two NYC institutions for the rest of the ingredients. The corned beef was from the legendary Katz’s Delicatessen. For the sauerkraut and pickles, I went with the Lower East Side Old School joint, The Pickle Guys.

This turned out brilliant. If the latke prep and cooking were quicker, I’d likely do these more often. I recently discovered cauliflower fritters (basically cauliflower latkes) so that may be a future iteration of this. Honestly, any flat vegetable fritter will serve as a great base for this recipe.

Peel potatoes and grate. Place in a bowl lined with a towel & cover with the towel. Grate the onion. Place in the towel with potatoes and gently mix. Wrap the potato and onions up in the cloth, twisting the cloth to secure the bundle, and squeeze firmly to remove excess liquid from the shreds. When liquid stops flowing, open the towel, fluff mixture, wrap again and give a final squeeze.

Pour potato and onion into the clean, dry bowl. Stir the panko breadcrumbs, beaten eggs, salt, and pepper into the potato mixture. Take care to make sure the egg and seasonings are fully mixed throughout the potato shreds. Divide the mixture into 4 equal portions. Shape each portion into a tightly compacted ball.

Put the oil into a skillet and heat it until shimmering. Place two balls carefully into the hot oil. Smash them into disks with a dry spatula. The oil should sizzle but not pop when the latke hits it; if the oil jumps wildly or smokes, it is too hot. If it only bubbles weakly, the oil is not hot enough. Cook the latkes until golden for about 3-5 minutes, flip and cook until the other side is golden. Transfer finished latkes to a wire rack lined with a paper towel in a sheet pan. Repeat with the remaining two balls.

Clean the skillet you fried the latke in leaving a light coating of oil. Place the skillet over medium heat. Divide the corned beef into two piles and place in the skillet, tossing to heat through. Top each pile of corned beef with sauerkraut and Swiss cheese. Add a 1/4 cup of water to the skillet and cover with a lid. Cook until the cheese has melted. Remove from heat.

Take two latkes. Smear 1000 Island on one side of each latke. Place one serving of the skillet corned beef on the bottom latke. Top with the other latke. Repeat for the second sandwich. Serve with a pickle split in half.

Mix all ingredients in a bowl. Store in an airtight container in the fridge.