The Turducken Of Cheeseballs 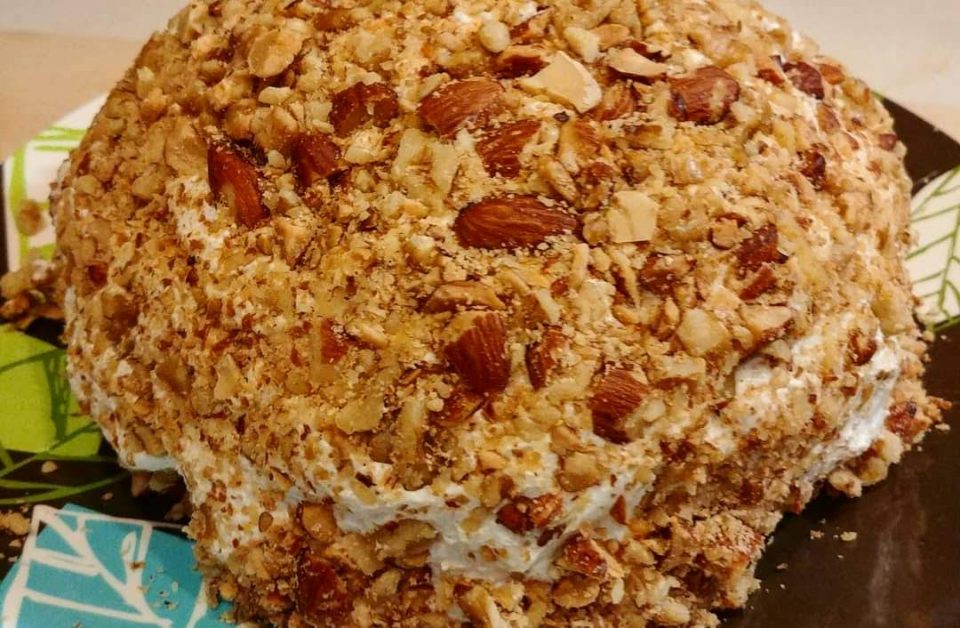 The One Where Frank Makes A Cheeseball Inception

There are those moments in one’s life where a good idea turns into a bad decision. This recipe is, in fact, the result of two bad decisions.

For a brief period of time in late 2018, I ran a Twitch Food Channel named “Hey! I’m Snacking Here!.” You’ll find a handful of archived videos, somewhat out of context, that represents a combination of a cooking show with snack reviews. I give props to Cherie Davis (of We Can Tour That fame) for co-hosting and collaborating on snack ideas. I thought it would be an interesting project to take the recipe content of this site and live stream it weekly alongside sampling an array of snacks. And honestly, it was for a moment. Then it became a grind. Then it almost killed my love of cooking. I look at cooking (even when doing recipe R&D for this site) as meditation. I’m usually alone, working to something on Spotify that would trigger Twitch copyright issues, taking notes, and not interested in building a community. That’s pretty much the antithesis of a Twitch Cooking Stream and the reason it was my first bad decision.;

The second bad decision made for this recipe was, well, making it! My Twitch channel ran from October through December, so that meant holiday recipes. I actually made some fairly interesting recipes even as I was hating the overall process. There’s Partridge In A Pear Chutney which ended up in the first issue of the Music & Food Zine. There’s Elf Breakfast Spaghetti where I took the demented concoction from the movie Elf and turned it into something I’d gladly serve in a restaurant. Elf Spaghetti is in a tie for my Hanukkah-inspired Latke Reuben Slider for my favorite recipe from my Twitch experiment. No, on second thought, that fricking slider wins. 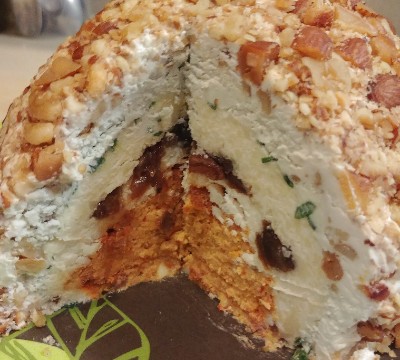 There is, however, no doubt about the loser, and it’s this bad decision of a recipe. I think this might have been one of those viral video recipes  I generally avoid but thought “Ooooo – this’ll make GREAT Twitch content for the holidays and maybe I’ll also go viral and yeah from a culinary standpoint I know I should not make this and I’ll have a fuckton of questionable cheeseball in a two-person house and honestly, even if I had friends I would not subject them to this dairy abomination!” So I made it for the first time (because fuck that I’m not testing this bitch). Live. On Twitch. I could feel my soul dying with each cheeseball layer.

Now here’s the point where I reluctantly admit one thing about this shitty recipe: it is actually tasty. I really hate to admit that, but it is true. For a big party where you’re hoping to terrify guests (especially small children), you can’t go wrong with this FrankenFood creation  It certainly makes an impression though perhaps not the one you intended.

THE TURDUCKEN OF CHEESEBALLS
Makes one giant cheeseball

Form the Pimento cheese into a ball.

Firmly press the chorizo into the Pimento cheese ball.

Place the Manchego and 1/2 cup of the cream cheese in the bowl of a food processor and process until combined, about 30 seconds. Using a rubber spatula, scrape the mixture into your hands and form it into a thin disk large enough to drape over the Pimento cheese ball. (You will not need to wash out the mixer in between layers.) Drape the Manchego disk over the chorizo layer and press firmly on all sides so that it adheres.

Firmly press the dates into the Manchego layer.

Place the Emmentaler and 1/2 cup of the cream cheese into the processor bowl and beat until combined, about 30 seconds. Using the rubber spatula, scrape the mixture into your hands and form it into a thin disk large enough to drape over and completely encase the chorizo layer. Drape the Emmentaler disk over the chorizo layer and press firmly on all sides so that it adheres.

Firmly press the chives into the Emmentaler layer.

Place the Gorgonzola and 1/2 cup of the cream cheese into the processor bowl and beat until combined, about 30 seconds.  Using the rubber spatula, scrape the mixture into your hands and press it evenly over the chives to completely encase the chives layer.

Firmly press the honey cashews into the Gorgonzola layer.

Place the goat cheese and the remaining 1/2 cup of cream cheese into the processor bowl and beat until combined, about 30 seconds. Using the rubber spatula, scrape the mixture into your hands and press it evenly over the cashews to completely encase the cashew layer.

Combine the almonds and walnuts in a small bowl and firmly press the mixture into the goat cheese layer.

Using an offset or large, sturdy flat spatula, transfer the cheese ball to a serving plate. Serve with crackers or slices of baguette. If not serving immediately, cover and refrigerate. Allow the refrigerated cheese ball to sit at room temperature for 15 minutes before serving.