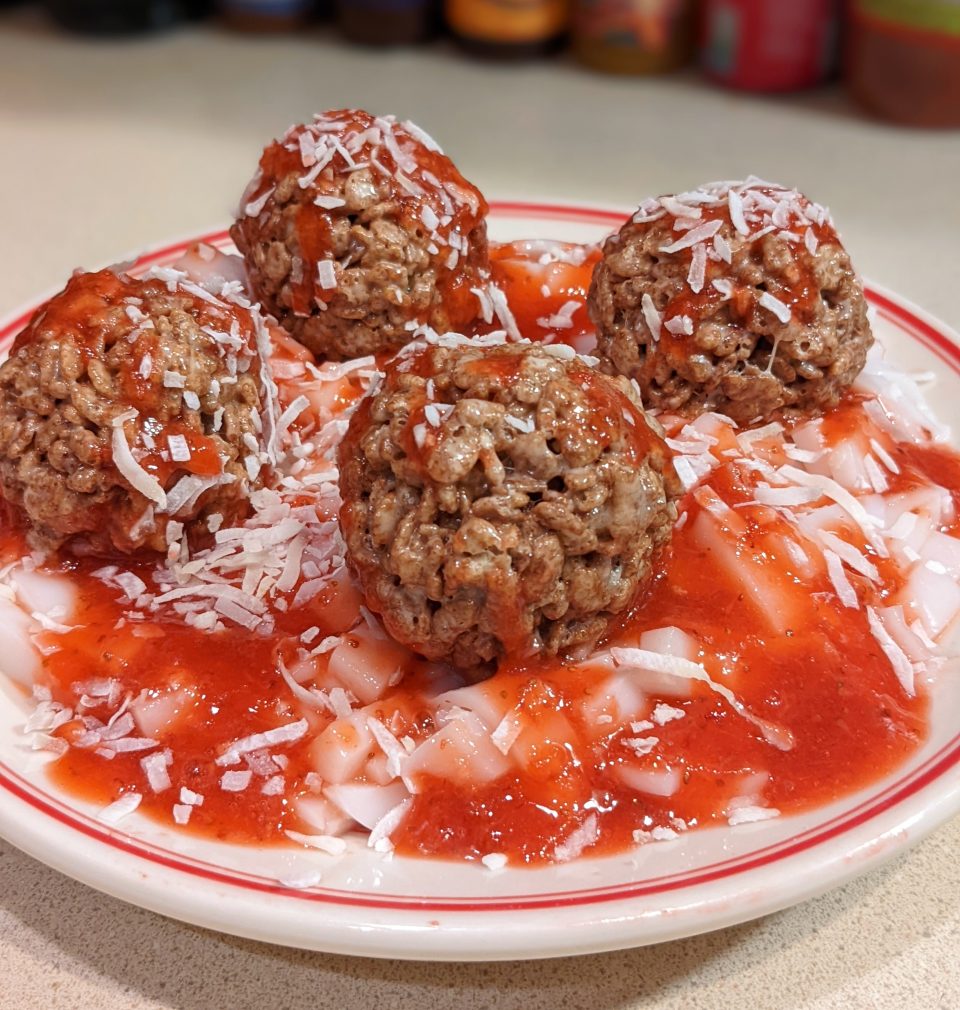 “You sit on a Throne Of Lies”

Leon Redbone is a seriously underappreciated musician and perhaps the Godfather Of Hipster Music. Zooey Deschanel is arguably the Hipster Music Queen especially as part of the brilliant She & Him. Putting Deschanel and Redbone together to sing this, umm, classic seasonal duet for the end credits of Elf was a genius move on the part of the music coordinator. Each performer perfectly compliments the other even as we have to acknowledge the immense creepiness of the lyrics. It’s a great performance the ends a great film, but damn perhaps a different, less stalker-y, song could have been chosen.

Once upon a time, I had a Twitch TV food channel. For our Holiday Candy episode, I needed a recipe that would fit into the sugar-fueled madness. The scene in Elf where Buddy explains the four elf food groups (candy, candy canes, candy corn, and syrup) while making Breakfast Spaghetti was my inspiration:

Given we were planning to consume our annual candy intake during a single hour and a half episode – and Binging With Babish had already made the actual dish from Elf – I set out to make a restaurant-worthy dessert dish inspired by “diabetes on a plate” from the film.

I set a couple of ground rules for the dish. Everything needed to be a confection – no actual pasta or sauce or meat. It needed to look like an actual bowl of pasta. It should taste good but not overly cloying. I am quite happy to say I succeeded on all counts.

The pasta is made with coconut milk set into a jelly using agar powder. It’s a simple four-ingredient recipe: coconut milk, agar powder, sugar, and water. Agar tastes cleaner than gelatin and keeps the dish close vegan if you swap out the butter for coconut oil in the “meatballs”. The coconut noodles will take about two hours to set up in the refrigerator. I recommend using a wire to cut the sheet of coconut jelly into noodles if you do not have solid knife skills.

The “sauce” is a simple strawberry coulis. Three ingredients: strawberries, sugar, and water. Dice the strawberries, put them in a saucepan with sugar and water, and cook until they break down and turn into a thick sauce. Take care not to overcook. You want this to resemble a tomato sauce, not strawberry syrup. You’ll need to cool this to room temperature before assembling the dish.

Finally, the “meatballs”. Cocoa Krispies have a sort of browned ground beef look. Make traditional Cocoa Krispie treats with three ingredients (butter or coconut oil, marshmallows, and Cocoa Krispies), and form into “meatballs”. The dish is finished with a sprinkle of flaked coconut “parmesan”.

This is a remarkably clean dish. Much cleaner than I expected. Not too sweet though the texture of the coconut milk noodles might be odd to some. The coulis with Cocoa Krispie and coconut noodles makes for a bright bite with a light sweetness. Though not really a part of ANY healthy breakfast, this would definitely wow your guests as dessert at your next dinner party.

Stir together coconut milk, water, agar-agar powder, and sugar in a pot. Bring to a boil over medium heat and keep stirring until all the sugar and agar-agar powder has completely dissolved.

Using a 9×11 baking dish, pour the coconut milk mixture to a depth of about 1/8″. You will likely have leftover liquid. Pout into an ice tray or a container for snacking.

Let the liquid in the baking dish cool for 10 minutes on the counter then place into the refrigerator. It will take about an hour for the coconut jelly to completely set. When the jelly has thoroughly set, slice into thin noodles with a sharp knife or wire.

To make the “meatballs,” take tablespoons of the Krispie Treat while still warm and roll them into balls.