Steak Me, I’m Yours 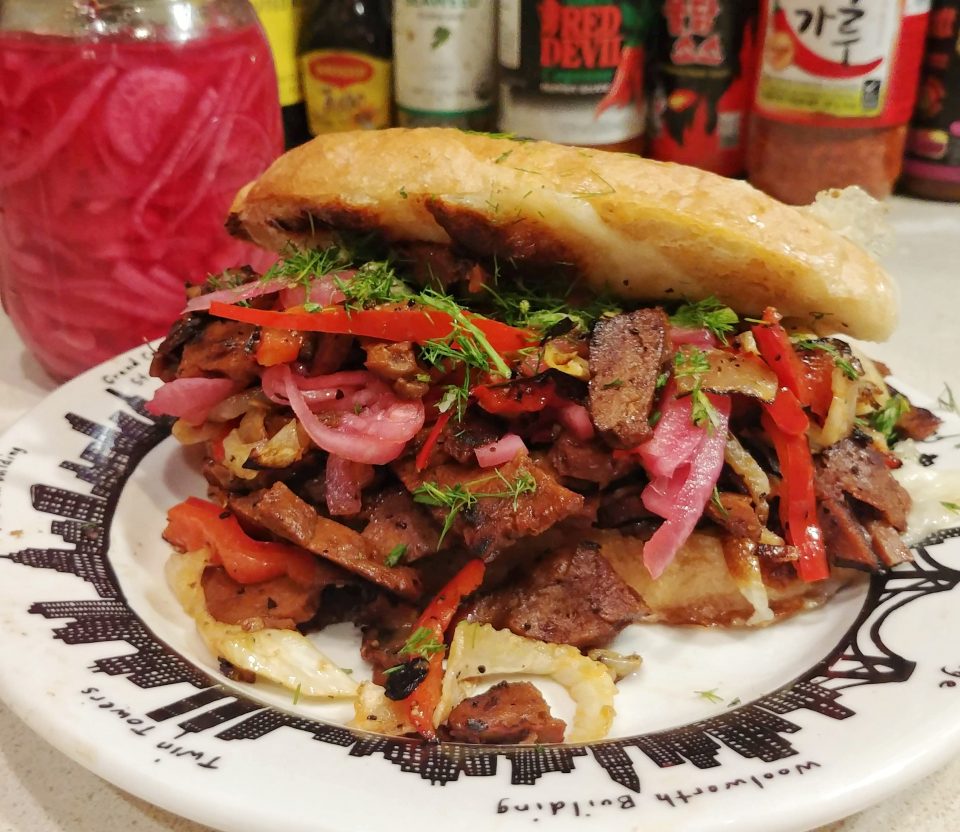 “Take me, I’m yours because dreams are made of this.”

Theme song by Squeeze “Take Me I’m Yours” from U.K. Squeeze
Listen on Spotify
Listen on YouTube

If I had to choose a quintessential British New Wave band that defined the early ’80s, that band would be Squeeze. They combined elements of synth-pop, Britpop, new wave, and even a touch of punk and into brilliant quirky pop tunes. The theme for this recipe is a great example. A synth-pop base & new wave vocal vaguely calling up the Eurythmics but then coupled with pop-punky guitar bursts. Plus, it’s got a hook that’ll stick in your head for days. While  I never owned the U.K Squeeze album, but damn if I don’t know quite a few tracks on it. I prefer the Cool For Cats through Sweets From A Stranger era, but they continued to turn out great songs across every album. What I love most about Squeeze is their sheer pop music joy.

I’m on a mission to prove plant-based sandwiches can be just as decadent as their carnivore cousins. This is a prime example of the mission. No one is going to be fooled by seitan steaks into thinking it’s been, but that’s not the point. This has all the meaty savory messy comfort of any steak and mushroom sandwich. It’s not trying to be steak. It’s trying to be delicious (and succeeds). Really, isn’t that all we really need from a sandwich?

(By the way, you’ll have some leftover steaks from this recipe. Let me suggest making some burritos.)

Combine the butter and garlic in a small bowl and set aside.

In a non-stick skillet, heat 2 tablespoons of olive oil until shimmering. Add the fennel, red pepper, 1 teaspoon of kosher salt, and 1 teaspoon of black pepper. Saute until the fennel is charred and the red pepper is caramelized. Cover and set aside.

Cut the Italian rolls open lengthwise and spread garlic butter on the inside of both rolls. Divide the mozzarella between the rolls, laying in the roll on top of the garlic butter. Place under the broiler until the cheese is melted and the roll is lightly browned.

Divide the seitan and mushrooms between the two rolls. Top with the fennel and red pepper, some pickled red onions, and some of the reserved fennel fronds.

(Alternatively, if you do not have a food processor you can first mash the cooked beans with a fork or potato masher, then add everything together in a large bowl and mix well.)

Turn the mixture out onto a clean work surface and begin to knead it together. It may be a bit crumbly at first, but keep kneading it for a few minutes until it comes together into a tight ball. Let the dough rest for 30 minutes on the counter covered with a clean towel.

After the dough has rested, knead it for 2-3 minutes. Then cut the ball into 5-ounce pieces. Use a rolling pin to roll out each section into 1/2″ thick steaks. The dough will be very tough and stretchy, but just keep working at it until you get your desired steak shapes.

Put the steaks in the steamer basket and cover them with a lid. It’s ok if they are overlapping a bit. Steam for 28 minutes, flipping the steaks halfway through so they steam evenly. They will double in size. Remove from steamer and let cool for 15 minutes.

Place the steaks in a large ziplock bag or air-tight container, mix the marinade ingredients and pour into the bag. Let marinate for a minimum of 30 minutes before cooking, or even better, overnight.

Place red onion in a medium bowl or jar. In a small bowl, combine water, vinegar, sugar, and salt. Mix until sugar dissolves. Pour over red onion and toss to combine. Let sit at room temperature for at least an hour. Store in an airtight container in the fridge.