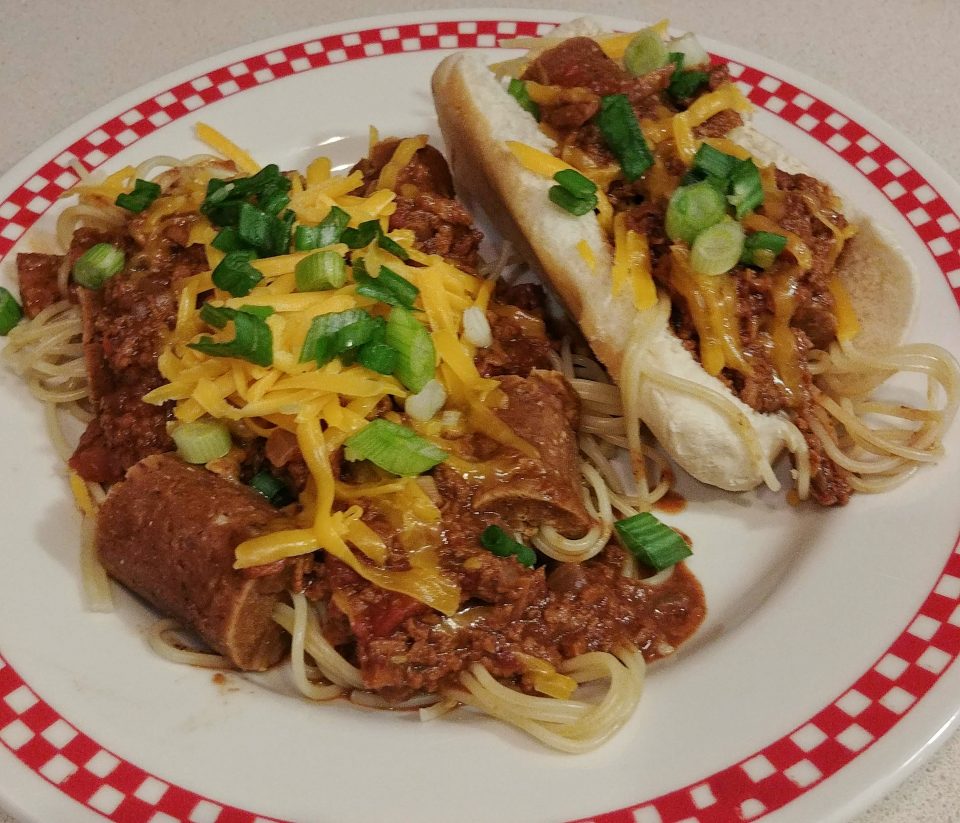 “I’m all messed up on cough syrup now, so just like nevermind (yes ma’am!)”

Punk rock has been the inspiration for several Music & Food recipes. I’m old enough to call myself “punk rock grandpa” and remember both the birth of punk and actual punk rock house parties. I love the OG NY attitude of the Ramones. I dig the pseudo-UK polit-punk of Green Day. Hell, I even have an affection for the pop-punk of Bowling For Soup. And I absolutely adore the brilliant stand-up punk comedy of The Dead Milkmen. At a time where way too many punk bands took themselves way too seriously, the Milkmen said “fuck it – let’s have some fun!” Sloppy goofy nerdy punk fun. I was lucky enough to see them multiple times live in my college years. I owned a “Bitchin’ Camaro” during those years and consider “Punk Rock Girl” to be one of the greatest rock songs ever. I’ll admit the theme here is perhaps one of the weaker Milkmen tracks, but the overall Dead Milkmen vibe is a perfect fit for this culinary joke.

This recipe is the result of seeing a post on Twitter asking whether this is a thing:

The answer clearly should have been “no” but out of what had to be sheer boredom several people began considering what sauce would you top this abomination with. After several clear insults to classic Italian cuisine, I offered the obvious Cincinnati Chili option. That gained traction in the discussion which then led me to push the envelope and ask about placing the whole mess in a bun. “Was the too far?”, I asked. “You’re shoving pasta through hot dogs. What’s too far anymore?”, was the reply.

So I decided to accept the challenge, embrace the madness, and create the Cthulu of Pastafarian nightmares but make it vegetarian because “why the fuck not?” This is the visual record of my descent into the hellscape of pasta impaled sausages. 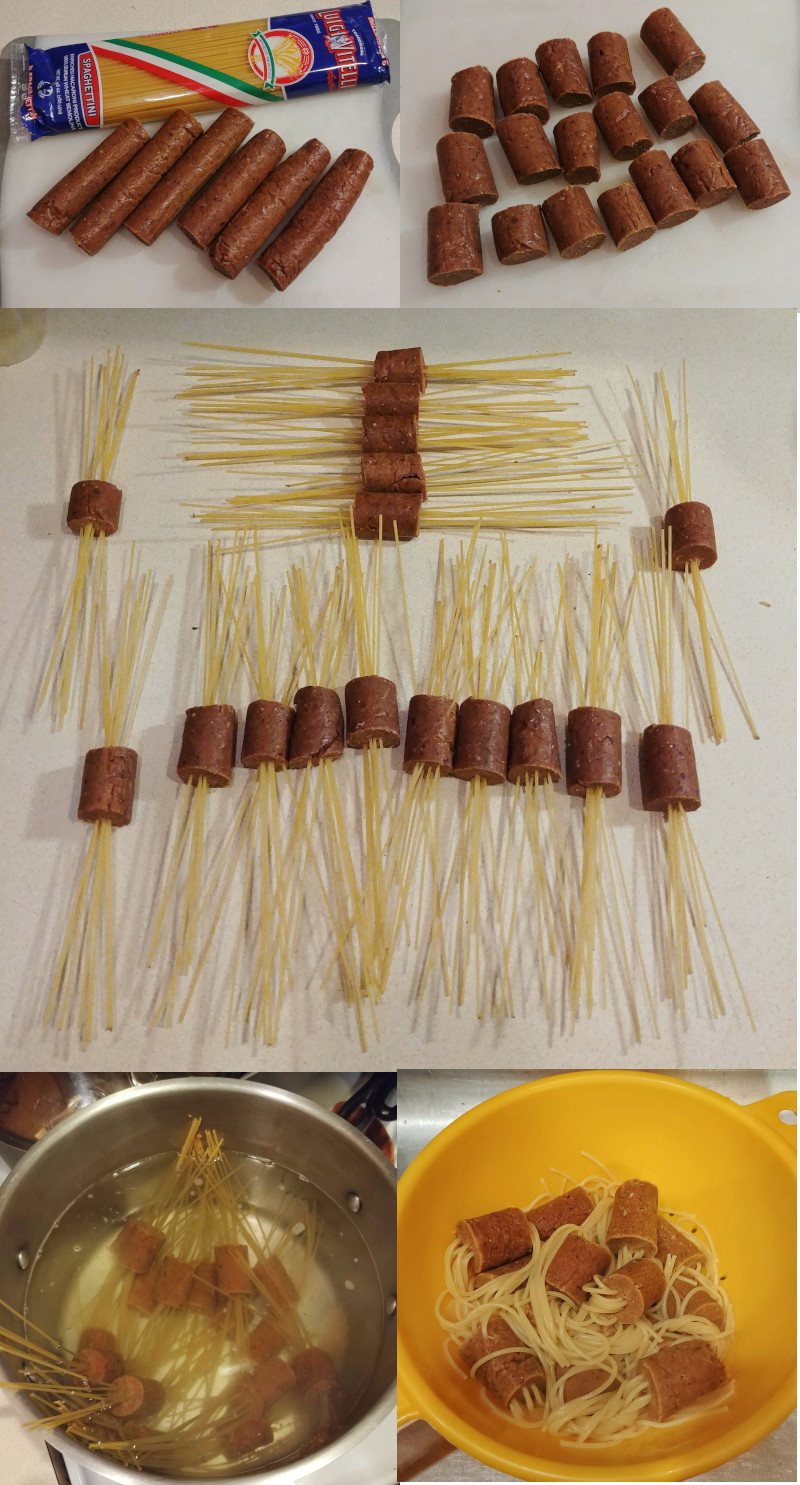 This dish shares several attributes with The Dead Milkmen. Both are easily dismissed as jokes, silly, not worthy of serious consideration. Both are less than attractive but interesting in their own way. And both are surprisingly better than expected. I thought this dish would be dreadful, but both variations were actually kind of good. The “sandwich” version would fit well on a kid’s menu. The “Cincinnati” version is about as good as any Cincinnati Chili service.

While ’80s punk rock definitely needed the sometimes inappropriate sarcasm of the Milkmen, I don’t think anyone in any decade needs this dish. I guarantee I’ll never make it again, ever.

6 seitan hot dogs (see recipe below) [you could also use your favorite hot dog or sausage]
4 to 5 ounces of spaghetti (use a relatively thick spaghetti)
Kinda Like Skyline Chili (see recipe below)
4-ounces cheddar, shredded
1 scallion, sliced
1 potato roll

Place a large pot of water on to boil.

Cut the hot dogs into thirds and lightly roll them on the cutting board to soften. Carefully shove a bunch of pasta into each piece of hot dog. The pieces should be about midway down the pasta. This process is a pain in the ass as dry pasta is wicked delicate and you will be constantly breaking pieces just as you think you’ve succeeded. Your repeated failure here will somehow be a metaphor for persevering in life.

Once you’ve finally stopped cursing the pasta gods and gotten all of your hot dogs impaled, place the bundles in the boiling water and cook according to the pasta instructions. Do not attempt to stir while cooking as there no telling how these bundles will react to being agitated in boiling water.

When finished cooking, you’ll be surprised to find you can actually dump the pot into a colander and drain like any regular non-abomination pasta. I suppose by this point whatever resistance the pasta and hot dogs had was long ago cooked out. It has been transformed into a new entity: pastabilly

Place two pieces of pastabilly in a hot dog bun. Top with chili, cheddar, and scallions. Place on one side of a plate. On the other, place 4-6 pieces of pastabilly (depending on your willingness to stare into the abyss) and top with a ladle or two of chili. Add a generous helping of cheddar and a sprinkle of scallion. Dig in and ponder what went wrong in your life that brought you to this point.

Add all ingredients except the seitan to a large pot. Bring to a boil and simmer for 15 minutes.  Add in the seitan and continue simmering for an hour stirring occasionally until the sauce has thickened quite a bit.

Place the vital wheat gluten in a large bowl.

In a food processor, add the remaining ingredients. Blend on high until it’s smooth and saucy. Pour this sauce into the bowl with the vital wheat gluten. Use a spoon or spatula to thoroughly combine everything. When it gets too hard to mix, use your hands. You do not want any dry spots. Form into a ball and let the dough rest for 30 minutes covered with a clean towel.

Turn the dough out onto a cutting board and knead with your hands for 2-3 minutes.

Cut a 1 pound piece off of the dough and roll into the shape of a small salami or deli loaf. Wrap tightly in foil and set aside.

Divide the remaining seitan into 2 1/2-ounce chunks. Roll and press the seitan into a sausage shape. Roll each sausage in aluminum foil. Twist the ends so that the seitan is completely closed off. Add the seitan sausages and loaf into a steamer basket and let them steam for 40-50 minutes.