Paint A Little Can Of Soup 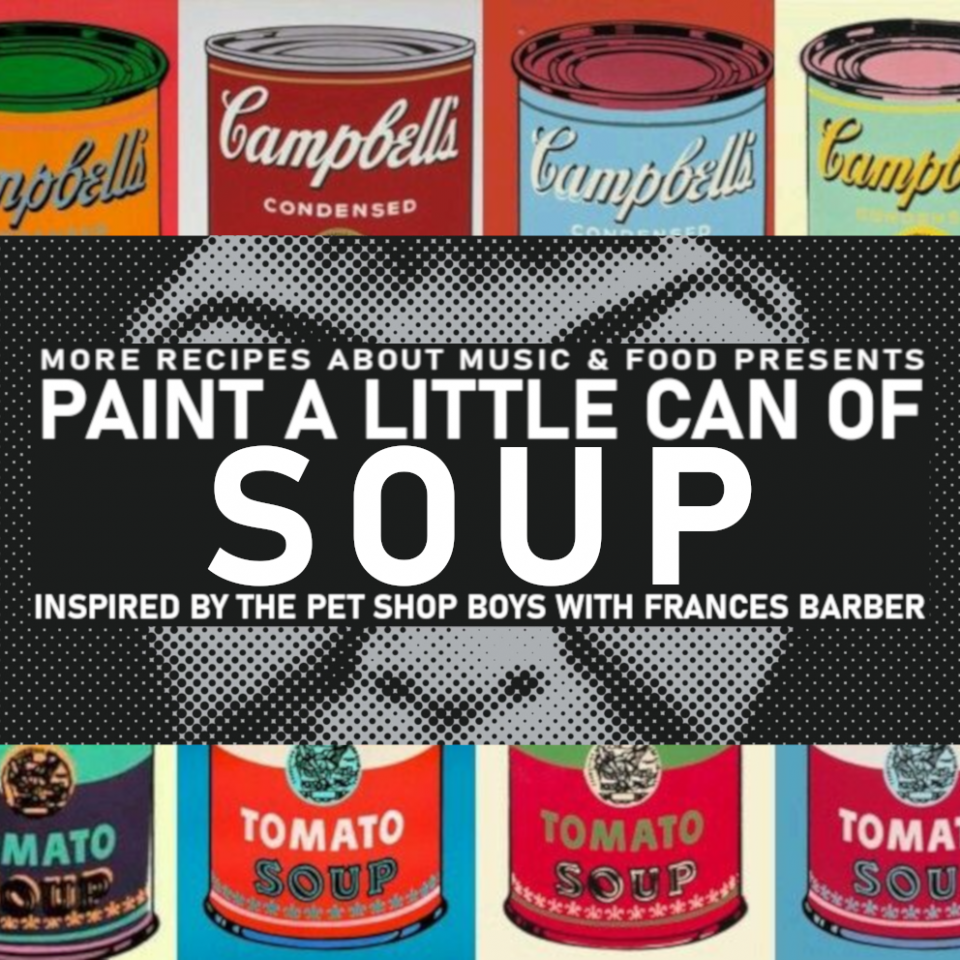 The mission of More Recipes About Music & Food is simple: create easy delicious recipes based around some sort of musical inspiration. Usually, it’s a bad music & food pun as represented solidly in these recipes. These recipes then get collected into a common theme cookbook as in my first two: hot dogs & vegetarian.

While I was working on writing recipes for a “things in a bowl” cookbook, I came across a song on the latest Pet Shop Boys EP. Taken from a cabaret collaboration with Jonathan Harvey & Frances Barber, “SOUP” is both a winter’s menu worth of delicious soups and a fitting tribute to Andy Warhol’s Campbell Soup Can prints.

I had been planning a “Cooking The Album” series and with Winter 2019 on the way, this seemed like the perfect time to combine the punniness of Music & Food with a roadmap laid out in lyrical form.

While this collection has a lyrical inspiration from the soups in the song, I intend to continue the Music & Food standard music food pun even if the pun is not Pet Shop Boys related. I hope to have all the soups mentioned in the song written and collected before winter is done.

ISSUE #1 ON SALE NOW!
If you’re looking for a comforting gift for yourself or a soup loving friend, Paint A Little Can Of Soup Issue #1 is available in the Shop Of The Pops featuring Chicken Vegetable, Roasted Tomato with Grilled Cheese, Mushroom Stew, and Corn Chowder.

A nice can of soup
can help you
when you’re stuck in a loop
If you’re feeling hungry
alone and angry
heat up a little can of soup
It won’t let you down
– the Pet Shop Boys, “SOUP” from MUZIK

BOWLING FOR CHICKEN SOUP
Technically, the “SOUP” lyrics reference Chicken Noodle soup, but Dear Whatever-Diety-You-Worship NO. Noodles or even rice do NOTHING to improve a beautifully crafted chicken soup. More often than not, they contribute to a mushy bowl of meh that really has no claim to being the classic WMCD (Weapon Of Major Cold Destruction). Additionally, soups with noodles or rice, at least in my experience, freeze horribly! So, my choice was another Warhol Soup Can: Chicken Vegetable. I go a bit spicy here with Ro-Tel tomatoes and one of my old BBQ spice rubs as a soup seasoning. I keep the vegetables fairly classic though honestly, you could add a variety of seasonal choices.

THE CHEESY LOVER
Again I take liberties with the ”SOUP” lyric, “cream of tomato”, but actually go with a far more iconic Warhol can. His Tomato Soup can is, in my opinion, one of the Top Five moments in the Pop Art Movement, Simplistic in execution (basically a silkscreen image of a store-bought can) but brilliant in concept. Campbell’s Tomato Soup was (and still sadly is) a core item in Midwest culinary tradition. For Warhol to elevate something so ubiquitous to “art level” was both genius and a major dick move rolled into one act artistic consumerism.

STEW ARE YOU
There is NEVER a reason to make Cream Of Mushroom soup (which is “SOUP”’s lyrical mention). Yes – Warhol silkscreened this particular Campbell’s “flavor” (and I use that term VERY loosely)./ Yes – this for some unholy reason became a Midwest staple for casserole bases in the ‘60s/’70s. NONE of that changes the fact mushrooms in a cream base is a culinary abomination doing zero for the brilliant earthiness of mushrooms. Instead, make a vegan mushroom stew with all the heartiness of its beefy cousin and will still satisfy the carnivore in your life.

CORN THIS WAY
We’re completely off script with this one. The “SOUP” lyric calls for “cream of sweetcorn” which, to the best of my research, Warhol never painted. I have a VERY bad history with cream soups so wanted to try a new technique. That meant both vegan and chowder. So, while this is a creamy soup with sweetcorn, it is NOT technically cream of sweetcorn.

MINESTRONE
Don’t let the fancy Italian name deter you, there is nothing difficult or fancy about this soup. Just a solid comforting bowl of vegetable soup with beans & pasta. This is also a blank canvas soup allowing you to vary the vegetables depending on what’s in season. It freezes well so make a big batch and freeze half for later.