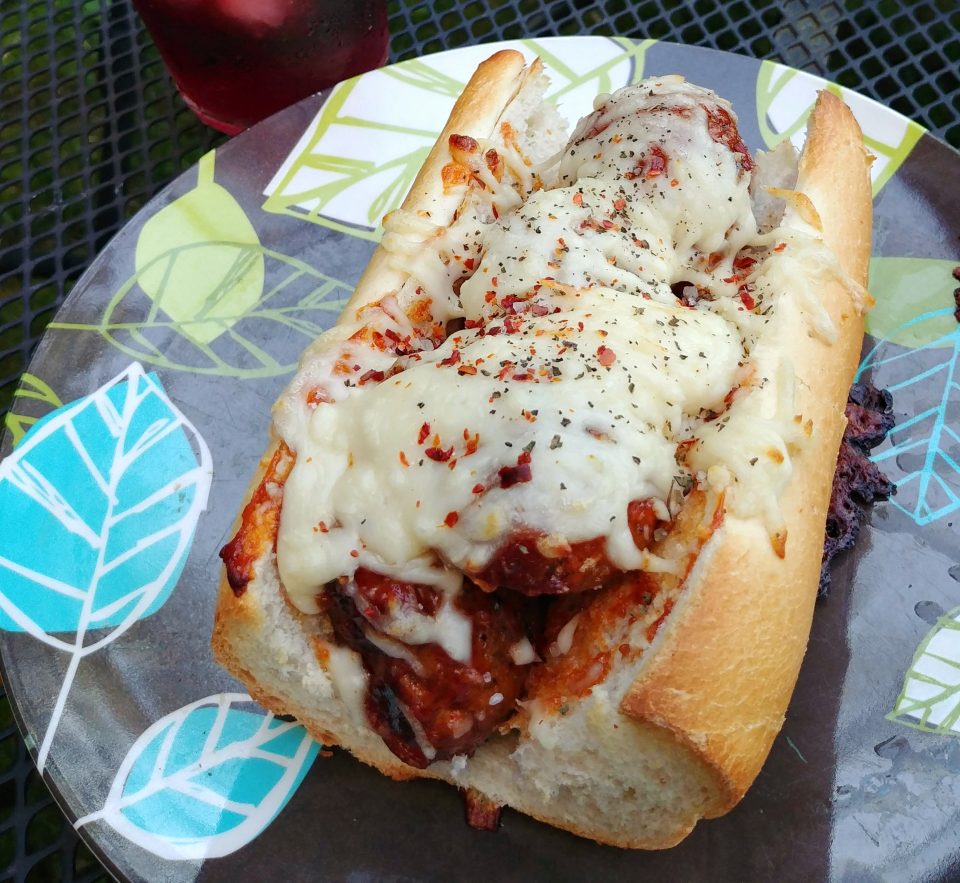 “I won’t take no prisoners, won’t spare no lives”

I am a sucker for killer hard rock & metal intros.

Most modern songs skip an intro much like movies skip opening titles, but a great intro can set the whole tone for a song. Black Sabbath’s “Iron Man” would not be near as epic without the initial “I AM IRONMAN” followed by that crushing riff. “ALL ABOARD!” followed by Ozzy’s maniacal laugh and “I – I – I” leading into the bassline and classic Randy Rhoads guitar of “Crazy Train.” The thin choppy guitar sound before “Smells Like Teen Spirit” unleashes. The creepy midnight bells and slow guitar dirge intro for one of the most underappreciated AC/DC tracks.

Given this sandwich comes from a recent deep dive into Seitan Worship, I suppose I should’ve used a Black Sabbath song title, but I couldn’t find one with the “bells to balls” pun. To be honest, I am a “just the rockin’ hits” kind of AC/DC fan. I’ve never owned an album, rarely pull up an album on Spotify to play, but nonetheless love it when they show up in a playlist. They are an iconic “bang your head” band that, unless there are deep cuts I know nothing about, never bothered with the sentimental power ballad. Putting a healthy dose of AC/DC hits into a party playlist guarantees a great time.

This recipe originally used walnuts to add fattiness and texture, but let’s face it, nuts are expensive. Plus, with the rise in nut allergies, if I ever wanted to use these balls for a pop-up or competition, I’d need something nut-free. Specifically mashed potato. I honestly never thought adding starch to seitan would result in a great meatball-like texture, but it truly does. I simmer these in marinara and they are delicious. They absorb the marinara like a traditional meatball and hold their texture perfectly. Start with a quick fry, add the marinara, then reduce heat and simmer for 15-20 minutes.

I was looking for something a bit hotter for this sandwich so after frying, I tossed them in some of my Sweet Lightnin’ BBQ sauce. It’s a brown sugar jalapeno sauce that brings a subtle heat with balanced sweetness and goes nicely with the melted cheeses. Would it fool carnivores? Definitely not. Is it a delicious and healthier take on a standard meatball parm? Definitely.

Place the sub roll under the broiler to lightly toast. Remove from the broiler and set aside.

Place a skillet over medium heat and add the olive oil. When the oil just starts to shimmer, add the seitan balls and toss to coat. Let the balls fry for 2 minutes tossing to keep from burning and to brown on all sides. Add the BBQ sauce, toss to coat, and simmer for 3 minutes stirring occasionally to glaze the balls.

Spread some of the BBQ sauce on the inside of the sub roll. Place the seitan balls in the sub roll. Top with the mozzarella and Asiago (of vegan mozz & nooch). Place under the broiler until the cheese is melted and bubbly. Finish with a sprinkle of dried basil, Aleppo pepper, and sea salt.

Boil the potato until soft. Drain and mash. Set aside to cool.

Meanwhile, combine the chickpeas, onion (roughly chopped), garlic, the soy sauce, and vegetable stock in a blender or food processor and blend until smooth.

In a bowl, combine the vital wheat gluten, paprika, oregano, basil, nutritional yeast, mashed potato, and liquid mixture. Mix to combine then use your hands to mash the mixture together into a dough.

Tear off portions of the dough and roll them into meatballs. Place them on a lightly greased or paper-lined pan and bake for 20 minutes, flipping them over at 10 minutes. You can eat them still warm from the oven or you can let them cool and reheat them later. I find that letting them cool helps them firm up to a more meaty texture.