Blue Is The Warmest Takis 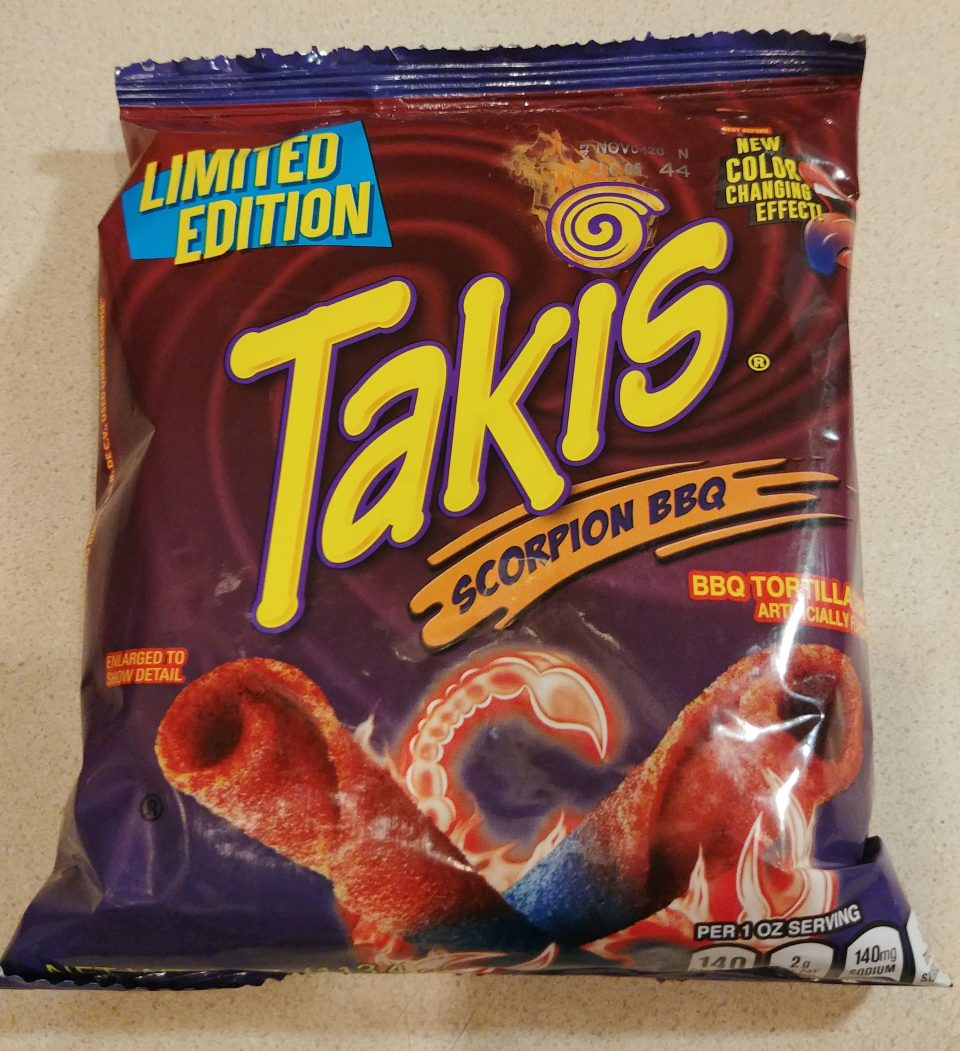 This is a departure from my usual recipe content to kick off a new project, Hey! I’m Snacking Here! Once upon a time, that was the name of a very short-lived Twitch food show I hosted with Cherie (of We Can Tour That fame). I would do a bit of cooking and we would sample and live review a variety of snacks. We ultimately decided the grind of producing a weekly Twitch show, especially one where I was live streaming cooking, was just not our thing. We retired the show but did not stop our love for finding interesting snacks.  Of the ensuing years, I’ve posted a few snack reviews on the BGC Instagram feed, but now I’ve decided to add them to the site and maybe (just maybe) launch a zine series and podcast for them.

Don’t read too much into the punny title for this. I have never actually seen Blue Is The Warmest Color mostly because it’s French, has subtitles, and I spent 10 years of my life as a film student/nerd. These days, if I’m going to watch a film, I truly am not interested in reading or even being challenged. I’ve been there, done that, and have a degree in film theory that I never used. I’m certain Blue Is The Warmest Color is a great and important film, but for purposes here, it’s just a pun that will make sense later.

It’s fitting my first official Snacking Here post would be for Takis. Since moving to Bushwick in 2012 and finding Takis at my local bodega, I’ve been hooked. A lot of the major U.S. snack companies claim to have spicy or hot chips, but Takis truly bring the heat. Even at their mildest, Takis are some of the hottest mass-produced snacks on the planet. 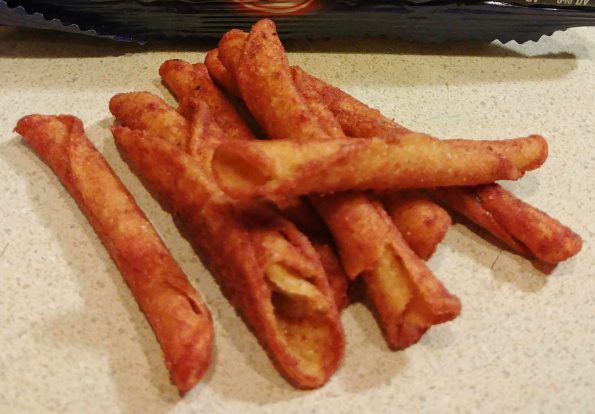 In case you’ve never had the pleasure of Takis, they are something like a rolled corn chip. I believe the name refers to their resemblance to tiny taquitos. Their site currently lists five stock flavors and having had all five, I can attest to there not being what could be called “mild” in the bunch, and that includes their “Guacamole Takis.”

Much like Cheetos, they are coated with a powder that invariably coats your fingers & tongue. As most Takis are in the chili-Fuego-spicy genre of snacks, that coating usually results in a deep red or orange. 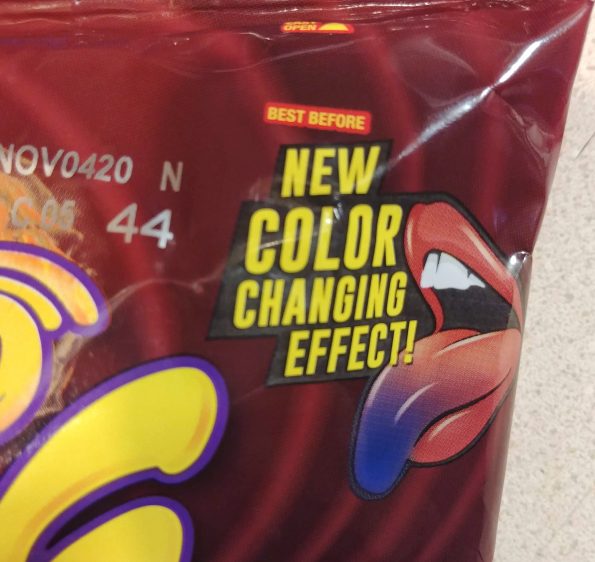 Unless you happen to score a bag of the Limited Edition Scorpion BBQ flavor with “New Color Changing Effect.” Cherie knows I am a sucker for stunt snacks and gimmicks, so when she spotted these at a local grocery, she had to buy them.

I would have loved to be in the marketing meeting at Barcel USA (Takis’ manufacturer) for the pitch meeting on this. Was the idea that if one gets stung by a scorpion, one has difficulty breathing so would start turning blue? Is there some “Blue Scorpion” legend I am not familiar with? Or was it just simply “This will be great for pranking your friends!” I honestly have no clue WHY anyone would do this other than they could and clearly did.

THE TASTE TEST
Before I get into the actual experience of eating these, let me get my flavor review out of the way. These are some of the mildest Takis I’ve ever had. The flavor is essentially a take on a standard BBQ potato chip. There is no initial spice kick or even a slow build over the course of eating the bag. If you’re going to claim something is “scorpion,” you should provide a snack with a deadly sting. These are, like basically every Takis, tasty and somewhat satisfying, but certainly lack the punch of its more traditional, less limited edition novelty focused siblings. 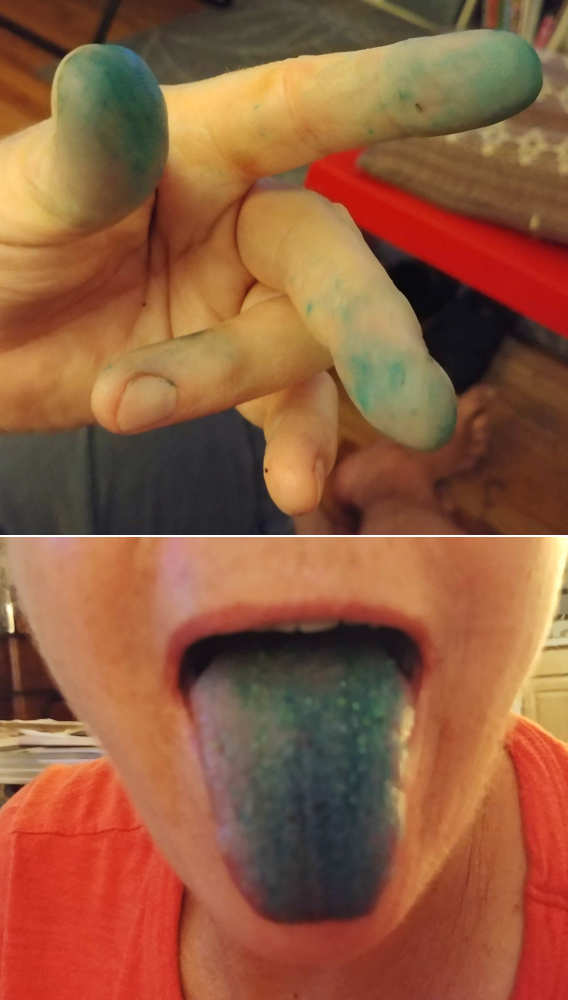 THE NOVELTY TEST
Let’s face it, the flavor is likely not the draw here. It’s the limited edition novelty of “color-changing effect.” Translated from marketing & packaging design speak, that means the coating on these Takis turn your fingers and tongue blue.

From the novelty standpoint, this is a clear home run. I don’t know what I was expecting going into the tasting, but the sheer force with which these snacks dye your fingers and tongue is truly impressive. Of course, the more you eat, the deeper the staining gets. I even ended up turning a napkin into a lovely tye-dye project.

Then came the REALLY scary part: this dye doesn’t wash off. Thanks to Pandemic 2020, I have become an expert in the surgical scrubbing. After multiple rounds, some with dish detergent, and a kitchen scrubber, my fingers remained stained. Same result when brushing teeth and tongue. Multiple rounds of mouthwash, brushing, and rinsing did nothing to diminish the color. The tongue color faded in a day. My fingers, however, retained The Mark of Scorpion BBQ Takis for a couple of days.

Without providing too much information, let’s just say the morning after I discovered one more part of the Takis Scorpion BBQ Color Changing Effect. Let just say, the dye appears to survive the digestive tract with what some might say are frightening results. I found it amusing and yet another example of how this limited edition snack truly is the gift that keeps on giving.

Overall, this is an OK addition to the Takis line. It lacks any real spice though it a better than average BBQ flavor. Clearly, though, this is about attracting Takis fans to a limited edition item and perhaps setting up their unsuspecting friends for a descent into Snacking Smurfdom.