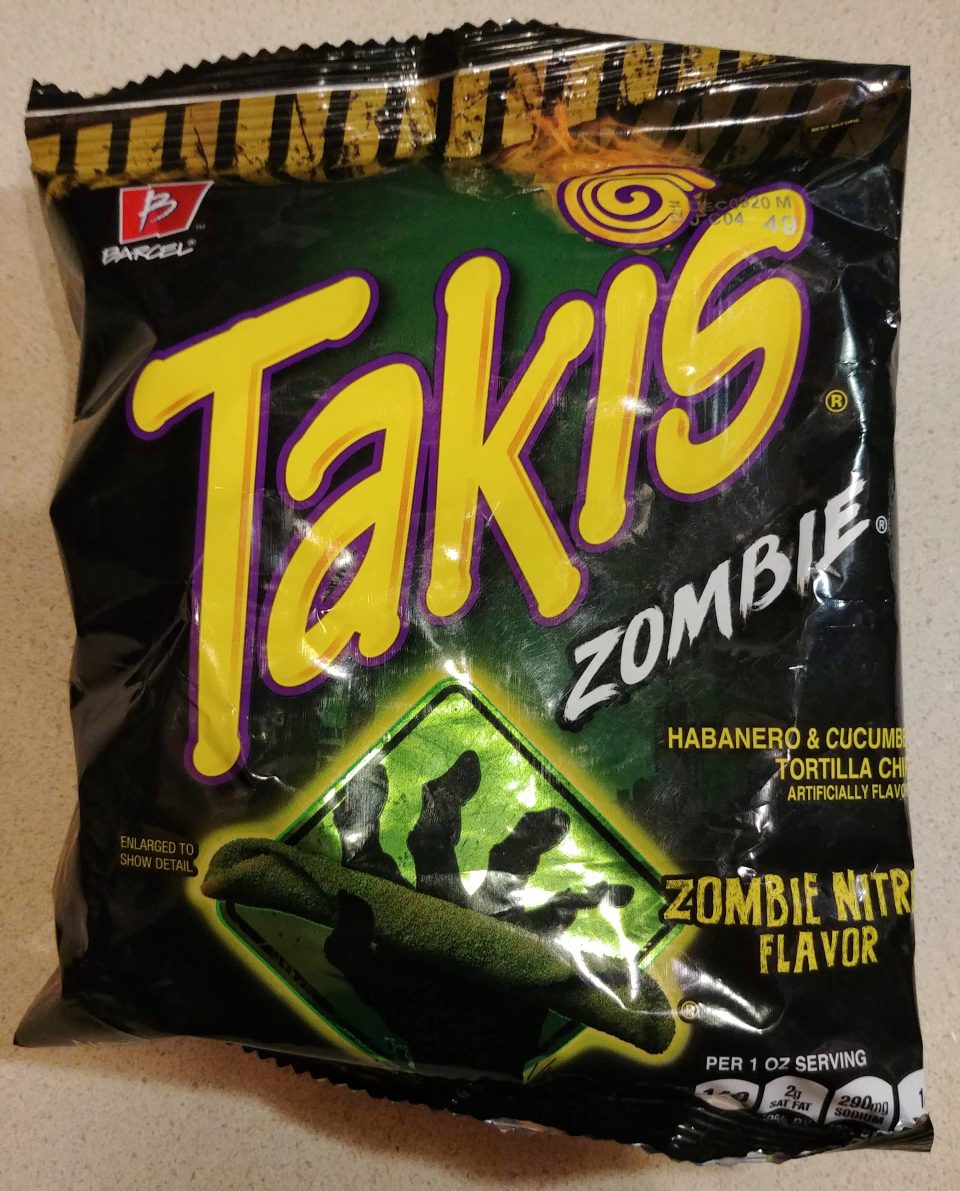 In recent years I have seen some truly brilliant twists on the Zombie genre. Zomboat! turned the dry British brilliance of Shaun Of The Dead into a surprising enjoyable TV comedy. Little Monsters took 28 Days Later to summer camp. Anna And The Apocalypse broke completely new ground as the first Zombie Christmas Musical. Suffice it to say, when either Cherie (of We Can Tour That fame) or I see “zombie” we’re up for whatever comes next. 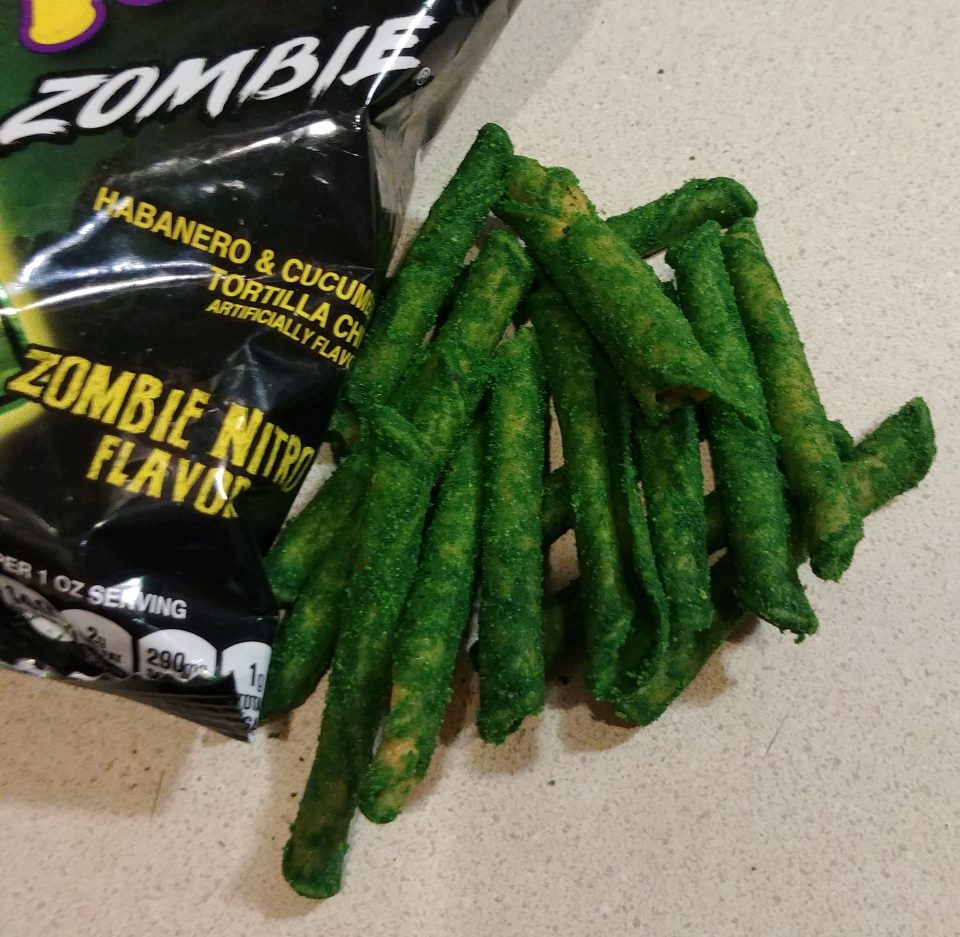 Pretty much every brand of food and drink releases some sort of “spooky” themed limited October edition. Most go with the ultra-basic “pumpkin spice” variation. Some choose to take normally colored food and beverage and dye it black. A few go the extra mile and make pumpkin or black cat-shaped versions of their October flavored products.

Cherie spotted these limited edition snacks on a recent grocery trip. We had marginally enjoyed the Limited Edition Scorpion BBQ Takis, so she grabbed a bag of these despite their proclamation of being “habanero & cucumber” flavor. She’s very much Team Anti-Cucumber having told me on multiple occasions she cannot stand their smell and taste.

She had nothing to worry about. 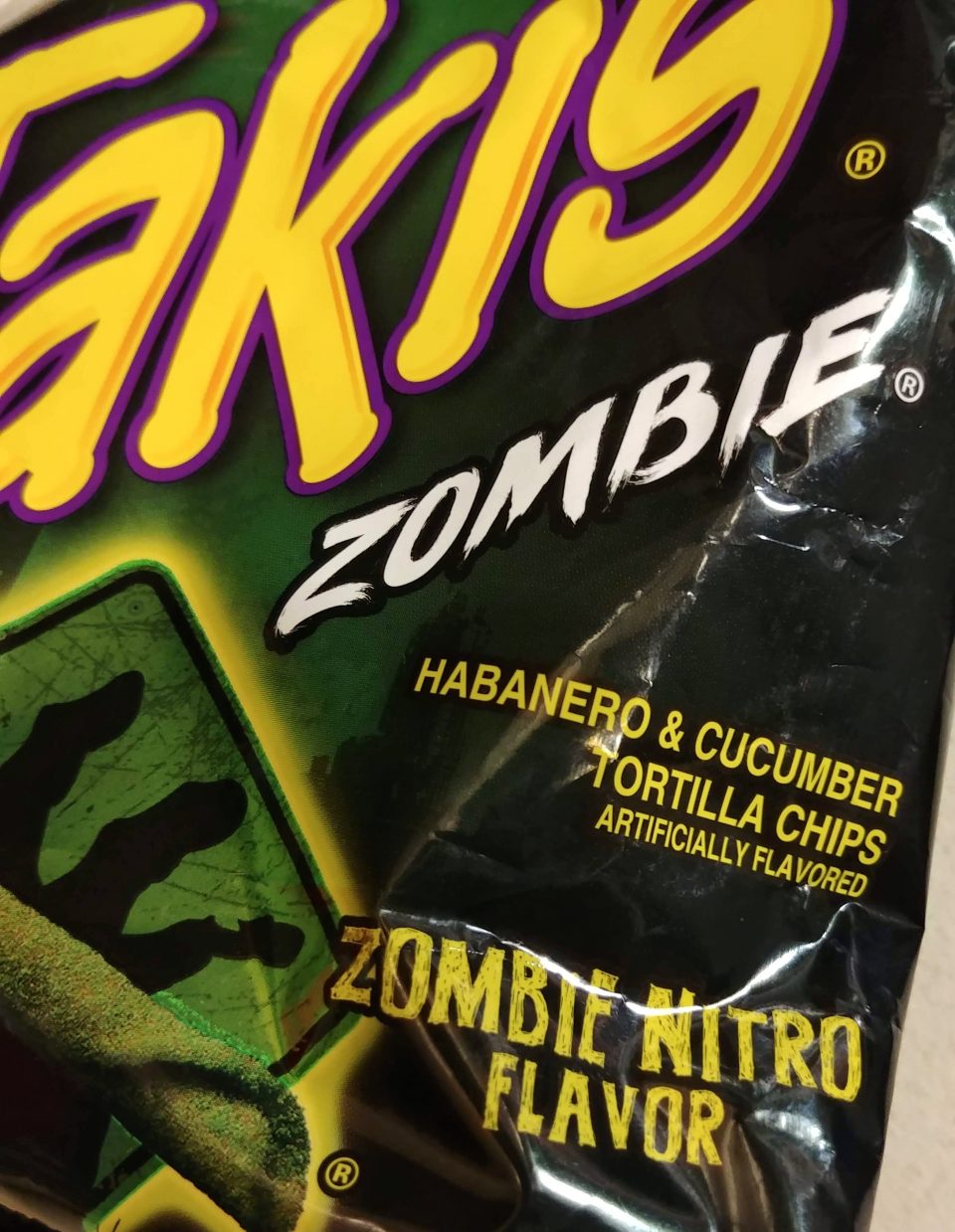 To paraphrase Stephen Colbert, these are like eating habanero Takis downwind from an artificial cucumber flavor factory. Worst than that, it’s not even CLOSE to what a cucumber (artificial or otherwise) tastes like. Perhaps they were shooting for some sort of Zombie Cucumber flavor. One where the cucumber had died, laying around in the street for a bit, then somehow gets reanimated but comes back “not quite right.” Stranger still, as you eat these the Zombie Cucumber “flavor” sort of morphs into a Zombie Lime “flavor.” Again, it’s “not quite right” Zombie Lime.

They have a decent level of spice and the green dusting definitely separates them from your standard Takis varieties. Like the Scorpion BBQ, the green dusting is a limited edition gift that keeps on giving. Eat a full bag of these and you’ll understand what I mean the next day.

Perhaps Cherie’s review of these sums it up best “Huh. OK.”

And not in a good way.