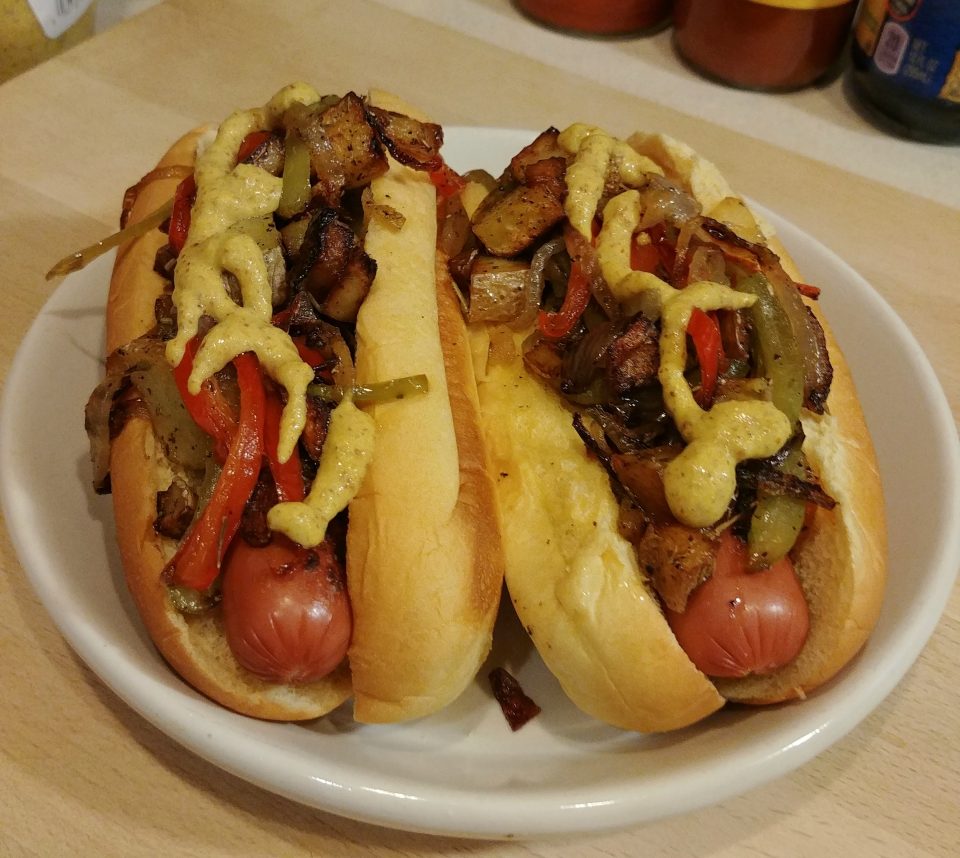 The same year The Beastie Boys released a genre-shifting debut album, across the river in New Jersey, Bon Jovi released one of the greatest albums in Arena Hair Rock History. Either you can embrace the pure party rock Jersey trash joy of Slippery When Wet or you’re dead inside. No, it did not change the course of music history like The Beastie Boys or even fellow Jersey son, Bruce Springsteen. It did spawn a series of house party sing-a-longs/driving with the windows down during summer/lighters held high anthems that – like License To Ill – resonated with the kids of Midwest Suburbia. This was the album that – for better or worse – broke Bon Jovi out of their East Coast/Jersey Turnpike/Mall Hair fanbase and made them Rock Stars. It’s also the only Bon Jovi album I can actually listen to from beginning to end. If It also had “Bad Medicine” it would be the only Bon Jovi anyone would ever need.

As I knew I’d be making a classic New York hot dog for the Music & Food project, it was only fair to represent the land across the Hudson. Perhaps a Springsteen song might have been more appropriate to represent Jersey, but I have always loved the line “I’ve seen a million faces and I’ve rocked them all” for its brilliant absurdity and so went with this Bon Jovi classic.

I have spent very little time visiting New Jersey so the research for this was more “Google Search” than taste testing. At its core, this is sort of a jacked up homefries on a hot dog with mustard. Research turned up a few different methods of potato prep. Some halve the potato and slice thin like chips. Some go more steak fry cut. I went with a diced style leaning fully into that homefries feel. The potato and peppers topping does require a bit of cooking time to get tender, but it’s worth the effort. I stuck with a classic Italian seasoning, but I could definitely see this working with some smoked paprika and a bit of cayenne heat.

Once the potato and peppers topping is ready, the assembly is a breeze. Cook some dogs – place in buns – add a ton of toppings and mustard – eat your hot dog. One deviation from tradition with this recipe, the classic New Jersey Italian Dog is served on sub rolls cut in half. My tests found that to be too much bread. A nice potato bun lightly toasted worked best for me.

Remove the potatoes, which should be partially browned, to a bowl and set aside. Turn the heat to high and add the peppers and onions. Arrange evenly in the pan and cook for 2-3 minutes without touching them. Sprinkle salt over them, then flip and cook for another 2-3 minutes untouched. There should be some browned and even blackened bits here and there. Add the basil, rosemary, thyme, black pepper, and the potatoes to the pan. Stir to combine and cook over medium-high heat until they are soft and nicely browned, about 8-10 minutes.

Toast the buns and set aside. Grill, broil or pan fry the hot dogs until brown and slightly crispy. Spread mustard inside both buns. Place a dog in each bun and top with as much of the potatoes, peppers, and onions as will fit. Add a bit more mustard to finish.