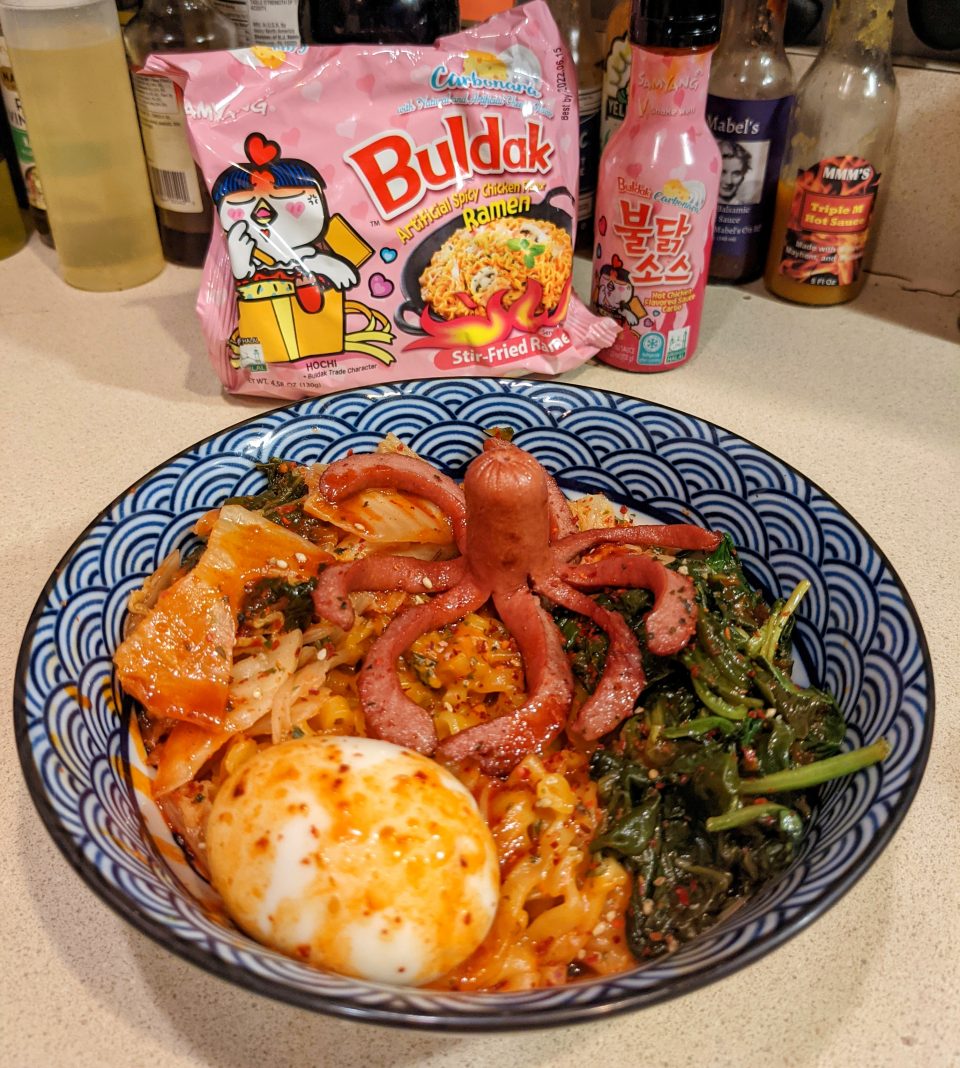 Ahhh, Skid Row. New Jersey’s other less famous hair rock export. Granted, they are perhaps Jersey’s most famous Hair Metal export, but they’ll always be in the shadow of those guys livin’ on their hair. There is something about ’90s Hair Metal that’s “of a time” much like ’90s R&B. Anthemic, bombastic songs designed for arenas even if the bands were playing in bars. Echoes of the sound can be heard in modern rock, but no one does it the way they did back in the day. And few did it better than Skid Row. Their first two albums are brilliant examples of hairspray & spandex wall of sound swagger even as the lyrical content sounds like it was written in high school. Though occasionally, as with the quoted lyric above, they come up with a genius turn of phrase. It’s stupid joyous party rock and there’s absolutely nothing wrong with that.

I’m not completely sure how a ramyun inspired by Squid Game turned into a recipe with a theme from New Jersey’s most famous Hair Metal band, but I’m fairly sure a rhyming dictionary was involved. Honestly, I think the Skid Row inspiration, especially the theme song, works better for this than my original idea. This is the kind of ramyun someone partying to Skid Row would likely make. Actually, it’s more likely the kind of ramyun someone would make after partying with Skid Row. The quoted lyric ties somewhat into the themes of the original Squid Game inspiration while also being a truly great way for a band to get their name into a song.

It all comes down to this. Life is too short for plain instant ramyun. It’s too short not to embrace and enjoy the gleeful party rock of Hair Metal. We all need a little Skid Row in our lives as we eat a big bowl of hot dog squid ramyun. It’s certainly better than playing “Red Light, Green Light.”

Hard boil an egg. Chop the kimchi. Set both aside.

To make the hot dog squid, cut the hot dog in 1/2 starting an inch from one end. Cut the halves in half and then in half again. I found using kitchen scissors was the easiest & cleanest method. Drop the squid in boiling water to curl the legs & then fry in a skillet to brown & crisp up because boiled hot dogs are the devil’s food! LOL Set the squid aside on a plate.

In the same skillet that you fried the squid, heat the veg oil & add the spinach. Wilt and add sesame oil and a sprinkle of gochugaru.

Make the ramyun according to the package but add in the mozzarella with the seasoning & sauce packets.

Arrange noodles in a bowl. Place kimchi, spinach, and egg. Top with squid. Shake the sauce at the bowl like a game of “Red Light, Green Light” and sprinkle a bit of gochugaru to finish.