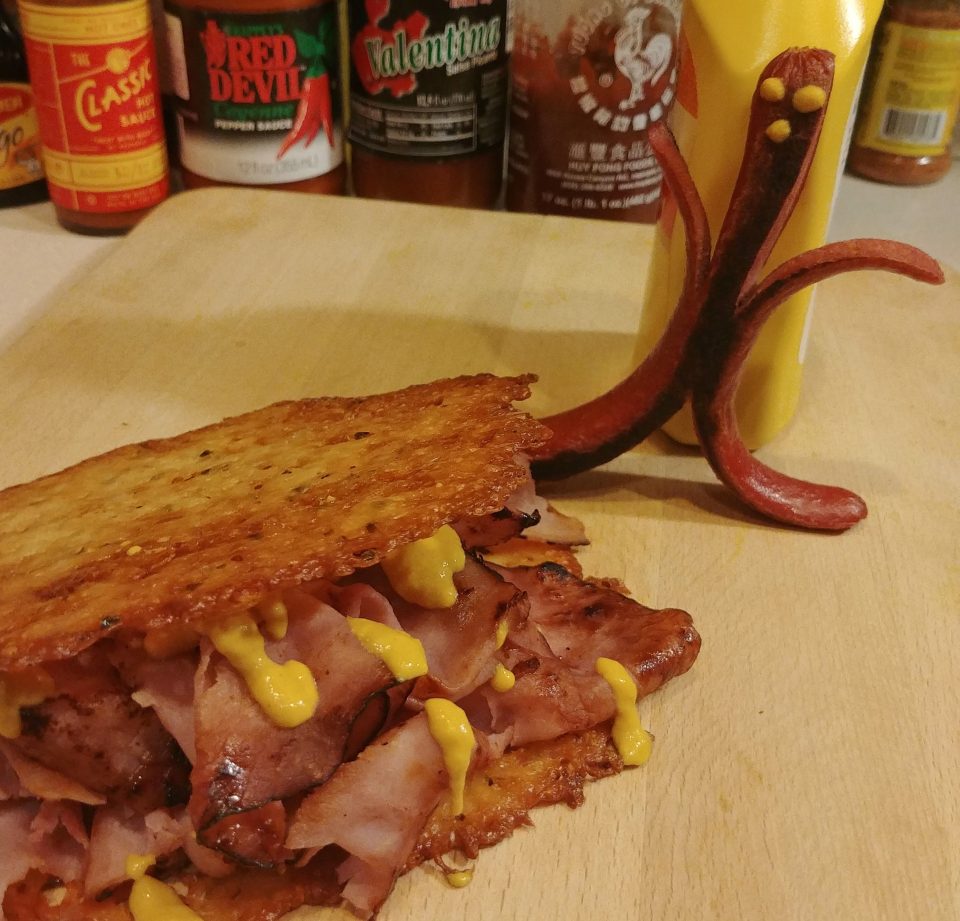 “They’ve been going in and out of style, but they’re guaranteed to raise a smile.”

First, let me start by apologizing to The Beatles for this culinary abomination. Much like Kate Tempest and The Killers, you deserve a better dish. This is, in fact, one of my favorite Beatles songs and albums. I even have a demented affection for the cinematic trainwreck that starred Peter Frampton, the Bee Gees, and so many people who should have known better.

On second thought, this recipe has more in common with Sgt. Pepper’s The Movie than Sgt. Pepper’s The Album. Both this recipe and the movie are well-intentioned tributes to a true musical milestone. Both somehow went way off the rails interpreting an iconic album. Ultimately, both will leave you feeling a little ill for having experienced them.

The inspiration for this horrific Kid’s Keto Menu item actually dates back about a year. I had been finishing up the Music & Food Hot Dog zine and was posting photos of the dogs on Instagram. One of my favorite IG sandwich makers, Chris from Hatewich, made the comment he was looking forward to the “Sgt. Pepper’s Lonely Char Dog with Ham” recipe. While that did not make it into the zine, I stashed the idea in my To-Do list and then promptly forgot about it. Perhaps it should have remained forgotten.

A recent dive into notebooks for new recipe inspiration unearthed this hot dog title and I decided it was time it was made. I was originally planning an actual char dog in a bun topped with ham and pepper jack cheese sauce. Then I started thinking about the lonely char dog in the title. Surely that dog would not be nestled in a bun with toppings. It would be by itself, naked to the world, watching from the sidelines as the rest of the ingredients came together in a dish. It would be a hot dog as a garnish like a meat pickle or beef parsley. The cheese and ham would work together as a unit, perhaps a sandwich, taunting the onlooking hot dog.

As anyone with decent knife skills can replicate this tubular meat iron maiden, I set to work making cuts and testing my Happy Hot Dog Person skills. The first attempt resulted in too small a head segment (yeah – think about that image), and though the legs were a bit wonky with my second attempt, I went with that. The trick is to boil the cut dog for a minute or so to open up the cuts. Then slap that hot dog person on a hot cast-iron and try not to image tiny Hot Dog Person screams as you develop a nice char on both sides. A grill weight is very effective to keep the dog pressed to the hot pan and hiding the sight of a person-like object getting charred.

With the hot dog solved, I started thinking about the pepper jack and ham. I wanted to make a sandwich but didn’t want to add bread to the mix. I thought about possible a cheese & meat platter concept, but that really didn’t fit with the whole Happy Hot Dog Person thing. If this were some sort of creepy kid’s meal item, what would a kid want? Melted cheese, of course. Why stop there? Why not CRISPY melted cheese? A cheese cracker sandwich with a fried ham filling. I mean, we’ve already charred a Hot Dog Person so really there are no rules.

I will say this, the time it will take to make the pepper jack crackers is directly related to the quality of the cheese. I used a fairly cheap variety. After all, why get spendy on something like this? That meant an extended baking time to allow for the moisture and oil to properly evaporate and brown. It was actually worth the effort and probably the only part of this mess I’ll ever use again.

The answer is neither.

The correct way to eat this is to put Lonely Char Dog Monster out of his miserable existence by placing it on top of the ham in the sandwich. Then, finally comforted by the gentle cushion of soft ham and warming comfort of a cheese blanket, it can end its life and relieve your hunger. How you handle your feeling about that is your business. 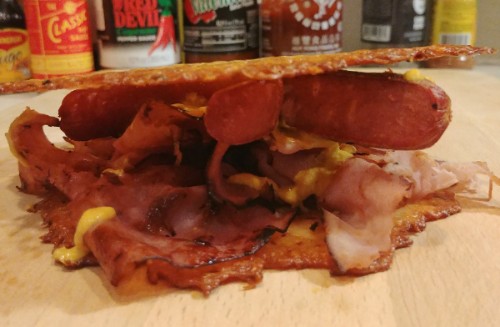 If you want some hot dog recipes that won’t leave you emotionally scarred, I suggest picking up the first issue of Music & Food, I Wanna Be Your Hot Dog.

Preheat your oven to 400°F. Line a baking sheet with a Silpat or parchment paper. Divide the pepper jack into two equal piles. Place each pile on the baking sheet about 2-inches apart. Place in the oven and bake 8-10 minutes depending on the quality of the cheese. Keep an eye on it so it does not burn. When you have melty golden cheese disks, remove them from the oven and let them cool.

Place a cast-iron or non-stick skillet over medium-high heat. Place your Hot Dog Abomination into the pan and use a grill weight or spatula to press it against the pan. When one side is nicely charred, flip The Hot Dog Horror and repeat on the other side. Remove from the pan and set aside. Place the ham in the still-hot pan and quickly fry.

To assemble this Kid’s Menu Terrorfest, draw two eyes and a mouth on The Dog Of Dread and figure out some method to stand him up. I used a mustard bottle, but you could also fashion a brace out of a skewer. Place one pepper jack cracker in front of Mr. Lonely Char Dog, top with ham and mustard, and finish with the other cheese crisp. Take a step back and think carefully about what it is in your life that brought you to this moment.