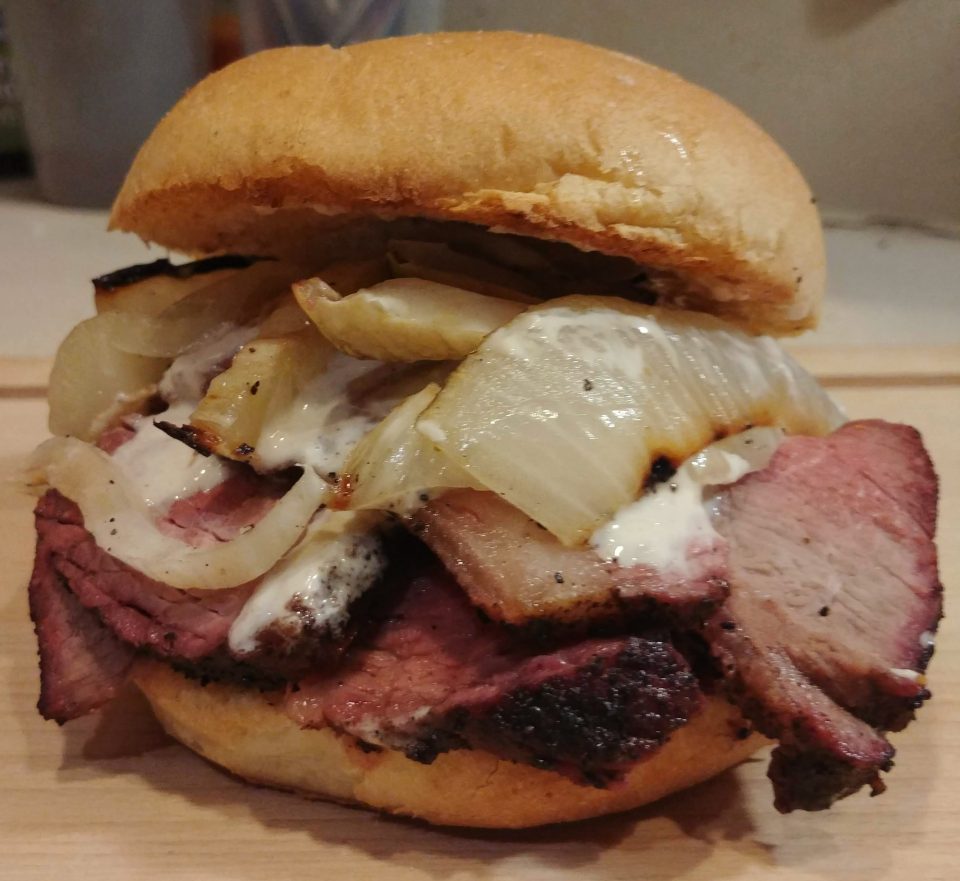 “There will be an answer, let it be”

I understand, as someone with a deep love for and long history with recorded music, I am supposed to revere the genius of Lennon-McCartney and The Beatles. They shaped music history. They were (and perhaps still are) one of the most popular bands on earth. They inspired and influenced countless bands. They gave us the trippy genius that is the Yellow Submarine film. Yet, to be totally honest, I think they’re just ok. I owned The White Album, Sgt. Pepper’s, and the two Greatest Hits but definitely listened to those far less than my Who albums. I appreciate the significance of the Let It Be album, but in my opinion, it’s one of their weakest.

This is my version of Baltimore Pit Beef, a Maryland BBQ style cooked over open hardwood charcoal pits or grills. Traditional pit beef is made with bottom round beef roasts seasoned with a paprika rub. The pit temperature is usually around 400°F – 500°F, much higher than traditional Texas beef BBQ. The result is a spicy outer crust and tender, slightly smokey roast beef. It’s then sliced to order, piled on a kaiser roll or white bread, and topped with spicy horseradish sauce and maybe white onions.

I swap the paprika rub for the Java Jive rub I created at Cha Cha Hut BBQ. The coffee and cinnamon create a deep slightly spicy and earthy crust. It’s the rub I use for any beef on the grill. Using a two-zone fire allows me to start by searing the roast over direct heat, then move it over to the cool zone to slowly roast. While it’s roasting, I grill some sweet onion and fennel to use as a topping. I love the combination of onion and fennel on this sandwich. It adds a layer of sweetness and goes great with the horseradish sauce.

I feel there is WAY too much focus on brisket when talking beef BBQ. I mean, seriously, who has the freaking time to devote 14-20 hours in the backyard just to make dinner? Even when I was doing BBQ professionally, I dreaded the time involved. Pit beef, and its West Coast cousin Santa Ana Tri-tip, offer a way to make a delicious pit-roasted meal without a full day’s commitment. BBQ purists might say this is “grilling” not real BBQ, but they can suck it! This is a simply delicious way to prepare beef in your backyard.

Set up a charcoal grill for a two-zone fire by placing all of the coals on one side of the grill leaving the other as a cool zone. If using a gas grill, set half the grill to medium-high heat.

Lightly coat the beef roast with olive oil and season liberally with the Java Jive rub. Set aside.

Peel the onion and cut it horizontally into two or three thick slices. Place the slices on skewers. Trim the bottom off of the fennel bulb and split it in half vertically. Drizzle olive oil on both sides of the onion and fennel. Season with salt and pepper. Set aside.

When the grill is at 400°F, place the roast over the direct heat and sear each side for 4 to 5 minutes.

Once seared, move the roast to the cool side, and place the fennel and onion on the hot side. Cover the grill and allow the roast to cook for about 1 hour for a medium-rare 2-3 lb. roast. The temperature of the grill should be around 350°F.

After 5 minutes, check the onion and fennel. You want to get them caramelized but not burnt. When one side is done, flip them to the other side and place the lid back on the grill. Check again after 5 minutes. When the fennel and onions have finished, remove them from the grill and cover them with foil on a plate.

After about 45 minutes, check the roast temperature with a thermometer. You are looking for a temperature of 130°F. Be sure to check for doneness often because timing can vary depending on the roast size and heat of the grill. When this temperature is reached, remove the roast from the grill and allowed it to rest for 15 minutes before carving.

Once the roast has rested, toast a roll on the grill. Separate the grilled onions into rings. Slice fennel into 1/4 inch pieces. Slice the beef as thinly as possible. Spread a tablespoon of horsey sauce on the bottom bun. Pile on some beef. I recommend about 6-ounces per sandwich. Top with a drizzle of horsey sauce, grilled onions and fennel, and the top bun.

Combine all ingredients thoroughly in a medium bowl. Store in an airtight container.

HORSEY SAUCE
Makes about a half cup

Place the ingredients in a medium bowl and whisk to thoroughly combine. Place in an airtight container and store in the fridge to let the flavors meld.