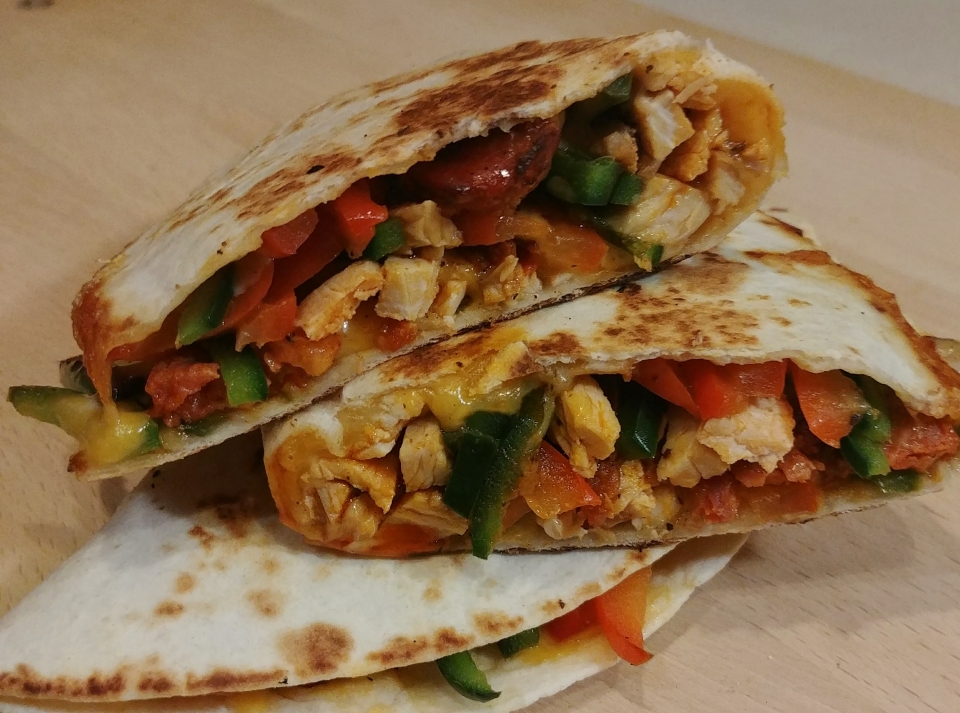 This is one of those dishes where the name came first.

I was feeling lazy one night, hungry for grilled cheese but not wanting to go through the steps necessary to make grilled cheese. Yes, I know there are not a lot of steps to grilled cheese, but there are even fewer steps for a quesadilla. Shred cheese – fold cheese in a tortilla – toast each side of the tortilla in a pan – eat your lazy dinner. As I was eating the results, I got to thinking:

Despite my Detroit roots, I had not really known much about J. Dilla prior to watching Our Vinyl Weighs A Ton: This Is Stones Throw Records. I knew the name but never did that deep dive into the crates. Hearing his tracks was a revelation – the exact sort of laid back jazz-soul hip hop I gravitate to. Real nod your head stuff where often his instrumental tracks are more interesting than the vocal productions. Flash-forward to now – Dilla is still heavy in my rotation but so is the work of those he directly influenced. I can’t think of a producer more responsible for the new Lo-Fi Music movement than J.Dilla.

So it was clear I needed to make a proper quesadilla dish, with some actual effort, to honor one of the greatest producers in Detroit’s history.

I’ve recently been cooking mostly plant-based recipes, but I wanted this to be a bit more main course, not an appetizer. That meant adding a meat element – actually it meant adding two. The local supermarket was having a sale on chorizo so I started with that. I then grabbed a bit of roasted chicken from the fridge. Creating a spicy meat filling is a simple as starting with the chorizo in a hot pan, letting it render completely releasing spice-laced fatty goodness, then adding in the cooked chicken and tossing to coat and reheat. Once cooked, transfer to a paper towel-lined plate to soak up any extra chorizo fat. A quick round of sauteed peppers and you’re all set to assemble.

I keep my quesadillas simple: cheese, vegetables, and sometimes meat. No salsa or guacamole or sour cream. Stuff a tortilla with the fillings – fold and press closed – place in a hot skillet to toast and melt the cheese. It’s the easiest way to make a grilled cheese sandwich when you’re too lazy to spread butter.

In a skillet over medium-high heat, heat oil then add peppers. Cook 3-4 minutes until peppers are tender but still crisp. Do not let them get mushy. Transfer to a plate and set aside.

Put the chorizo in the hot skillet and cook until it browns and the fat renders. Add the cooked chicken and saute for another 2 minutes to reheat the chicken and coat it with chorizo fat. Transfer to a plate lined with a paper towel.

Assemble the quesadilla by dividing the cheese between the tortillas. Top the cheese with the peppers and meat. Fold in half and press to seal.

Lower the heat to medium. Wipe out the skillet and add 1/2 tablespoon of olive oil to coat. Place the tortillas, two at a time, in the skillet to toast and get the cheese melted. Cook about 1-2 minutes per side taking care not to burn.

Cut the tortillas in half to serve. These don’t need a topping but you could add pico de gallo, sour cream, and hot sauce. I don’t add anything, but you do you.