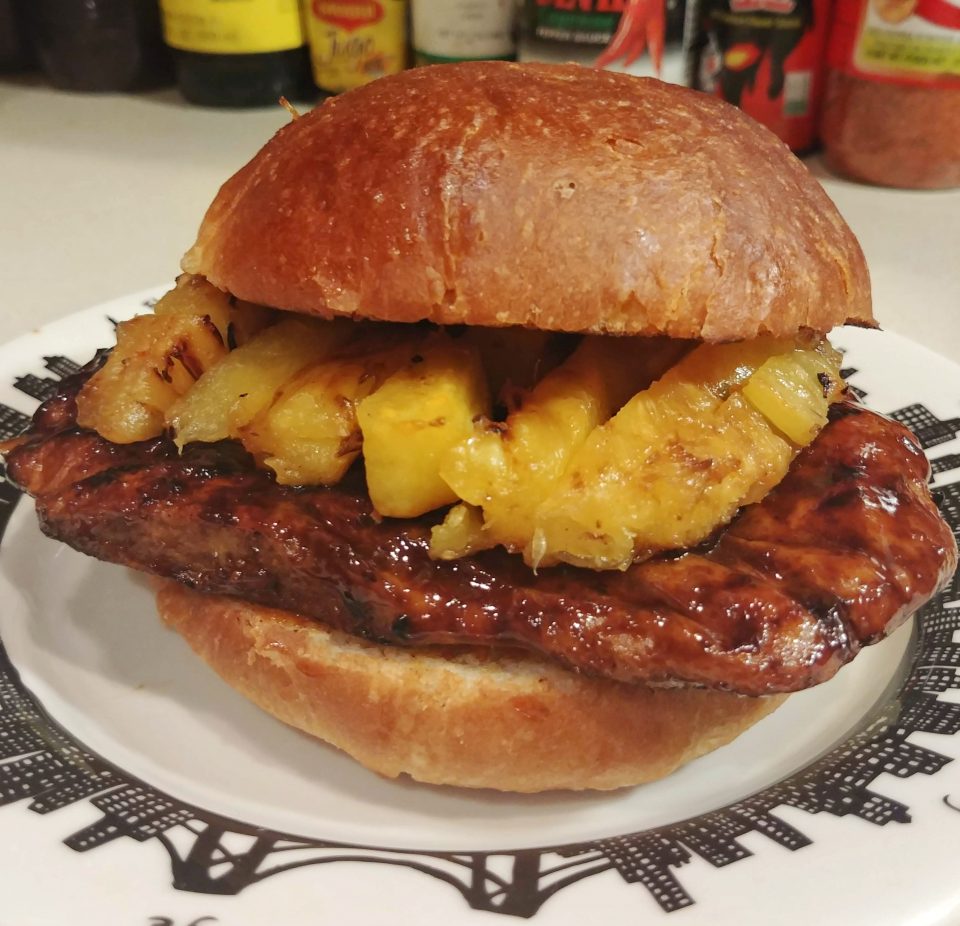 “I’ve always been the one to blame for everything I long to do.”

I spent almost two decades in the music biz before getting into cooking. I saw many great concerts and a handful of legendary concerts. The Pet Shop Boys’ 1991 Performance Tour still ranks as perhaps the best show I have ever seen. Part concert, part Broadway show, part performance art. It was pure spectacle and made me a career-long PSB fan. While I dig where they went in later years, the music PSB released in the late ’80s and early ’90s is definitely my favorite. Many moments in my life can be summed up with “What’ve I, what’ve I, what’ve I done to deserve this?” Many many more can be summed up with “Everything I’ve ever done. Everything I ever do. Every place I’ve ever been. Everywhere I’m going to. It’s a sin.” And so, when it came time to make a hoisin sandwich, the theme song was easy.

Sometimes less is more. This is a brilliantly simple but satisfying sandwich. Three ingredients though one ingredient does have a bit of prep time. I definitely prefer the hoisin cutlet grilled but a skillet will do in a pinch. Sweet, savory, sticky, and slightly messy. Exactly the sort of sandwich you need when feeling a bit sinful.

If grilling, set up a two-zone fire with either 3/4 can of charcoal or a gas grill on medium heat. Alternately, you can cook these on the stove with a cast iron or non-stick skillet. Remove the chickwheat from the marinade and let rest at room temperature. Reserve the marinade to glaze the chickwheat.

Brush the cutlets with the marinade. Cook 2-3 minutes to sear, then flip. Brush the seared side with marinade and cook for 2 minutes. Once both sides have been seared, move to the indirect heat side and continue glazing and flipping every 2 minutes until a thick caramelized coating is created. You want these cutlets to be really sticky and glazed.

To cook the cutlets and pineapple in a skillet
Heat 1 tablespoon of vegetable oil in a cast iron or non-stick skillet. Add the pineapple and cook until lightly charred and caramelized. Flip and continue cooking until caramelized. Transfer to a plate and set aside.

Blend everything up to cider vinegar in a food processor until completely smooth. Combine with vital wheat gluten in a bowl, mixing completely, and let rest for 15 minutes.

Split the dough in half. Place a dough ball in the food processor and let it knead until the dough is warm, stretchy, and smooth about 6 minutes. Repeat with the other ball.

Split the two balls into thirds and form cutlets. Wrap in foil and steam for 1 hour 15 minutes. Let the cutlets cool before using them.

Mix the marinade in a medium bowl. Place 4 cutlets in a ziplock bag and pour in the marinade. Toss to coat the cutlets. Marinate for at least 4 hours or overnight.