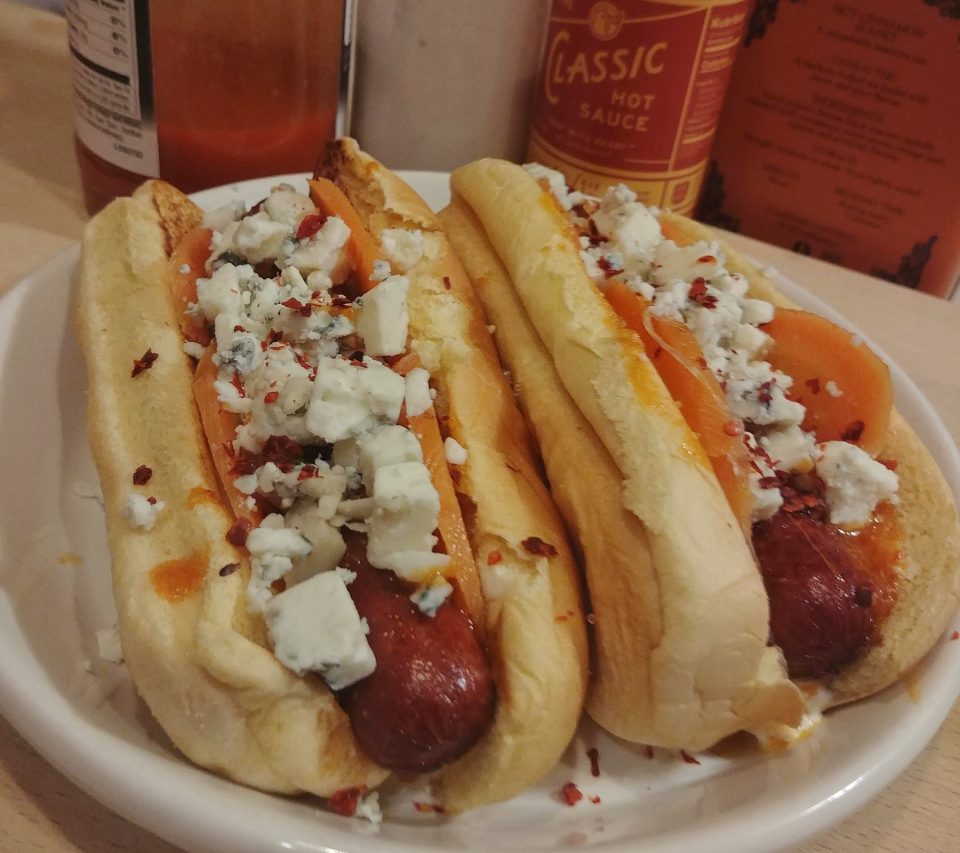 “I’ll give you love baby, not romance”

Once upon a time, way back in the late ’80s, Hip House was born. Also known as Rap House or House Rap, it was a blending of the new house music scene with the old school rap scene. It gained a base in Chicago, New York, and especially the U.K. While Neneh Cherry was never a hip house artist per se, I’ll argue her Bomb The Bass produced “Buffalo Stance” is a classic of the genre. More importantly,  Cherry’s Raw Like Sushi debut, like Queen Latifah’s All Hail The Queen, was essential to opening the musical doors to a future of successful, consciousness-raising female hip hop/dance artists.

By the way, according to Wikipedia, a “Buffalo Stance” is standing like a person who is, or a group of people who are, posing for a photo shoot in a fashion magazine.

What happens if you give a hot dog the buffalo wing treatment? You get a pretty damn tasty dog. Let’s get the major controversy out of the way right off. Despite my Midwest upbringing, I am 100% Team Blue Cheese when it comes to Buffalo Wings. Ranch dressing has its place on salads, sandwiches, and pizzas, but not with wings. This dog gets a double hit of blue cheese with dressing on the bun and crumbles on top. Sure you could use Ranch for this dog, but you’d be doing it wrong.

I had planned to make a carrot celery slaw as a topping, but the tests were disappointing. I wanted to keep the crudite element but wanted something that would not get lost in the hot sauce and blue cheese mix. My current obsession is Mexican carrot pickles so I went with those. They add just the right amount of bright floral acidness to counteract the blue cheese funk and cayenne heat.

One final twist to this recipe is a deep fried dog. I am not a major fan of home deep frying. I got spoiled in commercial kitchens with big ass fryers and a line cook I could make clean the grease. I do think this recipe benefits from a deep fried dog. You get the sort of snappy crunchiness associated with wings along with that deep-fried flavor. If I were to revise this in any way, I might experiment with breading the dog before frying to get even closer to wing territory.

Then again, I could just shove a deep fried chicken tender in a hot dog bun, top it, and call it a day.

Toast the buns and set aside. Heat an inch of oil in a heavy bottom pot. When the oil reaches 300°F, carefully place the hot dogs in the hot oil. Let them cook – occasionally rotating them with tongs – until they get dark red and start to split open. Remove from oil and let rest on paper towels to soak up excess oil.

BLUE CHEESE DRESSING
Makes about a half cup

Place sour cream, mayo, vinegar, and blue cheese in a medium bowl. Stir until thoroughly combined. If the dressing has a dip-like thickness, add a touch of water to thin into a dressing.

BUFFALO SAUCE
Makes about a cup

Combine all ingredients in a bowl and whisk until thoroughly combined.

Place garlic, vinegar, water, peppercorns, oregano and salt in a saucepan. Bring to a boil. Add the carrots, onion, and jalapeno. Reduce heat and simmer 15 minutes. Let it cool completely in the pan on the stove. Once cool, transfer to an airtight container and store in the refrigerator.