Beat On The Bratwurst 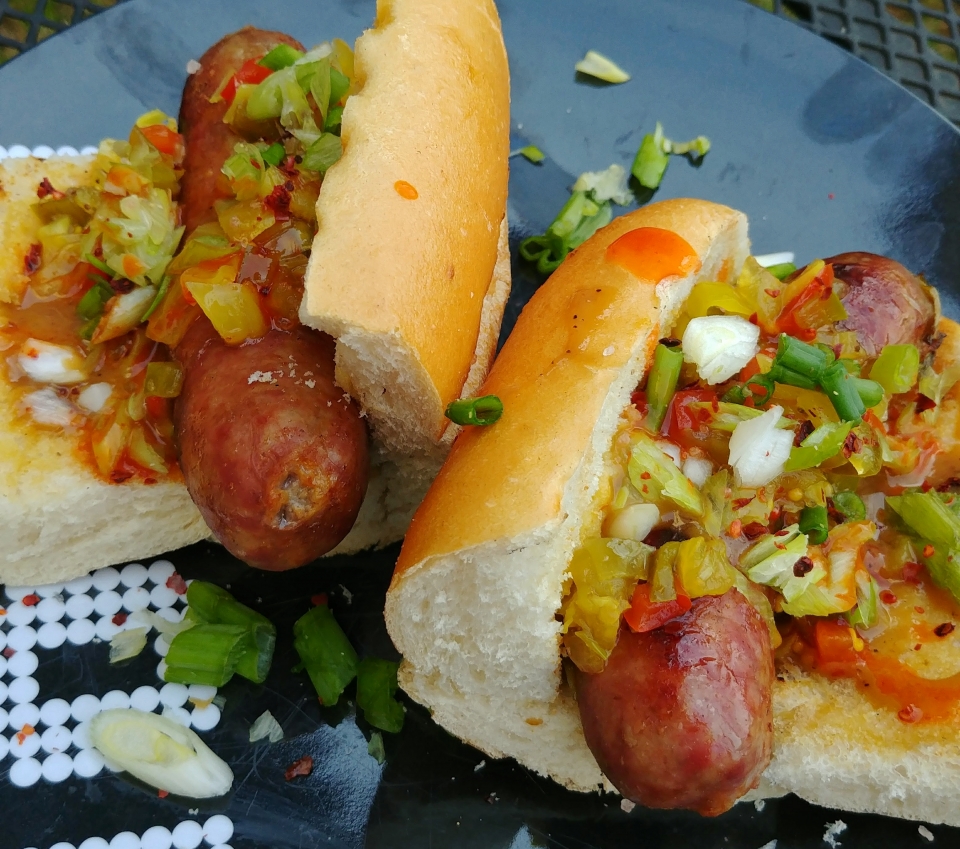 Yes, I know technically this dish would be a better pun if I used a beet relish and called it “Beets On The Brat”, but I cannot tolerate beets in any form.

The Ramones are one of those bands I’ve always loved, but really never collected. I think I may have only owned End Of The Century. While the Phil Spector production on that album was an interesting experiment for the band, it definitely is not one of their best. I think I bought it for “Do You Remember Rock And Roll Radio” which played often on my local FM station. Regardless of never actually owning Ramones albums, I am definitely a fan. With the advent of digital music & Spotify, The Ramones are a regular soundtrack for cooking or backyard grilling. It’s virtually impossible to not have a great time when listening to them.

So on the first warm day at BGC HQ, I had the desire to put The Ramones on the stereo,  fire up the grill, and chill out in my Brooklyn backyard. Once upon a time, the temperature was not a factor in my grilling plans. I’ve grilled in sub-zero weather while it snowed sideways. I took quite a bit of pride in my all-weather grilling.  Those days, however, are long gone. Now I prefer warm-ish temps with a slight breeze and blue skies where I can kick back with a nice drink and listen to music while my Weber Kettle does its thing.

The first thing you may notice about this recipe is the lack of beer. I was taking a break from drinking and chose to come up with a beer free brat cook. Yes, this is borderline heresy in some parts of the U.S., but I believe the vegetable stock braising liquid actually imparts far more flavor than beer.

Other than the lack of beer, this is a straightforward grilled brat recipe. As I had been doing test kitchens for the Cha Cha Hut BBQ Cookbook, I happened to have a batch of Tomatillo Chow in the fridge. I honestly prefer it to a pickle relish or the usual kraut/onion/peppers. It adds a nice sweet and sour crunch layer to the sandwich. Some standard spicy mustard, Red Devil Hot sauce, and a few chopped scallions pull it all together. I put a bit of butter and garlic powder on the buns, in this case, cut to brat size sub rolls, before toasting on the grill.

This is summer on a bun. Granted, this recipe can easily be accomplished in the kitchen. You could oven-braise the bratwurst at 350°F then crisp in a hot skillet. It will taste great. Honestly, though, it will taste that much better when you’re kicking back in the sun, the smell of charcoal and sausage in the air, and The Ramones on the stereo.

Combine vegetable stock, mustard, and hot sauce in a bowl. Whisk until thoroughly combined. Pour 1/2 cup in the bottom of a foil pan. Place bratwurst in the pan. Pour remaining liquid over bratwurst. Top with chopped scallion.

Light one chimney full of charcoal. When all charcoal is lit and covered with gray ash, pour out and arrange coals on one side of the charcoal grate. Set cooking grate in place, cover grill, and allow to preheat for 5 minutes. Alternatively, set half the burners on a gas grill to the highest heat setting, cover, and preheat for 10 minutes. Clean and oil grilling grate.

Place the pan of bratwurst on the hot side of the grill and let simmer for 5 minutes. Move pan to the cool side of the grill, cover with vent holes over the bratwurst, and cook until internal temperature is 140° – 145°F about 20 minutes turning bratwurst halfway through cooking.

Using tongs, remove bratwurst from the pan and place them on the hot side of the grill. Cook, turning occasionally, until crisp and browned about 4 minutes. Remove from the grill to a plate and cover with foil.

Spread butter on the inside of each brat roll. Sprinkle with a bit of garlic powder. Place the rolls butter side down on the grill until toasted.

To assemble the sandwich, drizzle mustard inside the roll on each side. Using tongs, place bratwurst on the roll. Top with some Tomatillo chow and scalli0ns. Finish with a few dashes of hot sauce and a sprinkle of sea salt and Aleppo pepper.

Place all of the vegetables in a large bowl and mix with the kosher salt. Cover and let sit at least 2 hours.

In a large heavy pot, combine the brine ingredients whisking until sugar has dissolved. Drain and rinse the vegetables and add them to the pot. Stir to completely combine vegetables and brine.

Bring to a boil over medium-high heat. Reduce heat and simmer for 1 hour. Let relish cool and pour into a clean airtight container. Store in the refrigerator.