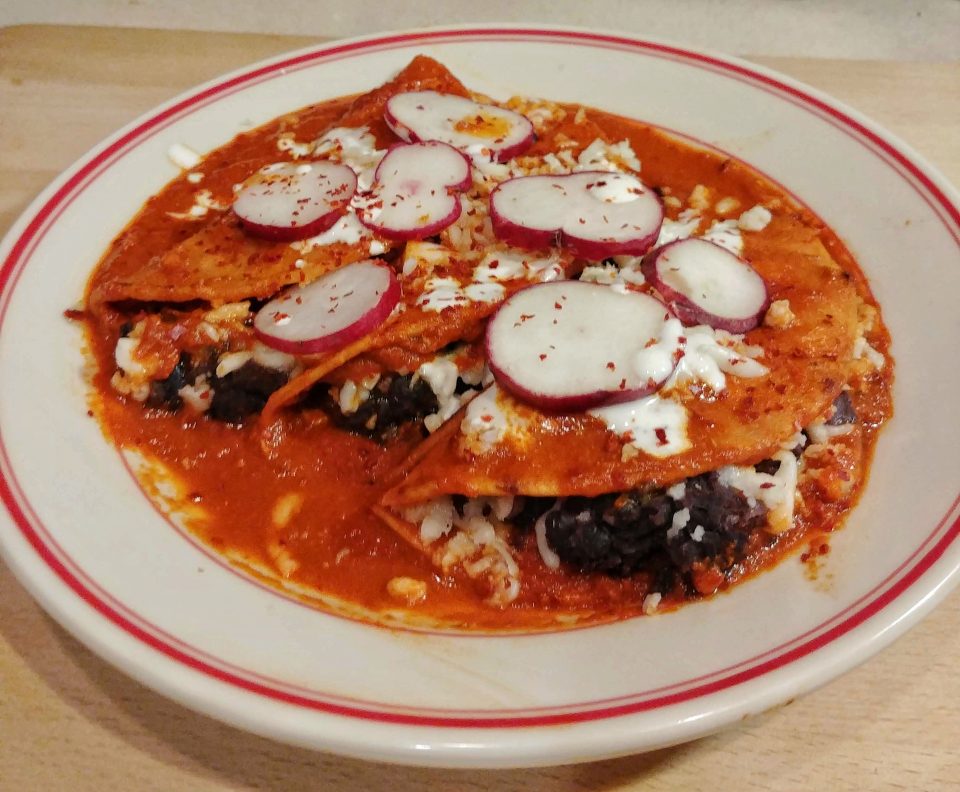 “”If you´re not into yoga; if you have half a brain”

Truth be told, I actually don’t like bean enchiladas. I don’t HATE them but I never order them and rarely cook them. I prefer a burrito, which essentially is an enchilada minus the sauce. I make burritos and tacos (a burrito that is not folded up) on a regular basis, but this is the first plate of enchiladas I’ve made in years.

So why an enchiladas recipe?

Mostly because in researching Music & Food recipes I came across a link to Meriwether’s Mistaken Lyrics pint glass series. The name of this recipe is a misheard lyric from this Rupert Holmes hit. It’s a masterpiece of ’70s cheesiness that appears to be about a guy answering a personal ad looking for a soulmate to share coconut-based cocktails. Ignore that glossy Yacht Rock pop for a minute, and REALLY listen to the lyrics. It’s the twisted tale of a fucked-up relationship that, while ultimately having a gee-gosh-golly happy ending lyrically, likely actually ended in a murder-suicide. To say this song’s storyline has some serious thematic issues would be an understatement.

This was originally a baked with cheese style which honestly is likely the reason I generally dislike enchiladas. The baked version is a usually mushy gloopy mess. This version ditches the baking, ups the texture with fried tortillas, and still keeps the cheese in the mix. You can make this vegan by using vegan mozzarella (which I am convinced does not really exist) and making some lime cashew crema (see recipe below).

Remove the stems from the dried chiles. Toast the chiles on a cast iron pan until fragrant. Place the toasted chiles in a heat-proof bowl and cover with boiling water. Let them soak for at least 15 minutes.

In a blender, add the hydrated chiles, garlic, onion, oregano, salt, and some of the chile water. Blend the chiles until smooth. Add more water as needed. The sauce should be fairly thin.

In a pan over medium heat, add 2 tablespoons of oil and coat the pan. Add the sauce and turn the heat to low. Fry the sauce for 10 minutes.

Take the plate you plan to serve your enchiladas on and spread a tablespoon or two of sauce on the plate. This will be the base for constructing your dish.

To serve, cover the enchiladas with additional sauce and add lime sour cream and some radish slices.

NOTE: Mexican Oregano can be found at most specialty spice stores and Latin markets. It has a more grassy, minty flavor than Italian oregano. If you can’t find Mexican Oregano, you can substitute Italian Oregano.

Heat oil in a medium frying pan over medium heat until shimmering, about 2 minutes. Add onion, garlic, and salt and cook, stirring constantly, until vegetables are soft and just beginning to brown, about 3-4 minutes.

Add half of the beans (1 1/2 cups) and mash completely with a potato masher or the back of a wooden spoon. Add remaining 1 1/2 cups of beans and mash, leaving about half of the beans intact, or whatever strikes your personal texture fancy. Add the cumin, lime juice, and Maggi (if using) and mix thoroughly into the beans. Continue cooking, stirring constantly, until the bean starches begin to coat the bottom of the pan and turn golden brown, about 3 minutes.

Add bean liquid or vegetable stock, bring to a simmer, and cook, stirring and scraping the bottom of the pan to incorporate the water and heat the beans through, about 2 minutes. .The beans may initially look soupy, but they’ll thicken as they cool, so be sure to add all of the stock or bean liquid.

Combine sour cream, lime juice, and black pepper in a bowl. Whisk to thoroughly mix. Store in the fridge in an airtight container.

CASHEW CREMA
Makes about a pint

Soak the cashews in water for 4-6 hours. Drain the cashews and add them to a blender along with the lime juice, apple cider vinegar, salt, and water.