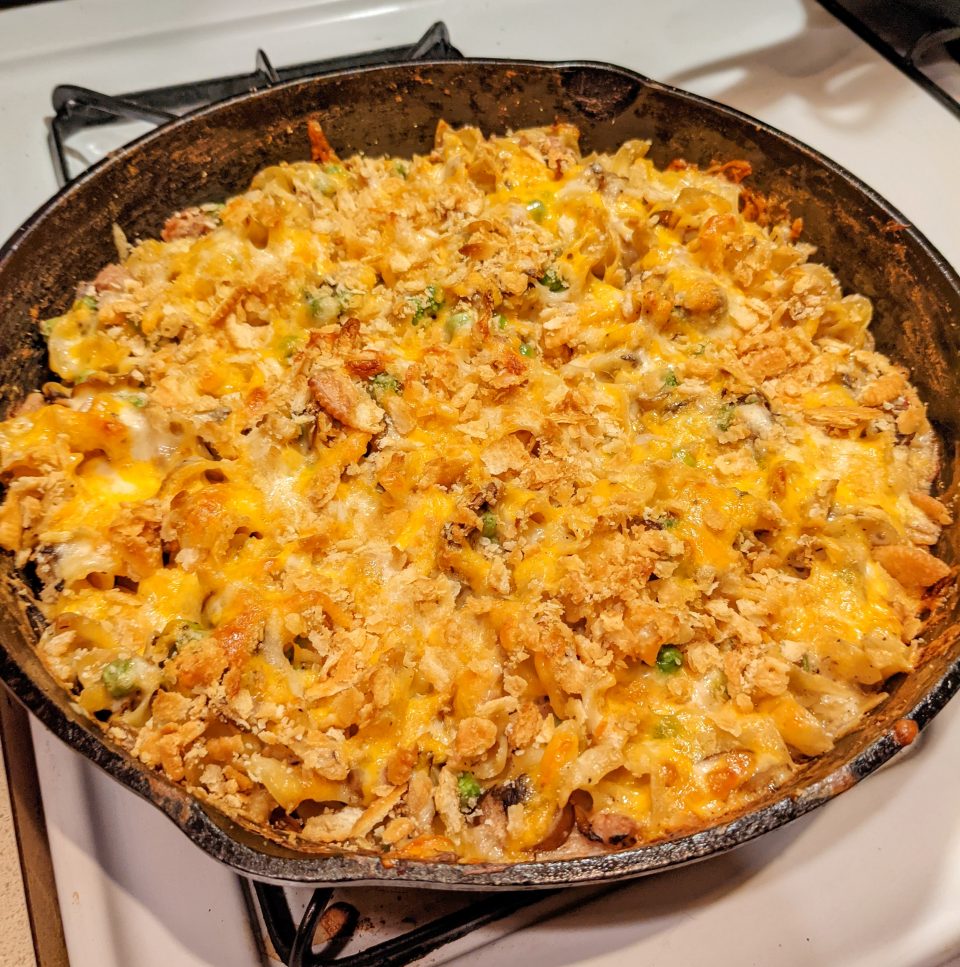 Ahh, Florida, why you gotta be like that? I kinda marginally hate myself for this recipe pun, but I’m still going to defend the stupid rap-rock of Mr. Durst & Co. This is “testosterone party rock” targeted at a certain type of music-buying public who believe backward caps, tank tops, and Entourage are an actual lifestyle. It’s easy to dismiss as musclehead idiot crap, but stop for a minute and actually listen. Not to the lyrics because, yeah, they are awful, but the music. The theme song here is a monster power riff. The same goes for “Nookie,” the only other Limp Bizkit song I dig. Limp Bizkit suffers from the clown-like frontman and 13-year-old child lyrics of Fred Durst while the true stars are behind that sub-par Turtle vocalist. Wes Borland is a woefully underappreciated modern rock guitarist and DJ Lethal pioneered “DJ as part of a rock band.” To appreciate Limp Bizkit, simply ignore Fred Durst.

This is a nostalgia re-invented recipe. I grew up on tuna casserole, but that usually included a certain condensed soup brand’s “mushroom soup.” I don’t cook with canned soup, so that sent me on a mission to find a way to make childhood memories with real ingredients. The results ended up, unintentionally, being a one-skillet recipe.

Set your oven to 375 degrees. You can bake this casserole right in the skillet or coat a 2-quart baking dish with non-stick spray for baking later.

Bring a large pot of water to a boil over high heat. Add one teaspoon of the salt, followed by the noodles. Reduce the heat to medium and cook until the noodles are just tender about 7 minutes. Drain and set aside.

Heat the olive oil in a large oven-safe skillet over medium-high heat. (If you don’t have an oven-safe frying pan, use a regular one and bake in a 2-quart baking dish.) Add the mushrooms and cook until they release their juices and get golden and slightly crispy. Reduce heat to medium and add the butter.  Add the flour and cook until it smells toasted about 2 minutes. Whisk in the broth and milk. Add the onion powder, garlic powder, salt, and pepper and cook, stirring occasionally, until thickened, about 5-7 minutes.

Remove the sauce from the heat. Add the peas, noodles, and tuna, and fold them in with a spatula. Sprinkle with the cheese, followed by the cracker crumbs. Bake until bubbly, the cheese is melted, and the crackers are golden-brown, 15 to 18 minutes.

Let the casserole cool 5 minutes before serving — this will allow the sauce to thicken slightly.