Edamame Said Knock You Out 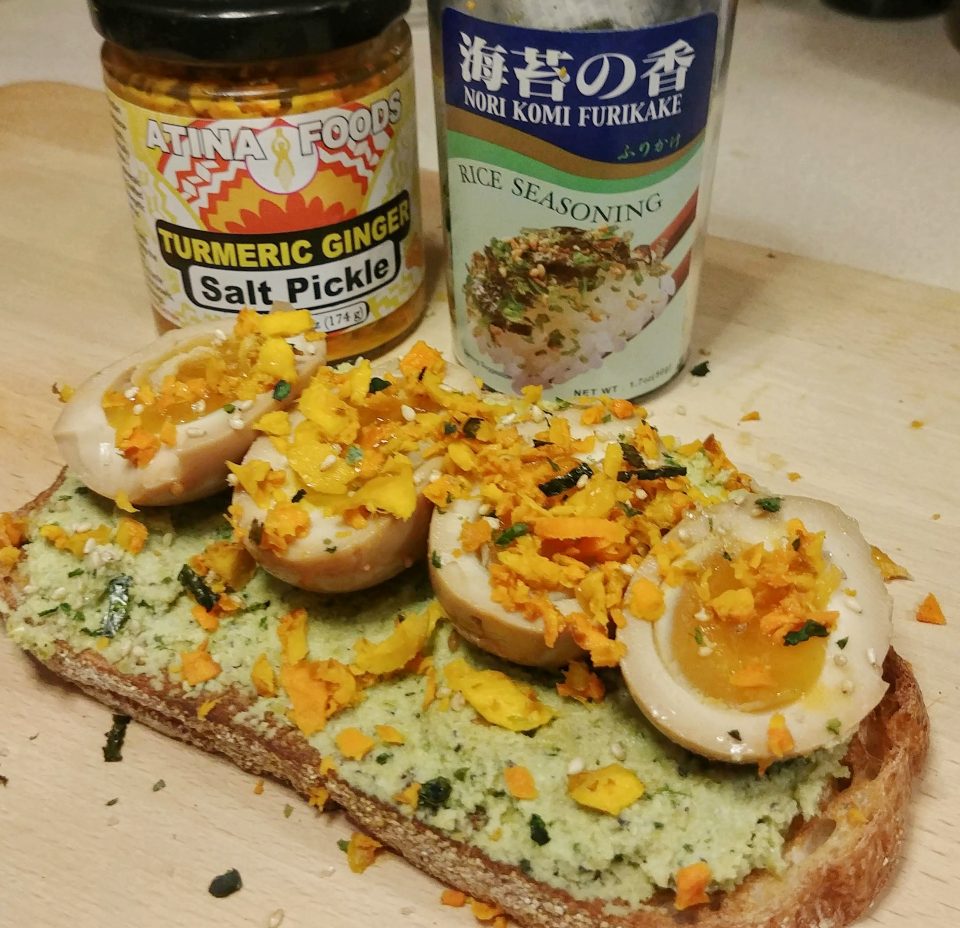 “Don’t you call this a regular jam”

The second appearance of an LL Cool J track is also the second hip-hop-inspired answer to the most dreadful brunch item ever, Avocado Toast.

To be fair, that first LL Cool J track, “Going Back To Cali”, is my favorite. This is is a very close second. Released as part of a most likely manufactured rap rivalry with Kool Moe Dee, it’s a classic old school brag & diss rap best played at maximum volume. While I am more of an LL than Kool Moe fan, I feel both landed solid tracks in the battle with this being LL’s best and Kool Moe Dee crushing it on “How You Like Me Now?” All in all, these tracks remind me of just how far hip-hop has fallen, especially lyrically, over the years.

As I previously stated in the Toastface Killah article, I refuse to ever make Avocado Toast and feel it is just a lazy cook’s way of doing brunch. For that recipe, I tossed the green stuff out the window and attempted something more like an appetizer course. This time, I wanted to give those Avo fans a green brunch, but skip the incredible cliche and wicked expensive avocado.

The answer was to go vaguely Asian, and yeah this might be cultural appropriate but probably definitely isn’t.

It turns out if you process cooked and shelled edamame like you are making guacamole, you get a very bright and flavorful spread that tastes nothing like guac but works brilliantly as an avo toast substitute. Spread it on a nicely toasted piece of sourdough and you have a quick handheld breakfast while rushing off to your busy day.

But what if you want more of a meal?

The answer came while binging Korean food videos on YouTube. Mayak Egg, or Korean Drug Egg, is a sweet-salty-spicy marinated jammy egg. Think Ramen eggs kicked up a notch. I took a few liberties like subbing Sambal Oelek for chili peppers and adding a bit of maple syrup. These eggs make this a plan in advance dish as you’ll need a day of soaking to get the eggs nice and seasoned. Two eggs, sliced in half, fit nicely on the toast and added an extra savory level.

I still felt ir was missing something, so headed to the fridge for some Turmeric Ginger salt pickles from Atina Foods. By using salt rather than vinegar, this is a Lacto-fermented pickle and brings a bright punch of turmeric and ginger to the toast. Finally, a sprinkle of my new favorite seasoning, furikake, and you have a brunch item sure to knock out any overplayed avo pretender.

Toast the sourdough. Spread a generous amount of the edamame guac on one side. Slice two Mayak eggs in half and place on top of the guac. Sprinkle with pickled turmeric ginger and furikake.

Make 6 1/2 minute soft-boiled eggs. When eggs are done, place them in an ice bath to stop cooking.

While eggs are cooking, combine all marinade ingredients. Once eggs have cooled, peel and place them in a deep container (like a quart container). Pour marinade over them. Let soak at least one day.

Pulse the onion in a blender or a food processor for a few seconds. Then add the rest of the ingredients and pulse until the edamame is blended into big chunks.