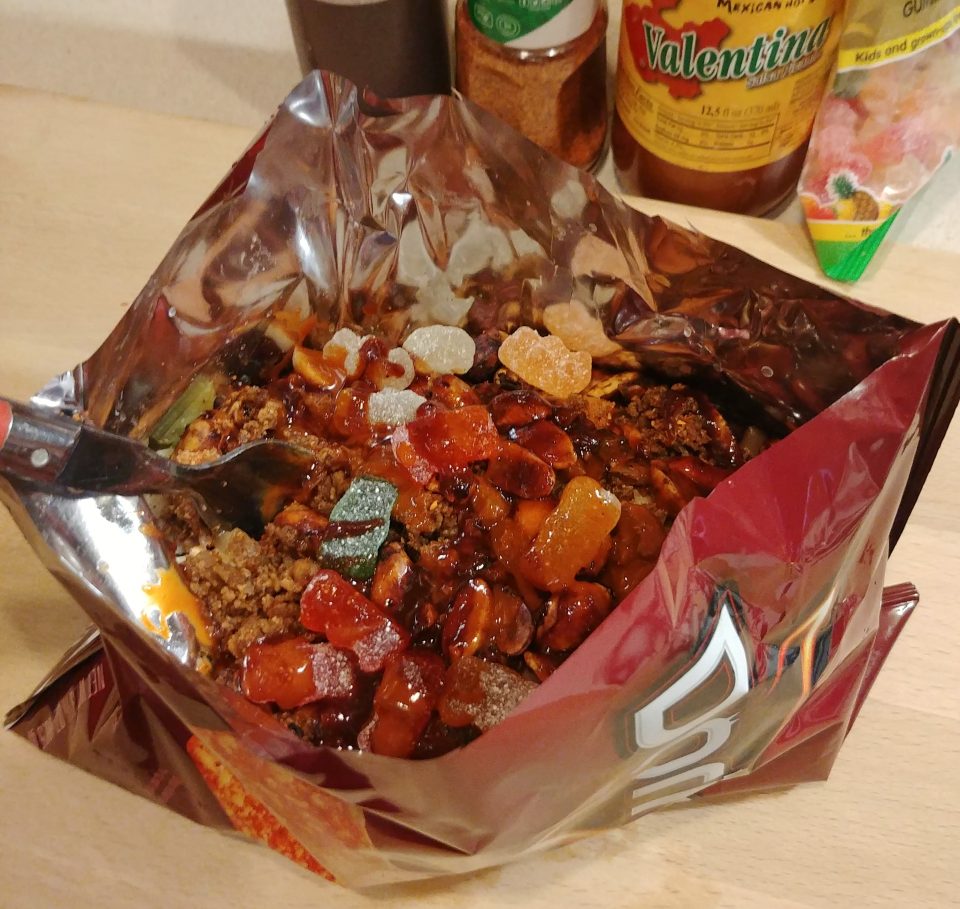 I first discovered it via Great Big Story’s video about street food in Mexico City. A South of the Border cousin to the Texas Frito Pie or Walking Taco, a bag of Doritos or Tostitos is cut open and traditionally filled with carrots, jicama, cucumber, pickled pork skin, and Japanese peanuts then topped with Chamoy (a sweet-sour-salty condiment made from pickled fruit), Valentina hot sauce, and Tajin seasoning. Some variations add a variety of sour and gummy candies, Cotija cheese, and whatever else suits the demented culinary plan of the maker. The result is a bag of sensory overload – sweet, salty, sour, chewy, spicy, crunchy heaven.

I have spent most of my professional cooking career making what I call “Drunk Comfort Food” though I’ve never really considered it might also fall into the Stoner Food category. The major difference I see between drunk food and stoner food is the purpose of the dish. Drunk Food often is about laying a base for or soaking up alcohol. Decadence and comfort are definitely in play, but not so much the sensory experience. Stoner food aims to satisfy one’s munchies but also to become a part of the stoned experience. As important as satisfying taste and comfort are to stoner food, it also needs one or more sensory elements to be truly great. Dorilocos hits six making it perhaps the Perfect Storm of Stoner Foods.

When it came time to put this together for Music & Food, there was zero question what the recipe would be called and what band got the inspiration nod. Mostly because, as I was working on the R&D, I kept repeating to myself “Don’t you know I’m Doriloco?” It’s the sort of thing that during my pro kitchen days would be amusing at first and then would drive my co-workers insane until I finally got bored with the joke. I honestly do not listen to a lot of stoner music. I’m a definitely not a stoner rock guy, and most of my stoner hip hop knowledge can be summed up as Dr. Dre’s The Chronic, Snoop Dogg and Cypress Hill. To be brutally honest, the inspiration for this recipe name is really Owen Wilson’s Hansel, but “Insane In The Brain” is actually one of my favorite Cypress Hill tracks.

With a general idea of what Dorilocos is and a name for the recipe, I hit the fridge to see what I had on hand to put a bag together. I decided early on I was not going to do a traditional recipe. There was zero chance I was going to use pickled pig skin. A search of the fridge yielded the following: pickled jalapeno slaw from the Underground Dog, Chamoy and carrot pickles from the Mexican Radio Dog, and Cauliflower Taco Crumbles from Cauliflower Love Taco Cups. All I needed was some peanuts and gummy bears and I was good to go. I pulled out an old bar nuts recipe to make some spiced peanuts rather than searching out Japanese peanuts.

I also made plans for a variation – Dorielotes. They swap out the sensory overload of ‘Locos with Mexican street corn toppings on the chips. I pan-fried some frozen corn, made quick mayo/sour cream taco sauce, and got some Cotija cheese when I grabbed the gummy bears. 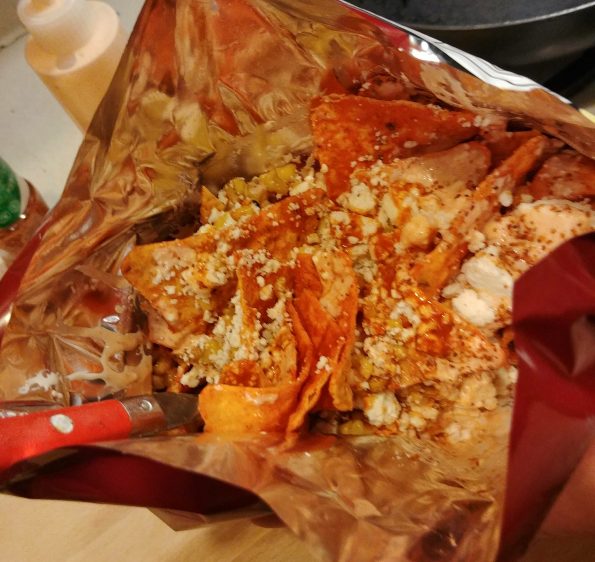 All said and done, I found both interesting with the Dorielotes being the easiest to wrap my head around. Dorilocos are definitely not your usual Frito Pie/Walking Taco. It’s a bit overwhelming with a lot going on. The biggest, and likely most obvious, disconnect was the sour gummy bears coated in hot sauce and Chamoy. There’s really no U.S. snack equivalent unless you’ve had more than your fair share of stoned culinary experiences. I have not, so that flavor/texture punch definitely threw me. Cherie (of We Can Tour That fame), bravely being my test kitchen guinea pig, reviewed the gummy bears as being “Wrong, Wrong, Wrong.”

Take a pair of scissors and cut the Doritos bag open along one of the long sides. This will turn the bag into a bowl for your Dorilocos. Now it’s time to get your Loco on!

Arrange the Doritos in the bag to allow for maximum toppings. Place a healthy portion of slaw on the chips. Add some carrot pickles then sprinkle in 3 tablespoons (or more) of the Cauliflower Taco Crumbles. Toss in a handful or two of Tajin peanuts and follow that with a couple of handfuls of Sour Gummy Bears. Top with Valentina (how much depends on how spicy you want) and a drizzle or four of Chamoy. Squeeze in a quarter lime and finish with a generous sprinkle of Tajin and a pinch or two of sea salt. Traditionally eaten with a plastic fork while walking, but equally as good with a regular fork while sitting on the couch during a Legion marathon.

Preheat your oven to 300°F. In a medium bowl, toss the peanuts, lime juice, and Tajin until peanuts are well coated. Spread peanuts on a lined baking sheet and place them in the oven. Turn oven off – the residual heat will toast the peanuts. Leave the peanuts in the oven for 15-20 minutes until dry.

If Doritos with slaw, pickles, peanuts, gummy bears, and more is a bit too stoner for your tastes, try this variation based on Mexican street corn.

Before assembling, saute a half cup of frozen corn in a skillet over medium heat. Cook until the corn is lightly browned and heated through. Set aside.

Take a pair of scissors and cut the Doritos bag open along one of the long sides. This will turn the bag into a bowl for your Dorilocos. Now it’s time to get your LocoElote on!

Arrange the Doritos in the bag to allow for maximum toppings. Place the pan-fried corn on top of the chips. Drizzle on a generous portion of Taco sauce. Add as much Cotija cheese as makes you happy. Finish with a solid couple of shakes of Tajin and Valentina. As with Dorilocos, the tradition is to eat these with a plastic fork while enjoying a walk in the park. They are also fine eaten with silverware while binge-watching Roku.

Combine all ingredients in a medium bowl. Whisk to thoroughly combine. Store in an airtight container in the refrigerator.