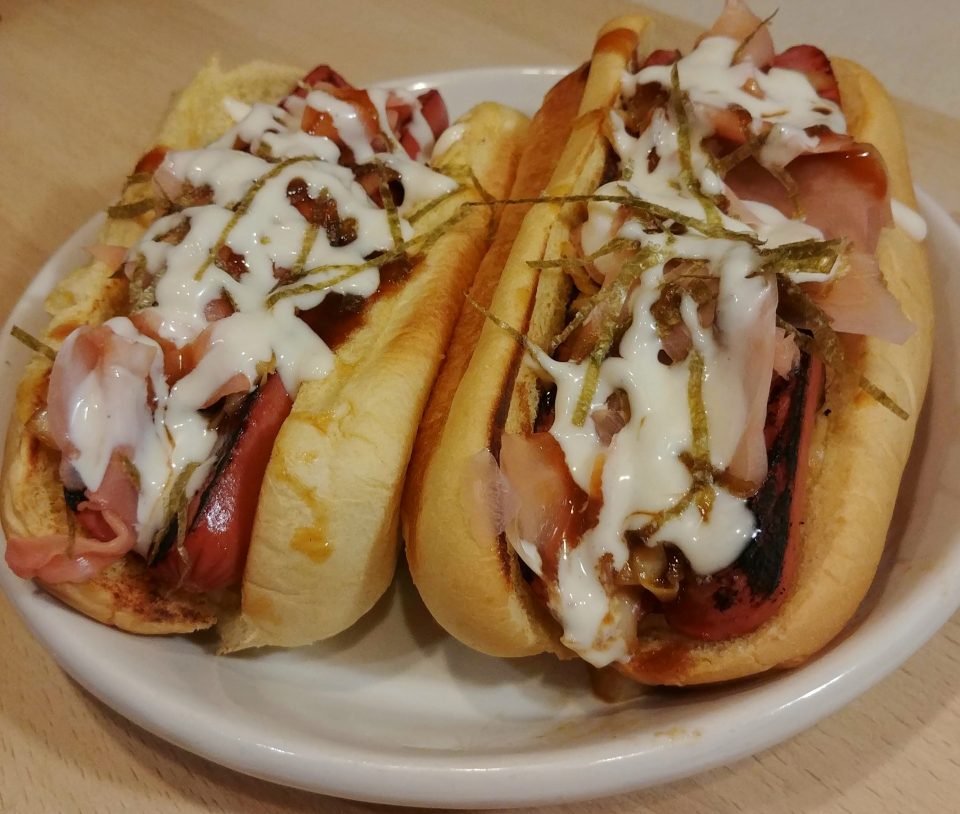 “Things are easy when you’re big in Japan”

When I considered making a Japanese-style dog, my first thought was to call it “Turning Japanese.” While an obvious choice, that name carries with it a few issues from a politically correct standpoint. If I’ve learned one thing working in hospitality over the years, you need to be proactive in avoiding public outcry – even if you don’t see what the fuss is all about. As “Turning Japanese” COULD be an issue if I did a BGC Hot Dog pop-up, I needed a different name.

So I shifted to the idea of “Hey, this is big in Japan” leading me initially to Tom Waits. I am a big Waits fan, but his song is a bit too dark and perhaps obscure for this dish. I knew there was another “Big In Japan” song from the ’80s – my go-to era for musical dish naming – and that leads me to Alphaville. Yep – the “Forever Young” guys. Personally, I was not much of a “Forever Young” fan and became less so as it became a defacto choice in movies and TV shows looking to strike a “nostalgic for my youth” tone. “Big In Japan” – while not as big a hit – is brilliantly angsty and overproduced. Exactly what I love in an ’80s track.

This hot dog is inspired by okonomiyaki, a Japanese savory pancake. As okonomiyaki ingredients vary by region, my goal was to capture the general flavors of okonomiyaki while sticking to ingredients found in my local grocery. Living in NYC, I am lucky to have access to a wide variety of Asian specialty markets so I could have found pretty much any traditional ingredient to make this dog. That may not be the case for someone outside of a major city. Sure – there’s the Interwebs and all – but I prefer to create accessible recipes where ingredients are easily found regardless of location.

My research resulted in a few common ingredients regardless of region: okonomiyaki sauce, Kewpie mayo, bonito flakes, and anori seaweed powder. I kept my shopping for the groceries in my neighborhood (Bushwick Brooklyn), and so I found none of these items readily available. I ended up ditching the bonito flakes – though if you find them, use them! – and swapped out the anori powder for roasted nori cut into fine strips.

That left the Kewpie mayo and okonomiyaki sauce. Once upon a time, I kept a bottle of Kewpie mayo in my fridge at all times. My Southern heritage makes me a lover of mayo and honestly, Kewpie mayo is a revelation. Thinner than a Duke’s or Hellman’s, it has an umami kick that makes it more a sauce than what we traditionally think of as mayo. It also includes a bit of MSG which has a completely undeserved bad rep. I was going to have to make Kewpie mayo – or at least some close approximation. While I’ve made mayo from scratch in commercial kitchens, I was not keen on making it at home – despite the relatively simple Serious Eats recipe. I chose to doctor some Hellman’s with a few items in the pantry. It’s a pretty decent knock-off and works perfectly fine with this hot dog.

Research for the okonomiyaki sauce resulted in a core of ingredients – ketchup, Worcestershire, oyster sauce, and some sort of sugar – with a variety of variations including soy sauce, ground ginger, dijon mustard, sake, and more. I kept my version simple swapping fish sauce for oyster sauce as I had fish sauce in the cupboard. I added a bit of mirin to kick up the sweetness.

For the finished dish, I went with a turkey dog (they were on sale) and Martin’s potato bun. Make sure to get a nice caramelization when cooking the cabbage and onions. I would not say this captures the taste of okonomiyaki but then again it’s a hot dog, not a pancake. It’s certainly one of the best dog recipes I’ve made to date even if it does require a few items not usually found in my pantry. The cabbage and onion mixture is like salty-sweet unfermented sauerkraut. The red pickled ginger like a palette cleansing pickle relish. The Kewpie mayo adds a nice tangy sauciness to balance the okonomiyaki sauce sweetness. The night I did this, I tested two other recipes. This was the night’s winner.

Despite what the photo might indicate. it’s far less messy than I thought it would be.

Two hot dogs (all beef is best for this, but turkey or veg dogs also are great for this. NO TOFU DOGS!)
Okonomiyaki sauce
Kinda Like Kewpie mayo (or real Kewpie Mayo if you can find it)
Red pickled ginger
Roasted Nori, sliced into bite-size strips

Prepare the hot dogs with your favorite method. I prefer charcoal grilled or butterflied and charred in a cast iron skillet. Toast a couple of potato buns. Divide the cabbage mixture evenly between the hot dog buns then top the mixture with a hot dog.  Top each hot dog with nori, red pickled ginger, Okonomiyaki sauce, and Kewpie mayo. Serve immediately.

In a medium bowl, mix all ingredients until thoroughly combined. Let rest at room temperature 15 minutes then transfer to an airtight container and store in the refrigerator.

In a medium bowl, mix all ingredients until thoroughly combined. Transfer to an airtight container and store in the refrigerator.

Heat oil in a medium-sized skillet over medium-high heat.  When the oil is hot add the onion and cabbage. Sauté until vegetables start to brown and slightly soften but are not soggy.  You want them to still have a slight bite. Lower heat and add the Okonomiyaki sauce and black pepper. Toss vegetables so they are completed coated with the Okonomi Sauce and the sauce starts to caramelize about 2-3 minutes.  Set aside.