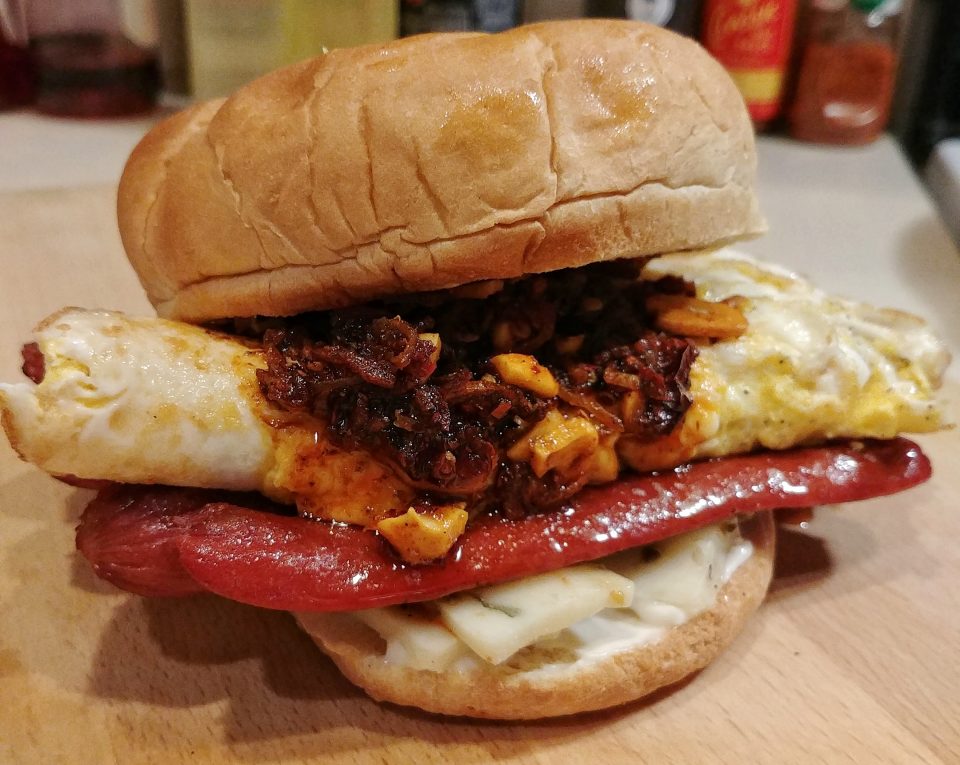 “There ain’t no doctor that can cure my disease”

The second appearance of Bon Jovi in the Music & Food series is perhaps my fave Jovi song.

Regardless of your level of music snobbery, there is little denying the sheer ’80s arena rock brilliance of Bon Jovi. The first four albums are some of the finest examples of big hair Jersey rock. The theme song here is an epic party song. A bar sing-a-long. A song you feel amazing in the moment of hearing and perhaps singing, but ultimately a little confused afterward about what you just heard. Was it actually good or just a big earful of greasy big hair arena rock?

The same can be said about this dish. From a straight-up “Dude I have a hangover, I need some culinary medicine” standpoint this is pretty solid. It’s gonna help with last night’s damage even as it fills you with a level of regret. If you’re eating this with a solid 8 hours slumber and looking forward to a constructive day, you’re fucked. This is going to take you down like a high school bully giving you a swirly while his buddies pants you.

You’d think meat, egg, cheese, and spicy sauce would just be a hillbilly BEC. You’d be wrong. It’s a culinary vampire sucking your very will to live after you finish it. Oh yes, it’s joyous spicy greasy decadence while you’re eating it. A supremely satisfying umami bomb. Then you’re done and time passes. And you are left to ponder why you ever chose to make this sandwich. Why you then chose to eat it. And, worst of all, why do you continue to be attracted to bad medicine.

Spread a generous amount of mayo on the bottom bun. Place the pepper jack on top of the mayo.

Split the hot dogs lengthwise leaving a hinge. Place them in a hot cast-iron skillet (or non-stick skillet), split side down until they lightly char. A grill weight works nicely for this or you can press with a spatula. Flip and char on the other side. Remove from the pan and place directly on top of the pepper jack.

Reduce the heat on the skillet to medium and add a bit of oil or butter. DO NOT clean out any hot dog grease. Crack two eggs into the pan and cook until the whites start to set up. Then break the yolks. Continue cooking until completely set and flip to cook the top side. You want a little color on the egg because it’s fried. (This is no time for some Gordon Ramsay fancy egg shit.)

When the eggs are done, remove them from the skillet and place them on the hot dogs. Top with a generous spoonful of chili crisp. Spread more mayo on the top bun and place it on the sandwich. Sit down with this and a few napkins and take comfort in knowing this is the worst decision you’ll make today.