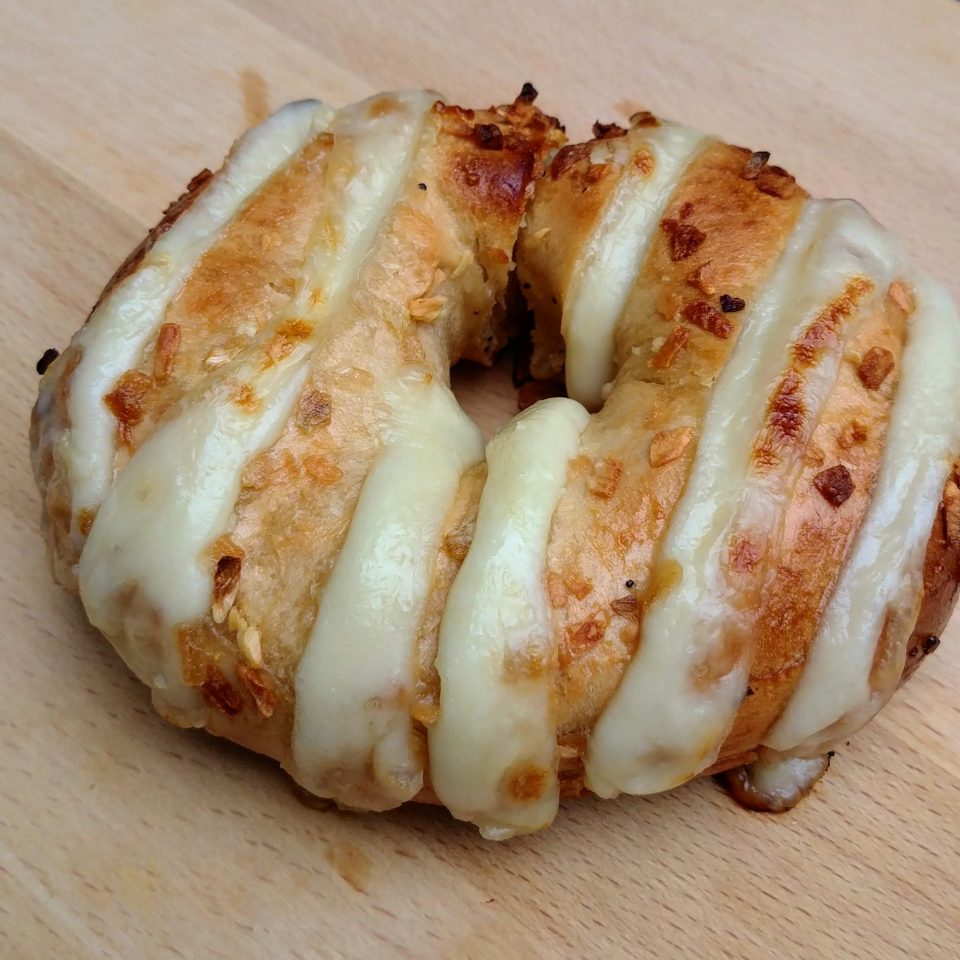 (“I always go for the underdog or the rogue or the rebel.”)

Once upon a time, I worked for a record label in the early years of what is now called EDM. In those days, it was called rave or whatever. My memory is fuzzy for a variety of reasons. What I do remember is these events had what was, at that time, called a “Chillout Room.” Somewhere off the main banging rave floor, usually draped in gauze & featuring bean bag chairs or large cushions, with a free supply of water to help those perhaps going too hard. These rooms featured DJs specializing in creating environments counter to the bangers on the main rave flavor. Chilled beats, nature sounds, quiet vocals. Basically the entirety of what we now know as Downtempo started in the chillout room of raves.

So, I was blissfully happy, when looking for a proper song name for this recipe, to find a brilliant example of the old school chillout room sound. I knew nothing about Ott before discovering him in a Spotify search for “bagel.” According to Wikipedia, he’s a “British record producer and musician who has worked with Sinéad O’Connor, Embrace, The Orb, and Brian Eno and has achieved recognition since 2002 for his own psychedelic dub tracks.” Fair enough, given this track comes from 2008, I understand why I never encountered Ott prior to this (my music biz days ended in 2001), but for anyone with a love for the world music meets chillout vibe, do yourself a favor and listen to Ott.

I named this the ROGUE BAGEL for a reason. This is an outlier, an outlaw, a misfit, to some an abomination.  Who the fuck cuts a bagel like this?!? Then TOASTS it!?! WITH MOZZARELLA & GARLIC BUTTER!!??!! You’re a fucking socio/psychopath, right??!!

Well, no, not really. (I mean sure I have my social issues but that has nothing to do with bagels…)

This is a bagel as a canvas. Sure, a brilliantly crafted bagel is a treasure, Warm it a bit (don’t toast it, bitch!) and give it a schmear with perhaps some lox, capers, tomato, or onion, but for fuck’s sake don’t TOAST it right? (I mean, even a clueless idiot knows not to toast a quality bagel.) Or perhaps you choose to break with the norm – get radical – GO ROGUE – and use the bagel to make a completely new dish. That is 100% the case here.

I initially encountered the idea of hasselbacking a bagel in a viral post about someone in the Midwest cutting bagels wrong. I’m definitely on Team Horizontal Cut here, if you’re just basically eating a bagel with cream cheese then vertical cuts are wrong. However, if you are going beyond the usual deli/bodega bagel, maybe looking into the realm of the bagel as a culinary base, then you’re heading into Rogue Bagel territory.

This recipe is my dorm room/hungover breakfast riff on the far fancier Hasselbacked Melted-Mozzarella and Garlic-Butter Bagels recipe from one of my favorite food sites, Serious Eats. That recipe starts by mincing garlic and making garlic butter then using that melted garlic butter to toast the bagel. Sure, that’s definitely a better method, but also one requiring prep and kinda real cooking.

I went with something a bit lazier, and by that, I mean simplified. This is a throwback to my college days. Small fridge. Toaster oven. A butter knife. Nothing else. Mix butter or margarine, garlic powder, and salt. Spread into vertically cut bagel abomination. Toast. Wedge cheese slices into cuts. Toast again to melt the cheese. Eat your rogue bagel without guilt. Go back to bed if you have a hangover.

I chose mozzarella for this, but any melty cheese will work. Got some leftover chicken in the fridge or Bac’n Bits on the shelf. Toss those in with the cheese. Drizzle hot sauce or ranch dressing. Sprinkle with Aleppo pepper. Whatever the hell you need to do to get your day started. The first rule of Rogue Bagel is there are no rules for Rogue Bagel.

Do What Thou Rogue Bagel Wilt Shall Be The Whole Of The Law.

You could make garlic butter on the stove, but that means creating a dirty pan. You could make a garlic paste with fresh garlic and salt then blend it into the butter which doesn’t require dirtying a pan but does mean too much prep work. Let’s keep this stupidly simple and think dorm room cooking. Mix some garlic powder and salt in softened butter or margarine and get on with your morning.

Using a serrated knife, make about 7 vertical cuts through the bagel, making sure not to cut all the way through to the bottom. Spread garlic butter into each of the bagel’s slits, distributing it evenly.

Place bagels on a rimmed baking sheet and bake until crispy and golden in spots, 7 to 10 minutes. Using a butter knife or bench scraper, pry open each bagel slit and stuff a slice of mozzarella down into it. (You may need to trim the mozzarella to fit in order to minimize overhang.)

Return to the oven and bake until cheese is melted, about 5 minutes longer. Serve warm.